Top Ten Tuesday is a weekly feature hosted by The Broke and the Bookish. Each week there is a new topic for bloggers to choose and list their top ten. This week’s theme is Top Ten Books I Enjoyed with Less Than 2000 Ratings on Goodreads.

Is 2000 a lot of ratings for a book on Goodreads? I didn’t think so and when I first saw this topic on The Broke and the Bookish website I didn’t think I’d be able to come up with five, let alone ten, books that I’d read and enjoyed with under 2000 ratings. So when I went on Goodreads, looked through my ‘Read’ list from both before and after I started blogging, I was surprised to find that I’d read a lot more books than I first assumed with less than 2000 ratings. 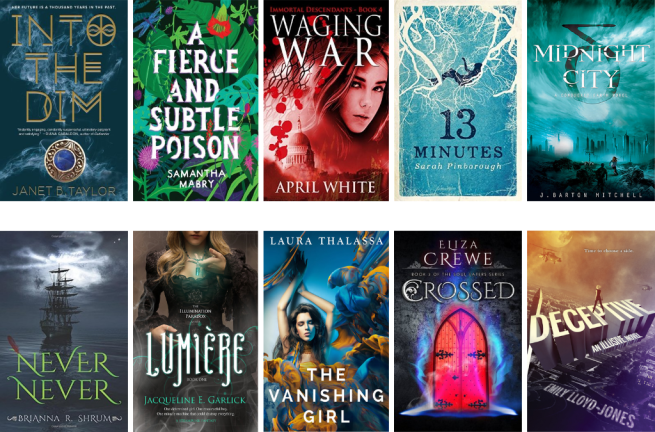 Into the Dim by Janet B. Taylor
1480 Ratings

A Fierce and Subtle Poison by Samantha Mabry
524 Ratings

I can’t say I was really surprised to see this book had less than 2000 ratings on Goodreads. While I enjoyed it, and see a lot of other people on WordPress who share my opinion, I don’t think it’s gotten a lot of recognition yet. As a magical realism book I won’t say A Fierce and Subtle Poison is my favourite but it’s a good story with an amazing setting.

This book, and the whole series for that matter, has not got the recognition it deserves. This is my all-time favourite time travel series; it has great characters, amazing plots, and the research that goes into the history is without fault. I picked up the first book because it was free on Kindle and immediately brought the rest of the series.

I got this book from NetGalley and even though it isn’t my usual genre it sounded interesting enough for me to pick it up. I ended up really enjoying this book; as a psychological thriller I was constantly trying to guess the ending, and even when I thought I knew what was coming I found myself shocked when the big reveal happened.

The Conquered Earth books are a mixture of sci-fi and dystopia, and while that may not sound like a ideal mixture it works with this series and I would highly recommend it to anyone who is a fan of either genre. The stories are good but I think it’s the world-building and the character development where each books really come into their own.

Fairytale retellings are another favourite genre of mine, but I was a little wary of this Peter Pan one after I read and DNF’ed Tiger Lily a few years back. However I couldn’t deny I was interested in this glimpse into Captain Hook’s mind. I really loved this book, I never thought I’d find myself sympathising with James Hook but by the end of this book I really felt for his character.

I haven’t really read many Steampunk books but Lumière is one of the ones I have not only read but really enjoyed. After finishing Lumière I started Noir, the second book in the series straight away, and after the cliff-hanger ending I am now waiting (im)patiently for the third book.

Laura Thalassa is one of those authors who’s books I binge read after falling in love with her work. The Queen of All That Dies was the first of her books I picked up, from there I went on to her Unearthly series and then The Vanishing Girl. Of all the books Laura Thalassa has released to date I think The Vanishing Girl is my favourite, plus the cover is gorgeous beyond belief.

This was probably the book that I was most surprised had under 2000 ratings on Goodreads. When I read the first in the series I was hooked; not only on the story but on Meda’s character and her ‘voice’. She is sharp, witty, hilarious, and I was constantly laughing aloud on the train to work as I read each book.

I really enjoyed the first book of this series so when the second was released I added it to my to-read list and couldn’t wait to get started. While the first book was good I felt the second was so much better, it felt like the stakes for all characters were a lot higher and I am excited to see where their stories go when the third book is released.

So what do you think? Did you take part in this week’s Top Ten Tuesday, if so let me know what some of your favourite under hyped books are.

29 thoughts on “Top Ten Tuesday: Top Ten Books I Enjoyed with Less Than 2000 Ratings on Goodreads”