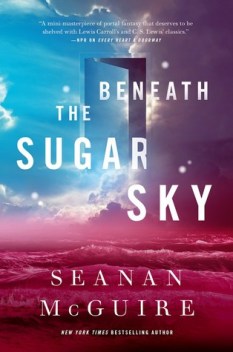 When Rini lands with a literal splash in the pond behind Eleanor West’s Home for Wayward Children, the last thing she expects to find is that her mother, Sumi, died years before Rini was even conceived. But Rini can’t let Reality get in the way of her quest—not when she has an entire world to save! (Much more common than one would suppose.)

If she can’t find a way to restore her mother, Rini will have more than a world to save: she will never have been born in the first place. And in a world without magic, she doesn’t have long before Reality notices her existence and washes her away. Good thing the student body is well-acquainted with quests…

A tale of friendship, baking, and derring-do.

Beneath the Sugar Sky by Seanan McGuire was published by Tor.com on January 9th 2018.

Unlike when I finished Every Heart a Doorway once I’d read Down Among the Sticks and Bones I jumped right into the next book. After expanding on the Jack and Jill’s backstory the third book in the Wayward Children series continues the main story arc started in Every Heart a Doorway, and it had everything I expected from a Seanan McGuire book; diversity, representation, beautiful writing, and a moving story which was emotional in ways I wasn’t prepared for.

“That makes no sense at all. That means it may well work. Go, my darlings, and bring your lost and shattered sister home.”

Cora is slowly adjusting to life back on land at Eleanor West’s Home for Wayward Children, but one day she sees the impossible; a girl falling from the sky into the pond. Rini is looking for her mother but her mother is already dead, and Sumi may have been murdered years before Rini’s conception but time doesn’t work in Confection the same way it does in Reality. Now Sumi’s death isn’t just un-writing Rini’s existence but un-writing everything Sumi achieved during her first time in Confection.

Rini isn’t like any other character we’ve been introduced to in the Wayward Children series. She is from a Nonsense world and the rules of Reality driven worlds don’t apply to her, she came all this way to save her mother and she doesn’t see why Sumi’s death should stop her. Together with Kade and Christopher, who we were introduced to in the first book, and Cora and Nadya Rini embarks in a quest to bring her mother back from the dead.

“Is it better, in Logic? Where time does the same thing every day, and runs in just one line, and your mother is always your mother, and can always wipe your tears and tell you that there, there, it’s going to be all right, you are my peppermint star and my sugar syrup sea, and I’ll never leave you, and I certainly won’t get killed before you can even be born?”

The representation in this book was incredible. We’re introduced to Cora, a plus sized girl struggling to cope with being thrown back into the real world and dealing with her anxiety which is rearing its head again now she’s back, and Nadya who is missing an arm and has been searching for her door for so long now but still won’t give up on it. All of the characters who travel with Rini are struggling with something, but they all have something to gain if Rini’s quest succeeds.

It’s hard for Rini to discover her mother is dead, especially when she only just saw her mother a few days ago before she ‘vanished’. The Sumi Rini is going to save however isn’t her mother, not yet, and it was a complicated situation which made for some complicated emotion for Rini to work through. I loved Sumi in the first book so I loved this story focused around her even if she wasn’t a part of it.

“We’re teenagers in a magical land following a dead girl and a disappearing girl into a field of organic, pesticide-free candy corn,” said Kade. “I think weird is a totally reasonable response to the situation. We’re whistling through the graveyard to keep ourselves from totally losing our shit.”

The world building is my favourite part of this series, and we get to explore more of it in this book than in the previous two combined. Rini doesn’t have to wait for a door, she has the ability to travel between worlds at will though there are limited number of trips she can make. Most of this book was spent in the world of a Confection, a world made of candy and cakes sounds like a child’s dream come try but McGuire takes it deeper than that.

“Confection could be Nonsensical because it had rules, and so Logical people could survive there, could even thrive there, once they had accepted that things weren’t quite the same as they were in other worlds.”

Through Rini we see the history, being re-written with Sumi’s death, and the religion, worshipping the Great Baker, of Confection. There are a lot of fairytale inspired stories or fairytale retellings out there at the moment but I haven’t read any quite like what Seanan McGuire writes; beautiful stories with well written characters and much needed representation. McGuire puts the characters themselves at the heart of her stories and they’re characters who stay with you long after you’ve finished reading.

Have you read Beneath the Sugar Sky, or is it still on your TBR list?

Would a place like Confection be a dream come true for you, or if not is there another kind of food you’d love to see a world made up of? Did you like Rini’s character, what did you think of her journey in this book?

Have you read any of Seanan McGuire’s other releases, which is your favourite?

11 thoughts on “Beneath the Sugar Sky”