Top Ten Tuesday is a weekly feature hosted by The Broke and the Bookish. Each week there is a new topic for bloggers to choose and list their top ten. This week’s theme is a Father’s Day related freebie, so I picked Top Ten Father/Child Relationships in YA Books.

A little while ago there was a Mother’s Day themed free-for-all and I did Top Ten Mother/Child Relationships in YA Books, so I figured now it was time to feature the best father’s in YA books. Again not all of the father/child relationships I featured this week are happy, loving and perfect, but they were all amazingly written. 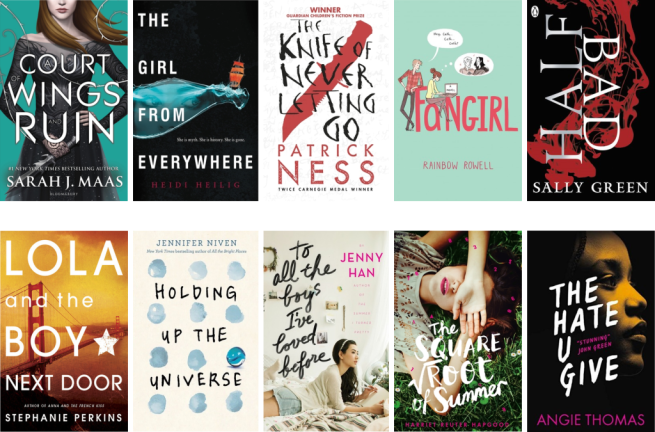 A Court of Wings and Fury by Sarah J. Maas

In the first two books Feyre’s father is not a good one. In A Court of Thorns and Roses he is neglectful, mourning everything he lost, and in A Court of Mist and Fury he is halfway across the world. However he pulls through for his daughters in A Court of War and Ruin, and what he does for them shows how much he cares and that he wants them safe in a dangerous world.

The relationship between Nix and her father is not a healthy father/daughter one. With her father chasing after the ghost of her mother Nix has taken over the parental role in their relationship. Blake is neglectful and dismissive of his daughter’s fears over what could happen if he finds her mother, but there are moments when you can see how he cares for her in his own way.

The Knife of Never Letting Go by Patrick Ness

Despite only having a small part at the beginning of The Knife of Never Letting Go Ben and Cillian, Todd’s adoptive fathers’, are extremely important to his character development throughout the entire series. It is Todd’s memories of Ben and Cillian that later end up saving him in so many different ways when facing the Spackle and the Mayor.

Cath and Wren both have a strong relationship with their father, and it was interesting seeing that relationship change when they went to university. Cath becomes more and more concerned about her father with so many miles between them, whereas Wren pushes her newfound freedom from both her sister and her father to its limits.

Nathan’s search for his father is an important part of the story and his character development. The way Nathan thinks of his father is the way any child abandoned by a parent would; imagining scenarios which explain their absence or brings them back. Despite Marcus not being present in the first book seeing their relationship through Nathan was interesting to read.

Lola and the Boy Next Door by Stephanie Perkins

Lola has an incredibly close relationship with both of her fathers. She respects their opinions and at the beginning of the book it is extremely important to her that they give her relationship with Max their blessing. In turn they give her the space needed to fully express herself, and explore her personality and her ambitions.

Holding Up the Universe by Jennifer Niven

After losing her mother it seemed like Libby’s father forgot how to speak to his daughter, how to help her deal with the pain of what she was going through. Then Libby became “America’s Fattest Teen”  and now she’s in a better place her father is determined not to make the same mistakes again and try to grow a better relationship with his daughter.

After losing their mother Lara Jean’s father works hard to keep her and her sister’s in touch with that side of their culture; he cooks Korean food for them and they all celebrate Korean thanksgiving with their extended family. It’s not a major part of the story but it shows a lot about how he values his daughters’ heritage and culture.

The Square Root of Summer by Harriet Reuter Hapgood

Although Gottie has a good relationship with her father the one I’m featuring for this week’s Top Ten Tuesday is her relationship with her grandfather. After losing him Gottie is a little lost and determined to bottle up everything she feels . Grey was an important part of her life, almost more of a father figure to her than her actual father was.

So what do you think? Did you take part in this week’s Top Ten Tuesday, if so let me know what you picked for this week’s themed free-for-all, or what your favourite father/child relationships in YA are.