Top Ten Tuesday is a weekly feature hosted by The Broke and the Bookish. Each week there is a new topic for bloggers to choose and list their top ten. This week’s theme is a Mother’s Day related freebie, so I picked Top Ten Mother/Child Relationships in YA Books.

I love seeing strong familial relationships in books, unfortunately in fantasy stories that’s an aspect that seems to be missing. I guess it’s hard to risk your life saving the world when you have a loving family at home worrying for you. Not all of the mother/child relationships I featured this week are happy, loving and perfect, but they were all amazingly written. 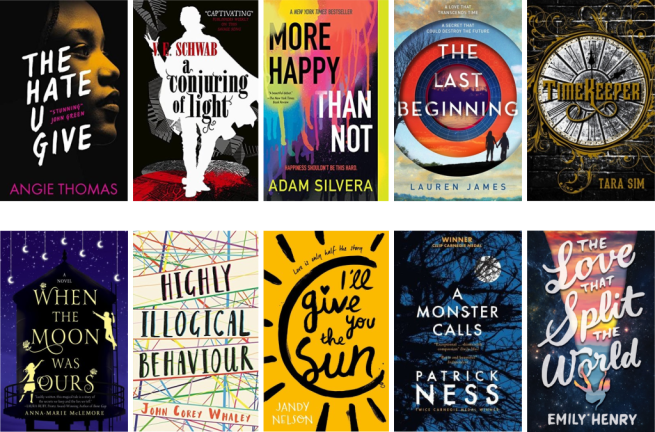 Starr finds herself in a very dangerous situation in The Hate U Give, but throughout it all her mother is by her side. She offers her daughter endless love and support no matter where Starr’s decisions take her. Starr’s mother only wants the best for all her children, and she works hard to convince her husband that Garden Heights isn’t a place that can offer that.

A Conjuring of Light by V.E. Schwab

In the first two books the Queen was always a distant character, and it is only in A Conjuring of Light that we see parts of the story from her point of view and see beyond the surface of her character. She feared being a mother but loves Rhy, and it was that love that made her sacrifice one son to protect the other.

More Happy Than Not by Adam Silvera

Aaron’s mother seems to be struggling after the death of his father. She spends all her time at work and doesn’t have any left for either of her sons. However it is only after you reach the twist halfway through More Happy Than Not that you realise what Aaron’s mother has done, what she has sacrificed, for her younger son and you see the level of devotion she has for him.

The Last Beginning by Lauren James

Clove may not be Jen’s daughter but she always believed she was. The two have a close mother-daughter relationship and the turmoil of finding out she was adopted is a big part of Clove’s story and her development throughout The Last Beginning. While Clove isn’t Jen’s daughter the two have a close relationship, and it just goes to show it isn’t blood that makes a family.

The relationship between Danny and his mother is a cold one. After his father was trapped in Maldon the two stopped talking, unable to cope with the loss of someone who is still alive but unreachable. They each made small attempts to reach out to the other but it never seemed to be enough and made their interactions heartbreaking to read at times.

When the Moon Was Ours by Anna-Marie McLemore

Like More Happy Than Not the relationship we see between Sam and his mother shows a woman who is willing to do anything, go to any lengths necessary, for her son. No matter the decision he makes, who he decides to be at the end of the day, Sam’s mother supports his every choice and makes sure he knows he’s loved no matter what.

Solomon has agoraphobia and hasn’t left his house in three years. He spends a lot of time with his parents as a result and the relationship the three of them have is an incredibly close-knit one. His mother wants him to get better, to be able to walk out of the house again, but she doesn’t push him. She accepts everything about her son and does everything in her power to try and help him.

I’ll Give You the Sun by Jandy Nelson

A Monster Calls by Patrick Ness

Take away the monster, its stories and its lessons, and this book is about Conor and his mother. With his mother ill and getting worse Conor needs to try and accept the inevitable, but when it’s only ever been the two of them against the world it’s hard for Conor. A Monster Calls is a heartbreaking book for so many reasons, but it’s also an incredibly beautiful story.

The Love That Split the World by Emily Henry

Natalie is adopted, but like Clove and Jen from The Last Beginning this doesn’t mean she’s any less loved by her mother than either of her siblings who weren’t adopted. It’s obvious from the amount of care Natalie’s mother puts into making sure her daughter is in touch with her culture and heritage that she loves Natalie.

So what do you think? Did you take part in this week’s Top Ten Tuesday, if so let me know what you picked for this week’s themed free-for-all, or what your favourite mother/child relationships in YA are.