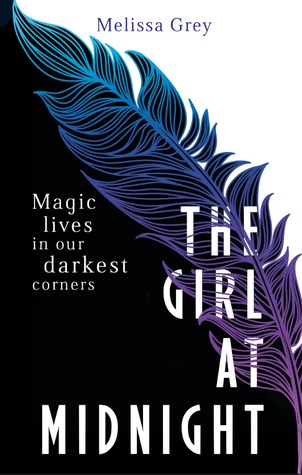 Title: The Girl at Midnight

Series: The Girl at Midnight, #1

Beneath the streets of New York City live the Avicen, an ancient race of people with feathers for hair and magic running through their veins. Age-old enchantments keep them hidden from humans. All but one. Echo is a runaway pickpocket who survives by selling stolen treasures on the black market, and the Avicen are the only family she’s ever known.

Echo is clever and daring, and at times she can be brash, but above all else she’s fiercely loyal. So when a centuries-old war crests on the borders of her home, she decides it’s time to act.

Legend has it that there is a way to end the conflict once and for all: find the Firebird, a mythical entity believed to possess power the likes of which the world has never seen. It will be no easy task, but if life as a thief has taught Echo anything, it’s how to hunt down what she wants…and how to take it.

But some jobs aren’t as straightforward as they seem. And this one might just set the world on fire.

The Ala held out a hand to Echo. “Remind me, child, have I ever told you the story of the firebird?”

Echo lives with a foot in two worlds; in one she is a homeless child, making her own space in the library and stealing whatever she needs to get by, and in the other she lives among the Avicen, seeing them as her family despite her lack of feathers. One day though, while stealing a gift for the Ala, Echo comes across a map that sends her on a hunt across the world for the firebird.

Her first stop is Japan where she receives the next map to continue her journey but comes face to face with one of the Drakharin generals and sets a very dangerous enemy on her tail. Echo is not the only one searching for the firebird, and now the Drakharin know who the Avicen have sent after it they know who they should go after.

Unfortunately it isn’t Echo who’s caught in their trap, but her best friend Ivy.

“Now, fighting fuels more fighting, and hatred breeds more hatred. It almost doesn’t after why the war began. We’ve fought for so long that I fear we’ve forgotten how to do anything else.”

As both sides move closer and closer to the firebird Echo finds herself outcast from the Avicen and teaming up with two Drakharin who have found themselves outcast from their own people. It’s a race to track down the firebird first. As they travel across the world, following the clues they piece together from the maps, Echo, Ivy, Caius, Dorian and Jasper run into more problems than answers and put their lives are put at risk for what they believe in.

I’ve seen this book compared to both The Mortal Instruments series and Daughter of Smoke and Bone, and while I did notice comparisons to both series in The Girl at Midnight this is still a very separate book with very separate characters and stories. This was a re-read for me before moving onto the second book in the series but I enjoyed it just as much, I was hooked from the first page and remained so right until the very end, following Echo and her miss-matched team through all the twists and turns and through all the countries they travelled to on their quest.

“Echo looked around at her sea of tomes, and a single word came to mind: tsundoku. It was the Japanese word for letting books pile up without reading them all.”

Echo has lived among the Avicen and with the Ala since she was a child, but she is very aware that she is not one of them. Instead of making her home in the nest she stays in the library where she was found all those years ago, separate from the Avicen and alone in many ways. Still Echo’s loyalty is to the Avicen first, despite her lack of feathers, and when the Ala sends her on a quest she obeys, keeping her actions a secret from everyone.

As the story commences Echo is forced to make some tough decisions, but she makes them believing that she will be forgiven when she returns triumphant with the firebird. It’s only after something more serious happens, that changes Echo as a character and what side she sees herself fighting for, that she starts to wonder whether once all this is over if she’ll be able to return home.

“War is like a drug,” he said. “You spend so long chasing victory that you become blind to the fact that you’ll never find it. It had never even occurred to me that peace was possible…”

Caius, despite fighting in the war for decades, believes in peace and he sees the firebird as the only way to achieve that peace. Caius almost believes he is untouchable in his position, but there are other Drakharin who don’t believe in the firebird the way he does and who see his vision as nothing more than a fool’s dream. Still he doesn’t give up. Caius knows there are people on both sides who will refuse to give up the war unless they have no other choice.

“And do you find me monstrous?”
She could have lied, but he’d see right through it. He didn’t come across as the sort you could sneak a falsehood past. “The devil is not as black as he is painted.”

The tension between the Avicen ad the Drakharin was visible first hand in the relationships between Caius and Echo, and Dorian and Ivy. They are on separate sides of this war and despite being forced to work together they are still wary among each other. It was the scenes between Ivy and Dorian which were the best written in my opinion. There was nothing romantic about their interactions, nor will there ever be, but there is more tying them together and it was interesting seeing the way they interacted with one another after what happened between them when they were still on separate sides of the war.

The relationship between Caius and Echo had a little bit of an insta-love feel to it. Despite being on different sides of the war the two learn to trust and rely on one another very quickly. There is also something of a love triangle but it wasn’t given much development in this book. It may in the second which is why I mentioned it but in terms of burgeoning relationships I was more interested in the secondary characters than I was the main ones.

“Temples sat beside glass skyscrapers, while certain streets, like the one she currently stood on in the Pontocho district, were so well preserved that they were like portals back in time. A hundred years had passed, and still the teahouse to which the map had pointed stood, exactly where Echo had expected it to be.”

The Girl at Midnight takes us all over the world; from Pontocho in Japan to the Louvre in Paris to the MET in New York. We see deep into the world where the Avicen and the Drakharin make their homes, and we learn a little about the magic that surrounds both species. However as much as I loved all the different locations we saw along the way it would have been interesting to learn more about the history of the Avicen and the Drakharin. We were told a war had been brewing for decades but there was no back-story behind it; how did it start, what happened that was so terrible it forced these people into a war? I’m hoping we get some more back story in the next book. It would certainly be interesting to read.

Overall The Girl at Midnight was a great start to this series. I didn’t connect with the main characters as much as I did the secondary ones but the story was engaging and the world, if not the history, was intriguing to say the least. After the way this one ended I can’t wait to get started on the second book in this series and find out what’s in store for all the characters I’ve met so far.

What did you think of The Girl at Midnight? Was it a favourite of yours or could you just not get into the story? Let me know.

45 thoughts on “The Girl at Midnight”