Top Ten Tuesday is a weekly feature hosted by The Broke and the Bookish. Each week there is a new topic for bloggers to choose and list their top ten. This week’s theme is Top Ten Recommendations for …

Rather than do recommendations for a specific genre or group of people, like the prompt suggested and like I have in the past, I’m doing recommendations based on books. It’s a ‘if you liked this book check out these books’ Top Ten Tuesday post.

Top Ten Tuesday has been on hiatus for a month and a half, and while some people were still taking part in the weekly feature during that time I was not one of them, so it’s nice to have some prompts again to post my top ten on a Tuesday.

END_OF_DOCUMENT_TOKEN_TO_BE_REPLACED

Top Ten Tuesday is a weekly feature hosted by The Broke and the Bookish. Each week there is a new topic for bloggers to choose and list their top ten. This week’s theme is Top Ten Books I Wouldn’t Mind Santa Leaving Under My Tree.

However because I had trouble coming up with what I thought was an original list, honestly any book I’ve ever featured on a Top Ten Tuesday post of my favourites would be a book I’d love Santa to leave under my tree, I decided to do something a little different. A few weeks ago I did a Top Ten Tuesday post on gift ideas for book lovers and this week I decided to continue with that topic; and have picked ten books to gift people, rather than ten bookish goodies.

END_OF_DOCUMENT_TOKEN_TO_BE_REPLACED

Top Ten Tuesday is a weekly feature hosted by The Broke and the Bookish. Each week there is a new topic for bloggers to choose and list their top ten. This week’s theme is Top Ten All Time Favourite Books in the … Genre.

When I saw this week’s theme it took me a while to actually come up with a genre to which I could feature my favourite books. I’d already used my favourite genres for previous Top Ten Tuesday themes – fairytale retellings, mythology, fantasy, sci-fi – and I had no new ideas. Then I came up with YA contemporary. It’s a genre I’m slowly exploring more of and I have read some amazing books that have not only become all-time favourites of mine but that I will be going back and re-reading at some point.

END_OF_DOCUMENT_TOKEN_TO_BE_REPLACED

When I read The Boy Most Likely To at the beginning of this year I loved it, even more than the previous companion novel My Life Next Door. Tim’s journey throughout was so wonderfully written, so moving, and it made the whole book felt real and incredibly well developed. Of course I jumped at the chance to take part in this challenge; despite the facts that The Boy Most Likely To has been released for a while now and that it’s taken me a long time to get around to this tag. 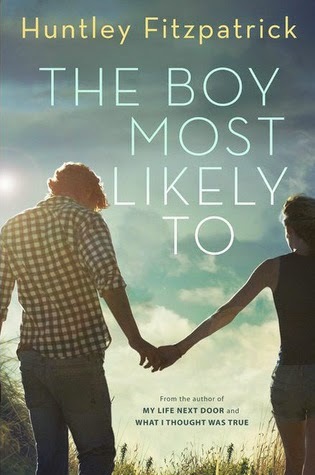 He’s a kid. Not a man, not on some deadline. But with his jaw set and raised—I know that face. The I’m going to push on through, no problem, I’ll deal. Moving right along. Nothing to see here face. Know it as well as my own. It is my own. And I picture the rest of the lines on that paper.

Tim Mason: The Boy Most Likely To…
Forget his own name even before we do
Turn down the hottest girl in the world for the coldest beer
Be six feet under by our fifth reunion

Don’t go that way, Tim. Such a stupid, stupid waste.

END_OF_DOCUMENT_TOKEN_TO_BE_REPLACED

Top Ten Tuesday is a weekly feature hosted by The Broke and the Bookish. Each week there is a new topic for bloggers to choose and list their top ten. This week’s theme is Top Ten Books I Picked Up On A Whim.

I tend to not pick up books on a whim much. I get recommendations from my friends and from Goodreads, read new books by authors I already love, and when I do find a new books I always wait and anticipate and hype up its release. I did think this week’s topic was going to be a real challenge but when I started looking through the books I’d read recently I was surprised when there were more than a few which I started reading (or brought) on a whim. END_OF_DOCUMENT_TOKEN_TO_BE_REPLACED

While I can’t imagine being stranded on a desert island would be my idea of a good time I love travelling, my last holiday was to Cancun Mexico where I spent a lot of time on the beach, so this was the perfect tag for me. Also to be honest I’d rather be on a beach right now, desert island or not, than in freezing cold England.

I was tagged by Jesse at Books at Dawn; thank you so much for the tag Jesse. You can check out his post via the above link and you should definitely check out his blog while you’re there.

END_OF_DOCUMENT_TOKEN_TO_BE_REPLACED

Top Ten Tuesday is a weekly feature hosted by The Broke and the Bookish. Each week there is a new topic for bloggers to choose and list their top ten. This week’s theme is Top Ten Characters I Didn’t Like.

There aren’t really any characters that I love whom everyone else seems to hate, and likewise there aren’t any characters I hate whom everyone else seems to love so I decided to highlight some of the characters I didn’t like. Some are character we’re supposed to hate, some just made bad decisions, and some I just didn’t click with. But there are a few who I thought had terrible character development and that actually the story would have worked better without them.

END_OF_DOCUMENT_TOKEN_TO_BE_REPLACED

Top Ten Tuesday is a weekly feature hosted by The Broke and the Bookish. Each week there is a new topic for bloggers to choose and list their top ten. This week’s theme is Top Ten Books I Enjoyed Recently That Weren’t My Typical Genre.

Last year I didn’t really read many books that went out of my comfort zone. So to rectify that, and also to see if there’s another genre I would end up loving as much as I do fantasy, one of my New Year’s Resolutions was to branch out and read more books I wouldn’t normally pick up. For this week’s Top Ten I have highlighted five books I read recently that weren’t my typical genre and five books that are on my to-read list which, hopefully, I’ll be able to get around to soon. 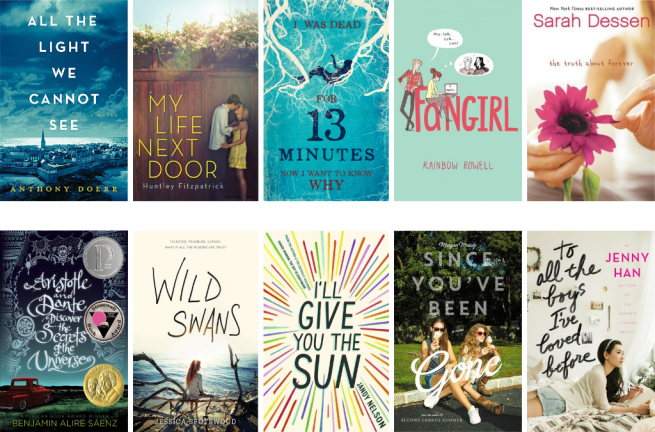 END_OF_DOCUMENT_TOKEN_TO_BE_REPLACED

Top Ten Tuesday is a weekly feature hosted by The Broke and the Bookish. Each week there is a new topic for bloggers to choose and list their top ten. It was a Valentine’s Day themed free pick this week so I chose; Top Ten Favourite YA Couples from Books I’ve Read in the Past Year.

I have a lot of OTP’s and it was a real challenge to narrow it down to just ten. Looking through my ‘Read’ list on Goodreads I saw so many amazing books, all full of amazing characters and amazing relationships; it was nearly impossible to choose. Some of my picks for this week are couples from standalone books or finished series so I know how their stories end, but there are a few from series where the last book is still to be released and I am desperate to find out how it ends, hoping for a happily ever after.

END_OF_DOCUMENT_TOKEN_TO_BE_REPLACED

Title: The Boy Most Likely To

Tim Mason was The Boy Most Likely To find the liquor cabinet blindfolded, need a liver transplant, and drive his car into a house

Alice Garrett was The Girl Most Likely To…well, not date her little brother’s baggage-burdened best friend, for starters.

For Tim, it wouldn’t be smart to fall for Alice. For Alice, nothing could be scarier than falling for Tim. But Tim has never been known for making the smart choice, and Alice is starting to wonder if the “smart” choice is always the right one. When these two crash into each other, they crash hard.

Then the unexpected consequences of Tim’s wild days come back to shock him. He finds himself in a situation that isn’t all it appears to be, that he never could have predicted…but maybe should have.

And Alice is caught in the middle.

Told in Tim’s and Alice’s distinctive, disarming, entirely compelling voices, this novel is for readers of The Spectacular Now, Nick and Norah’s Infinite Playlist, and Paper Towns.