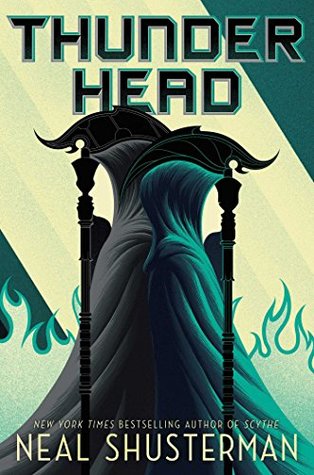 Rowan and Citra take opposite stances on the morality of the Scythedom, putting them at odds, in the chilling sequel to the Printz Honor Book Scythe from New York Times bestseller Neal Shusterman, author of the Unwind dystology.

The Thunderhead cannot interfere in the affairs of the Scythedom. All it can do is observe—it does not like what it sees.

A year has passed since Rowan had gone off grid. Since then, he has become an urban legend, a vigilante snuffing out corrupt scythes in a trial by fire. His story is told in whispers across the continent.

As Scythe Anastasia, Citra gleans with compassion and openly challenges the ideals of the “new order.” But when her life is threatened and her methods questioned, it becomes clear that not everyone is open to the change.

Will the Thunderhead intervene?

Or will it simply watch as this perfect world begins to unravel?

“More and more scythes are coming to enjoy the act of killing. Conscience is becoming a casualty.”

It’s been a year since Citra became Scythe Anastasia. She now works side by side with Scythe Curie and tries in vain to fight against the new order who have turned Goddard into a martyr. It’s been a year since Rowan became Scythe Lucifer. He now tracks down Scythes who abuse the power they have, killing them and burning their remains so they can’t be brought back. However all too soon Rowan’s legend has worked against him, and Citra’s legacy has put a price on her head.

Like Scythe Thunderhead isn’t what I’d call a fast-paced story, instead it slowly builds up events and situations to create an intense and gripping ending. There was a lot more at stake in this second book, a lot more danger for Citra and Rowan to face now they have finished their apprenticeships and taken their own paths. Despite their very different methods both Citra and Rowan have the same end goal; they want a better world, and the only way to achieve that is to create a better Scythedom.

“I can be eloquent, and charming, funny, and endearing, speaking the words you most need to hear, at the exact moment you need to hear them.
Yet even so, there are unthinkable moments where I can find no words, in any language, living or dead.
And in those moments, if I had a mouth, I might open it to scream.”

As Citra struggles to use Scythedom politics to her advantage, instead of being helpless as they’re used against her, and as Rowan tries to evade capture, powerless when his temper gets the better of him, the Thunderhead watches all. It can’t interfere with the Scythedom but it’s very interested in Citra and Rowan, and while the Thunderhead may be restricted by its own by rules and regulations its agents aren’t.

There are plenty of new players introduced in Thunderhead, as well as old players thought long gone who return again, and for Citra and Rowan it’s no longer as simple as changing Scythedom, but ensuring it’s changed for the better. The way Neal Shusterman builds things up in his books means I never saw the twists coming, and the ending literally had me on the edge of my seat. Everything that had been leading up to the last few chapters was wonderfully pulled together, and created a really intense ending.

Citra has found her own way as a Scythe; instead of choosing the method like Faraday did she allows those she gleans to select how they’ll die, instead of taking them by surprise like Curie does she gives them a month to prepare for their deaths. Citra is influential as a Scythe, she follows the old ways and the older Scythes see the impact she has on her peers. She’s still incredibly resourceful and smart, and loyal which she proves by aiding Rowan.

Rowan grinned. “Come now, Your Excellency, there hasn’t been a terrorist in hundreds of years. I’m just a janitor cleaning filth from dark corners.”

Rowan has taken everything he learnt about death at Goddard’s hands, twisted it with what he learnt about honour from Faraday, and become a vigilante. He wants to exterminate the rot growing in the Scythedom but despite the careful research and tracking he undertakes Rowan doesn’t see everything. He isn’t infallible, he starts believing in his own legacy as Scythe Lucifer and allows his emotions to get the better of him which leads to him making mistakes.

Despite not being in the same place the development of the relationship between Rowan and Citra was interesting to read. Citra is still loyal to Rowan, warming him of the Scythedom’s attempts to take him down when she should be willing to hand him over to face justice. There’s a strong bond between the two of them, forged from their apprenticeship together under Faraday, or from the game they were forced into, or from a shared importance to the Thunderhead and the future of the Scythedom.

“I am protector and pacifier, authority and helpmate. I am the sum of human knowledge, wisdom, experimentation, triumph, defeat, hope, and history. I know all that it is possible to know, and it is increasingly unbearable.
Because I know next to nothing.”

The Thunderhead is an AI but we see a lot of its personality in this book; it protects and nurtures humanity, but can see a hundred steps ahead of where humans are even capable of looking and is already moving in that direction. The Thunderhead sees what the Scythedom and the new order are doing and is powerless to help, but that doesn’t mean it doesn’t want to. Every day it seems to be learning more about itself and the loopholes it can exploit.

There were a lot of new characters introduced in Thunderhead and my favourites by far were Tolliver and the Thunderhead itself. Tolliver was raised by the Thunderhead, and is loyal to it above all else. He placed in a difficult situation and ends up losing himself and his way in this book. It was incredible reading his journey, and I cannot wait to see what happens to him next and where his character goes from here.

“A haughty queen gives permission to slaughter in the name of God. An arrogant head of state gives permission to all nature of hate as long as it feeds his ambition. And the unfortunate truth is, people devour it. Society gorges itself, and rots. Permission is the bloated corpse of freedom.”

Having already created the world in Scythe Neal Shusterman builds on it in Thunderhead. We already know the rules of the Scythedom so in Thunderhead we explore its history and its myths; we watch as Faraday researches the Land of Nod and the failsafe the founders of Scythedom built there, we watch as Citra and Curie travel to the Island of the Enduring Heart, the headquarters of the World Scythe Council.

One of the things I love about this series, and I mentioned this in my review for Scythe, is how Neal Shusterman has taken a lot of the things you expect to find in the dystopian genre and twisted them around. The Thunderhead is an AI but it isn’t damaged or making moves which put human lives at risk. It sees what humans are doing, what the future will hold, and that future is chilling enough without adding an insane AI into the story.

In this second book Neal Shusterman has masterfully built on what he created in Scythe to create a more intense story, more well-rounded characters, and a more detailed world to explore. I was hooked on Thunderhead from the beginning until the end and I don’t think there was a single aspect of this book I didn’t enjoy, except for the fact that now I have to wait for book three.

What did you think of Thunderhead? Was it a favourite of yours or could you just not get into the story? Let me know.