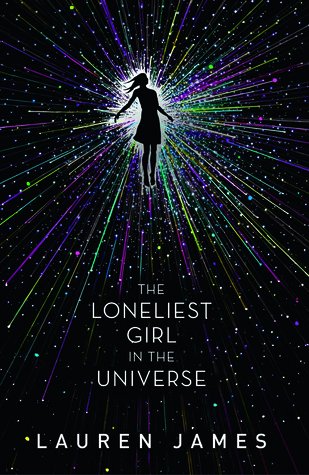 Title: The Loneliest Girl in the Universe

Can you fall in love with someone you’ve never met, never even spoken to—someone who is light years away?

Romy Silvers is the only surviving crew-member of a spaceship travelling to a new planet, on a mission to establish a second home for humanity amongst the stars. Alone in space, she is the loneliest girl in the universe until she hears about a new ship which has launched from Earth—with a single passenger on board. A boy called J.

Their only communication with each other is via email—and due to the distance between them, their messages take months to transmit across space. And yet Romy finds herself falling in love.

But what does Romy really know about J? And what do the mysterious messages which have started arriving from Earth really mean?

Sometimes, there’s something worse than being alone…

“Another ship. It’s the best news I could ever have imagined.
Who are they going to send? Who’s coming?
I stare out of the helm window, straining my eyes against the infinite blackness, pressing my fingernails into my palms so hard they sting. I can’t see anything except the silver pinprick stars.”

The only life Romy has known has been life aboard The Infinity. She was born on the spaceship travelling to Earth II and ever since her parents died when she was eleven she’s been on her own. Her only contact is with Molly, her counsellor back on Earth, until she receives news from NASA that another spaceship has been launched to join Romy on her journey to Earth II.

The Eternity is faster, not only will it catch up with Romy’s ship in a year but it will enable them both to travel to Earth II much quicker. Instead of arriving at the planet when Romy is forty she’ll be twenty. The closer The Eternity gets the more Romy is able to communicate with the only passenger aboard, J. As they send back and forth emails that take months to arrive Romy finds herself falling in love with J.

“I don’t think I’m being told the whole story.
Suddenly I feel lonelier than before the message arrived.
I miss Molly.
I need to talk to J.”

However there’s something happening on Earth that, even millions of light years away from where The Infinity now is, is affecting Romy. Things are changing with The Eternity’s launch, and it’s not long before Romy realises they’re not all good changes

I went into The Loneliest Girl in the Universe expecting a cute romance story set in space, what I got however was so much more than that. I can’t go into too much detail around the plot or the character development for fear of revealing any spoilers and ruining the twists throughout this book, but it was amazing. The Loneliest Girl in the Universe has a slow moving plot but it all added to the atmosphere of the story.

“I became the pride of The Infinity: the first child born in space, the start of a new generation., the emblem of all that the mission would achieve.
In the end, all I am is a symbol of its failure.”

Romy has known no other life apart from the one aboard The Infinity, has had no actual contact with anyone since her parents died. She is incredibly smart, trained by her mother and father in everything she needs to know to run The Infinity, and incredibly responsible as well but there are some areas of life where she is still naive.

This book focuses very much on Romy, and I really loved her development throughout. She wasn’t a perfect character but she felt very real. After her parents died she took charge of The Infinity, determined to fulfil the mission her parents started and reach Earth II, but she still has her fears and her doubts. She suffers from anxiety and is very much haunted by an event in her past that led to her parent’s deaths.

“I got so lucky. In what could have been the worst, most isolating time of my life, I’ve been given the best friendship. It’s like it was fate, like J was sent to guide me through the darkness to keep me sane.”

J is the first boy Romy has spoken to, the first person she has a connection with as they are both flying through space alone. Sometimes the feelings she has for him felt more like infatuation than a crush, but that fit with her character and the loneliness she’d had to live with for so long. After years alone it’s only natural to latch onto someone close by who shares similarities with you.

The more Romy and J email the more Romy opens up to him, and as a result the reader as well. Through the emails they share we discover more of her feelings, emotions, and thoughts; the deepest darkest secrets she’s never been able to share with anyone because no one’s been able to understand the situation she’s in until J. It was an interesting way to develop another side of Romy’s character and emphasise the situation she’s been in for so long.

“On good days, which don’t come often, I love my ship and everything it represents. I thrill at the thought of seeing Earth II. There are going to be so many things there that have never been seen by human eyes before. I’ll get to study the planet using priceless, brand-new equipment that’s just waiting to be unpacked.”

While this book is set in space we actually don’t get to see much of the universe outside of Romy’s life on The Infinity. Romy knows every inch of her spaceship, but there are still places left unexplored, rooms she fears to go near because of the memories they have attached to them. This combined created a private, closed off and almost claustrophobic setting which works really well with the story being told. The science is also well developed, enough information was revealed so that I didn’t feel lost in the technical explanations but it was never too much that it became info-dumping, ruining the pace of the story.

The Loneliest Girl in the Universe was a book I didn’t expect, but one I couldn’t put down. It was a quick read, I managed to get through it in a couple of hours, both because of the amount of pages and the way Lauren James wrote a story full of tension and twists that kept me hooked from the beginning to the end.

What did you think of The Loneliest Girl in the Universe? Was it a favourite of yours or could you just not get into the story? Let me know.

16 thoughts on “The Loneliest Girl in the Universe”