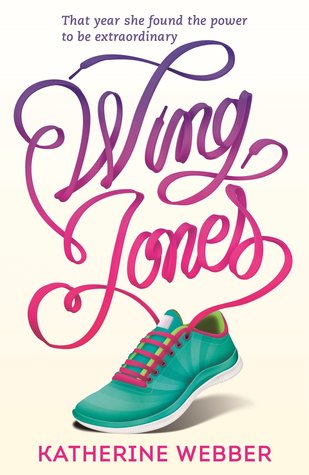 Jandy Nelson meets Friday Night Lights: a sweeping story about love and family from an exceptional new voice in YA. With a grandmother from China and another from Ghana, fifteen-year-old Wing Jones is often caught between worlds. But when tragedy strikes, Wing discovers a talent for running she never knew she had. Wing’s speed could bring her family everything it needs. It could also stop Wing getting the one thing she wants.

“How can a place feel so empty with four people in it? I breathe in my grandmothers more than hear them. Tonight they have disappeared into the shadows; they will sink into their small twin beds, deeper and deeper, until all that is left is an imprint of them and the lingering scent of flour and spice. Without Marcus there is no one in the house.”

Wing has always looked up to her older brother Marcus; he’s her idol and everything about his life seems perfect to an outsider who never seems to fit in anywhere like Wing. He’s popular, quarterback of the football team with scouts from universities looking at him, has a wonderful girlfriend, who he’s been in love with since eighth grade, and he fits in. Wing on the other hand is constantly on the outside, she has no friends and it seems like she doesn’t fit in anywhere.

Then comes the night that Marcus makes a stupid decision, and it puts Wing’s life in a tailspin. In the wake of the accident Wing is left with her mother and two grandmothers, trying to pick up the pieces and survive.

“The clouds have risen, out of my reach, but now I can see the stars and they wink down at me like they’re saying ‘You go, girl’ and I tilt my head back and smile up at them, and I hope that from way up there my smile looks like a bright shiny star winking back at them.”

To cope with the gap in her home where Marcus once was, with the cruel whispers at school that follow her around, with the worry over what will happen to her family as the bills pile up, Wing starts running at night with her lion and dragon, creatures who look over her who only she can see, her only company. Wing runs for her brother, her footsteps keeping beat with Marcus’s heart, and she has a talent for it, one that if she could only show people could bring her family out of the hole they have found themselves in.

Wing Jones is a story that revolves around Wing’s character development more than anything else. Wing has always looked up to her brother but as she runs and works to get better you start to realise she’s been living in her brothers shadow. As the story continues we see Wing grow into a different person. She still loves her brother and still looks up to him but she starts seeing him as a real person, someone who makes mistakes and who is far from perfect. Wing Jones was also a story all about family, and I loved reading about Wing’s.

“I’m like one of the Twelve Dancing Princesses from that old fairytale, where the twelve sisters go dancing in a magical world every night and dance so long and so hard that they wear out their shoes. Except I’m not a princess and I’m all on my own
And running is way better than dancing.”

Wing is mixed race, one side of her family is from China and the other from Ghana, but where her brother stands out Wing just doesn’t fit in. She has no friends other than Marcus and his friends, and she seems content to move though high school unnoticed. Until the accident and Wing’s life starts falling apart. Wing never intends to share her running with anyone, she runs the school track in the early hours of the morning and it’s more of a compulsion than anything else. To Wing running is like breathing, it’s something she needs to do and the thought of sharing it with people isn’t something she’s comfortable with.

Family is a big part of this story, and Wing’s family is a big part of her life. She lives with her mother and her two grandmothers. LaoLao and Granny Dee are two of my favourite characters in this story, they don’t get along with one another unless they’re banding together to torment Wing in that ways families do. After Marcus’s accident Wing’s family come together instead of drifting apart. They all play their part, be it going back to work like LaoLao to help pay the bills or sitting with Marcus in the hospital day in and day out like Granny Dee.

Marcus is also a big part of this story, despite not being present for most of it. After the accident everyone seems to turn on him, blaming him for what happened and in some cases taking that scorn out on Wing as she’s the one left at school. Wing has always seen Marcus as perfect, but after the accident she starts seeing him in a different light. The conflicting emotions Wing felt about her brother where really well written; she loves him but at times hates him for what he did, she is grateful he survived but feels guilty for feeling that way when others died in the accident. In the end I think the relationship between Wing and her brother becomes more level, instead of him being someone she looks so far up to they’re on more equal ground.

“Another wish, a secret one, flutters by, and it has Aaron’s name on it. I watch it for a moment, fluttering, floating, and then I grab it tight and crush it before anyone else can see it. I can feel the remnants of the mothy wish wings on my skin.”

There was a romance in this book for Wing, and what I loved about it was that it didn’t take away from her individual character development or her characters goals. Wing has had a crush on Aaron, her brothers best friend, for ages and she is happy being his friend as well but she can’t help wanting more. Aaron is the first person who discovers Wing running alone at night and he’s the one who helps train her, helps her get better with the hopes of maybe, one day, showing her talent to the world. Aaron isn’t a love interest who holds Wing back, but one content to let her move forwards even if it’s without him.

Wing Jones is an incredible book, contemporary with small hints of magical realism I quickly fell in love with Wing’s character and loved reading her journey as the story unfolded. Reading about Wing’s love of running, and about the freedom she found through it, made me want to start running myself.

What did you think of Wing Jones? Was it a favourite of yours or could you just not get into the story? Let me know.