Top Ten Tuesday is a weekly feature hosted by The Broke and the Bookish. Each week there is a new topic for bloggers to choose and list their top ten. This week’s theme is Top Ten Series I’ve Been Meaning to Start but Haven’t Yet.

No matter how hard I try, or how many books I read, I can never seem to make a dent in my TBR list. So it’s no surprise there are tons of series I’ve yet to get around to, even more than the ten I featured for this week’s theme. Hopefully, at the very least, I’ll be able to start these series soon because they’re all ones I want to read before this year is up. 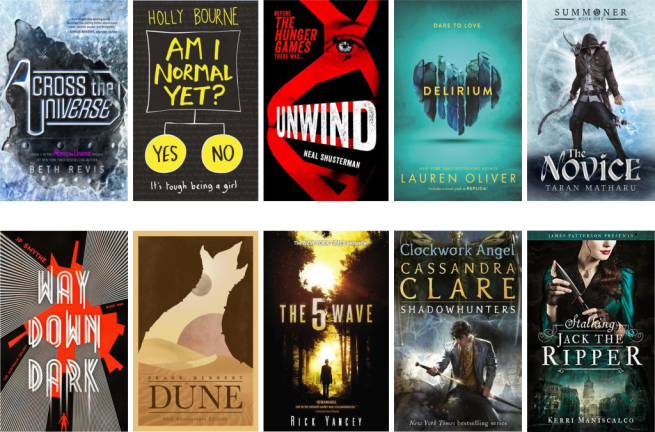 Across the Universe by Beth Revis

I haven’t really heard much about this series, at least not in terms of reviews, so I really have no idea whether it’s widely regarded as a good trilogy or a bad one. However I need to add more sci-fi books to my to-read list, and the blurb for the first book was certainly interesting enough to grab my attention.

The Spinster Club by Holly Bourne

This was a series I picked up in preparation for YALC last year, however unlike Across the Universe this is a series I’ve heard plenty of beyond amazing things about. Recently I’ve been in a little bit of a contemporary slump but hopefully I’ll be coming out of that soon and I can get started on this trilogy soon.

Before Scythe was released I wasn’t aware of what books Neal Shusterman was known for, and though I’d seen the Unwind Dystology around I never really check it out. That was apparently a big mistake on my part because the second I read the blurb for the first book I knew I just had to read the series.

I’ve seen Delirium loads of times in my local Waterstones, but was never really interested enough to pick it up and check out the blurb. Another mistake on my part because since blogging I’ve heard some amazing things about Lauren Oliver and I loved her latest release, Replica, so of course I had to add her other books to my to-read list.

While at YALC last year I sat in one of Taran Matharu’s panels, and after hearing him describe his series I was hooked and went, there and then, to buy his first and second book. I still haven’t read them, or the third which has now been released but as Matharu is going to be at YALC again this year I have until the end of July to get through the trilogy.

The Australia Trilogy by James Smythe

This was another series I picked up at YALC, hooked just from the way the author described his book. The Australia trilogy is another sci-fi series, again sorely needed on my to-read list, and although I’m not sure whether James Smythe is going to be at YALC again this year I’d like to have finished his series by then as well.

The 5th Wave by Rick Yancey

This series was recommended to me by one of my best friends after she read the first book and fell in love with the story. This is someone who doesn’t normally recommend books, in fact the last book she recommended was Red Rising, so I know The 5th Wave is likely going to be amazing.

The Infernal Devices by Cassandra Clare

While I am slowly making my way through Cassandra Clare’s Shadowhunter books, The Infernal Devices has been a series on my to-read list since before the first book in the trilogy was even released. So a very long time now. I’ve heard nothing but great things about The Infernal Devices books so I really can’t wait to get started on them.

Sometimes when you read a blurb or see a review you find yourself wondering whether a book has been written solely with you in mind; that’s how well it fits your reading preferences. Stalking Jack the Ripper is that book for me. I need to get around to this series because it has so much I love but rarely see in books.

So what do you think? Did you take part in this week’s Top Ten Tuesday, if so let me know what some of the series you’ve been meaning to start but haven’t yet are.

90 thoughts on “Top Ten Tuesday: Top Ten Series I’ve Been Meaning to Start but Haven’t Yet”