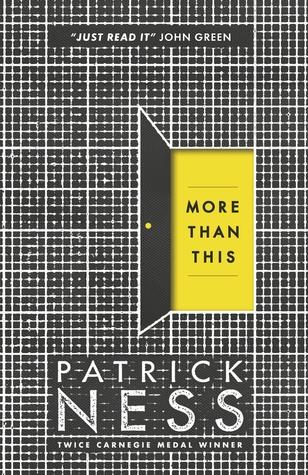 Title: More Than This

A boy drowns, desperate and alone in his final moments. He dies.

Then he wakes, naked, bruised and thirsty, but alive.

How can this be? And what is this strange, deserted place?

As he struggles to understand what is happening, the boy dares to hope. Might this not be the end? Might there be more to this life, or perhaps this afterlife.

Ever since reading The Rest of Us Just Live Here at the end of last year I’ve been meaning to get around to more of Patrick Ness’s books. I’ve heard amazing thing after amazing thing about the Chaos Walking series, but after hearing high praise for this book as well I decided to start with More Than This. The blurb gave nothing away, and I don’t want to give much away in this review either because this is a book that is so much better to go into blind.

Seth dies at the beginning of More Than This, he’s struggling to survive but the waves are too powerful. He dislocates his shoulder crashing against the rocks before knocking his head and blacking out. But then he wakes up again; naked and alone, covered in strange bandages and small cuts. At first he isn’t sure where he is but he soon recognizes the house he woke up in front of. Seth has no clue why he ended up here, the house that used to be his home, but the more he explores and the more he discovers the more convinced he is that he’s ended up in hell.

“Now that I know there’s more? I want to have more. If there really is more to life, I want to live all of it. And why shouldn’t all of us? Don’t we deserve that?”

As he explores this new world, alone, Seth is forced to come to terms with what he did and what happened that led him to his death. The writing of this book was powerful. Seth is forced to faced the events of his life and we discovered alongside him what it was that led him down the path he walked. We see the events leading up to his death, his interactions with his friends and his brother and his parents which forced him to believe there was nothing left for him.

The story is attention-grabbing; the blurb doesn’t give anything away and I don’t want to give anything away in this review either because the whole joy is discovering everything as Seth did. As I was reading I came up with hundreds of theories as to what had happened to Seth and where the story was going; an alternate world, alien invasion, possibly the end of the world and other various post apocalyptic scenarios. I was wrong about every one of them and honestly I couldn’t have predicted were this book was going.

“He wanted something, he realizes now. Wanted an answer other than the ones he’d been given. Wanted to find out this whole world had some purpose, some particularpurpose. For him.”

Seth is a quiet character, he lived his life under the radar and didn’t have a large or outgoing personality. He felt overlooked by his parents and possibly by his friends as well. Things weren’t good for Seth before the events that led to his death but the more time he spends in this new world the more he thinks about everything that happened; with his parents, with his friends, and with the people closest to him and starts to see things in a different light.

More Than This is all about Seth’s journey. He sees his past through dreams that are so powerful they feel real and it allows him another look at what happened in his life that made him believe ending it was his only option.

His mother shakes her head. “Everyone thinks they know what’s best. Everyone.”
And then a voice behind him says, “Sometimes you need to find out that you don’t, though.”

In some ways I felt Seth was a selfish character, although maybe not in the way you’d expect. He made a mistake when he was a young child and it is something he bears the weight of on his shoulders. He refuses to believe there is another option, another way to look at the situation and what happened, he doesn’t understand that everyone deals with their own pain in different ways.

None of the characters we meet, both in Seth’s dreams and outside of them, are without their faults. They are all struggling to live their lives, making the best of what comes their way, and yes they make mistakes. In the case of Seth’s parents and his friend Gudmund they made terrible mistakes, but they keep going because they have to believe there is something better out there.

“He’s seeing the actual Milky Way streaked across the sky. The whole of his entire galaxy, right there in front of him. Billions and billions of stars. Billions and billions of worlds. All of them, all of those seemingly endless possibilities, not fictional, but real, out there, existing, right now. There is so much more out there than just the world he knows, so much more than his tiny Washington town, so much more than even London. Or England. Or hell, for that matter.”

The world that Seth finds himself in after his ‘death’ is abandoned. There is no one else around and it becomes a place that forces him to relive the worst times of his life. It’s very dark and a little depressing, it’s almost as if the world has been abandoned for years. There are no other people around, the shops and houses are empty, all the food is uneatable, and half of the landscape Seth can see has been burnt to nothing. Everything Seth discovers leads us to believe it’s a post apocalyptic nightmare he’s stumbled into. A lot of his journey includes discovering the new world around him; why he ended up in a place where humanity has all but disappeared, a place which could be hell or a limbo before Seth’s real afterlife.

This feels like a short review compared to what I normally post but it’s hard to describe the book without giving too much of the plot or character development away. Part of the joy of reading this book for me was discovering everything Ness had written and every place the story led me.

I really loved the first Patrick Ness book I read but I thought More Than This was so much better than The Rest of Us Just Live Here. It was a brilliant read and despite being a little confused about where the story would go in the very beginning I couldn’t help but get sucked in. I understand why everyone loves Patrick Ness’s writing so much and I cannot wait to get to the rest of his books now.

What did you think of More Than This? Was it a favourite of yours or could you just not get into the story? Let me know.

54 thoughts on “More Than This”