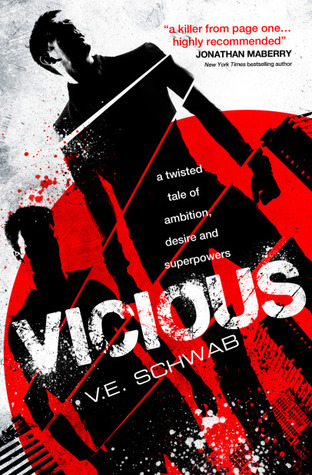 A masterful tale of ambition, jealousy, desire, and superpowers. Victor and Eli started out as college roommates—brilliant, arrogant, lonely boys who recognized the same sharpness and ambition in each other. In their senior year, a shared research interest in adrenaline, near-death experiences, and seemingly supernatural events reveals an intriguing possibility: that under the right conditions, someone could develop extraordinary abilities. But when their thesis moves from the academic to the experimental, things go horribly wrong.

Ten years later, Victor breaks out of prison, determined to catch up to his old friend (now foe), aided by a young girl whose reserved nature obscures a stunning ability. Meanwhile, Eli is on a mission to eradicate every other super-powered person that he can find—aside from his sidekick, an enigmatic woman with an unbreakable will. Armed with terrible power on both sides, driven by the memory of betrayal and loss, the arch-nemeses have set a course for revenge—but who will be left alive at the end?

In Vicious, V. E. Schwab brings to life a gritty comic-book-style world in vivid prose: a world where gaining superpowers doesn’t automatically lead to heroism, and a time when allegiances are called into question.

“Plenty of humans were monstrous, and plenty of monsters knew how to play at being human.”

After reading and loving all of V.E. Schwab’s other books Vicious went straight onto my to-read list, purely based on the author herself. It took me a while to get around to it but honestly it was worth the wait. I had high expectations for Vicious and it more than lived up to them. V.E. Schwab has created a group of characters who’s motivations may not be black and white, but who are all so powerfully written that you can understand what drives them to the lengths they go in this story.

Ten years ago Eli and Victor were roommates and best friends, drawn together like magnets, each seeing something in the other, cunning, ambition, they recognized in themselves. But when Eli decides to write his thesis on EO’s, ExtraOrdinaries, people with strange powers and what causes them, it changes everything in ways both Eli and Victor don’t then realize. When Eli makes the connection between EO’s and near death experiences Victor is the one who suggests they experiment with the theory, and become EO’s themselves.

“There are no good men in this game,” said Mitch.
But Sydney didn’t care about good. She wasn’t sure she believed in it. “I’m not afraid of Victor.”
“I know.” He sounded sad when he said it.

Ten years later Victor has escaped from prison and is determined to hunt Eli down, determined to make him suffer the way Victor has. Together with Mitch his prison cell mate, and Sydney, another EO, a girl with extraordinary powers, Victor slowly puts the pieces of his plan into place. Meanwhile Eli hunts down and kills every EO he can find, believing them to be an abomination and himself on a mission from God.

Vicious jumps through time; we see both the start of their journey ten years ago to become EO’s and what happened which drove them apart, as well as what they are both moving towards in the present day. We also get glimpses into the pasts of the other characters; Sydney, Serena, and Mitch. The story is carefully woven so we can understand what events unfolded in each of their pasts which brought them to the present day and the showdown between Victor and Eli, with Sydney and Mitch on one side and Serena on the other.

“Imagine a story, not of good against evil, but of need against need against need, where everyone is at cross-purposes and everyone is to blame.” The whole time I was reading Vicious I thought of this quote. I think it describes, a lot better than I ever could, what this book is actually about. Neither Victor or Eli could be described as the good guys, but then again neither could they really be described as the bad guys, though they both do horrible things in the name of reaching their goal. Vicious is a book full of grey characters; everyone has their own motivations driving them but at the same time they have been developed to allow us to see their flaws and faults as well. We see their humanity which makes is a little easier to understand, even in just a small way, where they’re coming from.

“Victor Vale was not a fucking sidekick.”

Victor, ten years ago, seemed to be more of a shadow to Eli’s bright light. He seemed to resent Eli at times and it only becomes worse when Eli successfully came back as an EO after his first NDE and Victor didn’t. The ten years he spent in prison gave Victor a lot of time to master his EO ability, and a lot of time to plan his revenge as well. He has become a hard person, a lot harder than he ever was, but in the end he still cares about people; about Sydney who he finds injured on the side of the road, about Mitch, and maybe even a little about Eli as well.

“You aren’t some avenging angel, Eli,” he said. “You’re not blessed, or divine, or burdened. You’re a science experiment.”

Eli was always the more reluctant of the two to experiment with the near death experiences they did. He tries to pull Victor away when he feels he’s getting out of control but after coming back to life Eli changes. He feels like something is missing, he fears he lost part of his soul and his belief in God is what starts to drive him. He falls deeper into his religion like it’s a security blanket and starts doing what he does to right what he did wrong, bringing the EO’s out from the shadows with his thesis. Eli is wholehearted in his belief that EO’s are unnatural.

Even though they are only really together through their flashbacks I loved the relationship between Eli and Victor. In a normal world, where the sides are divided into good and bad, you would think with the powers they have that Eli is the good guy, the hero, and Victor the bad guy, the villain. However it doesn’t work like that. Both characters are led by their own decisions, they have their own goals and both of them do horrible things in the name of them.

The secondary characters were just as amazing and well-developed. Sydney, who is only twelve and who finds herself hunted down by her own sister because of her ability. Mitch, who is a lot more than he seems and who has stood firm by Victor’s side even before the two escaped from prison. Serena, who uses her own gift for and against Eli. Each of them had their pasts fleshed out and their own motivations with drew them to either Victor’s or Eli’s side in this final showdown between the two.

“If he’d had to judge based on the two of them, then ExtraOrdinaries were damaged, to say the least. But these words people threw around – humans, monsters, heroes, villains – to Victor it was all just a matter of semantics.”

I will be the first to tell people that I am not scientifically minded; so there is a fair bit of the explanation behind the EO’s and their abilities which went over my head. However, for the most part, I enjoyed seeing how the process worked; through Eli’s thesis, his and Victor’s near death experiences, and through the other EO’s we meet through the story. What I really liked was how it wasn’t just the NDE that counted but also who the person is and what their last thoughts were as they died which shaped what ability they came back with. The world itself felt like a mixture of Sin City and Captain America: Civil War; it’s dark, it’s gritty, it’s grey verses grey in a battle where we’re not completely sure which side we should be rooting for.

Vicious is darker than I thought it would be, and complex in more ways than I expected. So much of this story was character driven but I really enjoyed that aspect as I felt it gave me much more of an insight into both Victor and Eli, and it allowed me to see how the actions they took ten years ago led them down the path they’re on in the present day.

What did you think of Vicious? Was it a favourite of yours or could you just not get into the story? Let me know.