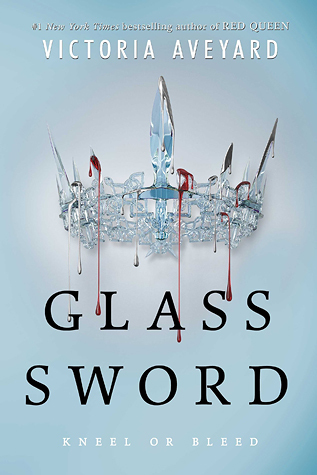 Mare Barrow’s blood is red – the colour of common folk – but her Silver ability, the power to control lightning, has turned her into a weapon that the royal court tries to control.

The crown calls her an impossibility, a fake, but as she makes her escape from Maven, the prince – the friend – who betrayed her, Mare uncovers something startling: she is not the only one of her kind.

Pursued by Maven, now a vindictive king, Mare sets out to find and recruit other Red and Silver fighters to join in the struggle against her oppressors.

But Mare finds herself on a deadly path, at risk of becoming exactly the kind of monster she is trying to defeat.

Will she shatter under the weight of the lives that are the cost of rebellion? Or have treachery and betrayal hardened her forever?

“Mare of the Stilts died the day she fell onto a lightning shield. Mareena, the lost Silver princess, died in the Bowl of Bones. And I don’t know what new person opened her eyes on the Undertrain. I only know what she has been and what she has lost, and the weight of it is almost crushing.”

I wanted to enjoy this book, I really did. It had a lot of good reviews and a lot of people were really excited for it, but maybe this series just isn’t for me. There are a lot of dystopian books on the shelves now and for me to enjoy a book, for it to really stand out, it needs to have something unique. In my mind the Red Queen series doesn’t, the first book read like a generic dystopian novel and it didn’t improve with the second instalment in the series.

Glass Sword picks up immediately after Red Queen ended, with Cal and Mare fleeing the capital after Maven’s betrayal, helped by the Scarlet Guard. They need to keep moving, Maven knows all their secrets and he won’t hesitate to use that knowledge to hunt them down. They travel to Tuck, a small island which is supposedly safe from the Silvers, however with her dangerous powers Mare is a threat to the Reds. When the Colonel takes Cal prisoner, fearful of his abilities, Mare is forced to play another role but this time for the Reds.

With the list Julian gave her burning a hole in the back of her mind, a list of Reds with powers like Mare and her brother Shade, Mare knows she needs to find them and save them before Maven tracks them down. But the Colonel refuses to let her. There are more important things the Scarlet Guard needs to tackle first; like the fact that Maven has reduced the enlistment age down to fifteen, meaning a legion of fifteen to seventeen year old Reds are marching to their deaths in the front line of the war. However Mare refuses to wait, refuses to let Maven possibly track down and kill the newbloods while she does nothing.

“He’s hunting newbloods not to protect his throne but to hurt you. To find you. To make you come back to him.” His fist clenches on his thigh. “Maven wants you more than anything else on this earth.”
Would that Maven were here now, so I could rip out his horrible, haunting eyes. “Well, he can’t have me.” I realize the consequences of this, and so does Cal.
“Not even if it stops the killing? Not for the newbloods?”
Tears bite my eyes. “I won’t go back. For anyone.”

With Kilorn’s help she breaks Cal out of his cell and, together with Shade and Farley, they leave Tuck to track down the names on the list and keep them safe from Maven. However Maven isn’t going to stand back and let them build an army of newbloods. He too is tracking them down, killing them to cement his place on the throne. With a world of Silvers at his back he has the resources to not only take out any newbloods he can find before Mare can reach them but also to hunt down Mare and Cal, offering awards and making them the most wanted people in the country.

Mare has changed a lot since the events of Red Queen, and also since Maven’s betrayal. She finally realises what Julian meant when he told her that anyone can betray anyone and it turns her against some of the people who are supposed to be close to her. She closes herself off from everyone but Cal. She becomes colder, more ruthless, and definitely more powerful but there is also a darkness in her and her actions which I think would be interesting if we saw more of it in the next books.

I wasn’t too keen on Mare’s character in the first book, and for most of Glass Crown she didn’t really improve. She seems to hold herself back from everyone around her, her family, her best friend, even the other newbloods who should be her people. Instead she cuts herself off and holds herself apart from them. While it’s understandable that she’s been effected by what happened with Maven her actions didn’t really endear her to me and I think the way she was in Glass Crown is a hard thing for an author to portray in a way that still makes the character likeable and sympathetic. It was done well with Katniss in The Hunger Games because although she was standoffish she had Peeta who endeared her to the people, and she stood by her friends and her family. Mare on the other hand only seems to trust Cal, who is no more trusted by the newbloods than she is, she pushes everyone else away.

He leans forward slightly, lips pulling back against his even, white teeth. It’s so aggressive and animalistic I expect to see fangs. “I am your rightful king, Silver-born for centuries,” he replies, seething. “The only reason you’re still breathing is because I can’t burn the oxygen from this room.”

Cal on the other hand I liked a little more in this book. In Red Queen he was nothing more than the stereotypical crown prince the heroine always falls for. In Glass Crown however he has fallen from his throne and has been branded a murderer. He is on the run and the betrayal he faced from his brother has changed him. He seems more destructive and he cannot even stand to hear his brother’s name. Cal seems to push everything he remembers about Maven before to the back of his mind.

The relationship between Cal and Mare, while it may have seemed shattered at the beginning of this book, didn’t stay that way for long. Despite them both having different bloods, Red and Silver, and despite everything Maven did it’s not long before Mare is seeking out Cal and trusting him over her own family. Because of course, god forbid we have one book without a romantic subplot.

“Every single thing I did, you stood behind me,” I say. “If I’m turning into a monster, then so are you.”
“Love blinds.”

We met plenty of newbloods in this book, plenty of new characters who had their own gifts just as unique and powerful as Mare, and I would have loved it if we could have seen more of them. There was Ada, who could memorise everything she read or saw, Nanny, who could change shape into any person she chose, Gareth, who could manipulate gravity, Harrick, who could create illusions. Instead of seeing and learning more about them and their abilities they seemed to be pushed into the background and, most of them time, I forgot about them whenever they weren’t in a scene. Instead the book focuses mainly on Mare and Cal and pushes all the other secondary characters to the side.

As Mare and Cal travel around the country we see a lot more of it, but nothing seemed to stand out. The different towns and cities they went to to save the newbloods seemed to blur together, there was nothing unique that made them stand out. And while we met a lot of newbloods with some incredible amazing abilities, we discovered nothing more about them or what it was that is causing certain Reds to have these abilities. There are so many questions I have about this world and the backgrounds of not only the newbloods but also the Reds and Silvers that are going unanswered. I really hope to get these answer in the next book but to be honest I’m not really holding out much hope. In some ways it feels like the world-building and the cities themselves are just as generic as the plot itself is.

I did enjoy both Red Queen and Glass Sword; the stories themselves, while nothing special, were good it was the characters I wasn’t keen on. I’m not sure if the series will improve with the next book but, after reading the ending of Glass Sword I will be picking up the third in the series. The last quarter was fast-paced and it ended in a way that made me want to reach for the next book.

What did you think of Glass Sword? Was it a favourite of yours or could you just not get into the story? Let me know.