Kady, Ezra, Hanna, and Nik narrowly escaped with their lives from the attacks on Heimdall station and now find themselves crammed with 2,000 refugees on the container ship, Mao. With the jump station destroyed and their resources scarce, the only option is to return to Kerenza—but who knows what they’ll find seven months after the invasion?

Meanwhile, Kady’s cousin, Asha, survived the initial BeiTech assault and has joined Kerenza’s ragtag underground resistance. When Rhys – an old flame from Asha’s past – reappears on Kerenza, the two find themselves on opposite sides of the conflict.

With time running out, a final battle will be waged on land and in space, heroes will fall, and hearts will be broken.

END_OF_DOCUMENT_TOKEN_TO_BE_REPLACED 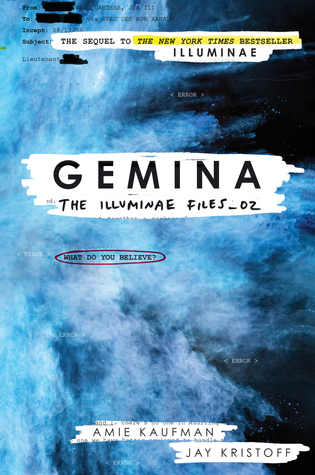 Hanna Donnelly is the station captain’s pampered daughter and Nik Malikov is the reluctant member of a notorious crime family. Together they struggle with the realities of life aboard the galaxy’s most boring space station, blissfully unaware that Kady Grant and the Hypatia are headed right toward Heimdall with news of the Kerenza invasion.

Picking up about five minutes after Illuminae ends, Gemina is the electrifying sequel to the hottest YA novel of 2015.

I received an ARC of this book free from Rock the Boat. It in no way affects my views on Gemina.