Sixteen-year-old Bri wants to be one of the greatest rappers of all time. Or at least make it out of her neighbourhood one day. As the daughter of an underground rap legend who died before he hit big, Bri’s got big shoes to fill. But now that her mom has unexpectedly lost her job, food banks and shutoff notices are as much a part of Bri’s life as beats and rhymes. With bills piling up and homelessness staring her family down, Bri no longer just wants to make it—she has to make it.

On the Come Up is Angie Thomas’s homage to hip-hop, the art that sparked her passion for storytelling and continues to inspire her to this day. It is the story of fighting for your dreams, even as the odds are stacked against you; of the struggle to become who you are and not who everyone expects you to be; and of the desperate realities of poor and working-class black families.

On the Come Up by Angie Thomas was published by Walker on February 7th 2019.

The Hate U Give was the book everyone was talking about, and it was an incredible story so it was all too easy to see where the hype was coming from and how well deserved it was. It also meant there were high expectations for Angie Thomas’s second novel, but in my opinion she more than delivered with On the Come Up. 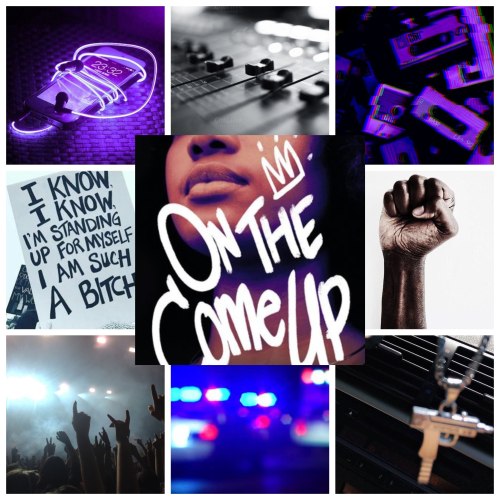 Bri’s dream is to be one of the greatest rappers of all time. She’s got rap in her blood thanks to her dad, who was a rap legend before he was gunned down, and the talent to back it up. When Bri wins her first underground rap battle, her introduction to that world, she has people’s attention but if she wants to keep it she needs to follow it up with a song everyone will remember. This is where Supreme, her dad’s old manager, swoops in.

But while Bri’s music dreams are soaring her mother loses her job, and they start struggling to pay the bills and still afford to eat. Making it as one of the rapping greats becomes even more important so Bri can help her family, but her song has made her out to be someone she’s not; a gangster with blood on her hands and a violent temper. Supreme wants to maintain that image but it’s not long before Bri’s music starts a movement and Bri can see how her words have been taken the wrong way to potentially disastrous consequences.

“Aunt Pooh said I only get one chance to let everybody and their momma know who I am.
So I take it.”

The blurb describes On the Come Up as ‘Angie Thomas’s homage to hip-hop, the art that sparked her passion for storytelling’ and it was easy to see that passion in her writing. Bri lives for rap and that really shines through in this book. It took me a while to really connect with Bri’s character; she’s outspoken, unapologetic, and abrasive, but she’s also loyal to her family, passionate, and in some ways scared and insecure. She’s someone who uses her abrasiveness to cover up for everything she’s unsure about, and in this book there’s a lot for her to be unsure about.

While On the Come Up doesn’t have the same message The Hate U Give does it still shows the struggle Bri lives with being black, being from the Garden, and being poor. The community is still reeling from what happened to Khalil and when Bri faces her own injustice at the hands of the security team who man the entrance to her school it sparks a movement, with Bri’s music fanning the flames.

“Jay really did leave me and Trey at our grandparents’ house. She couldn’t take care of us and her drug habit, too. That’s when I learned that when people die, they sometimes take the living with them.”

There was a very strong family dynamic in On the Come Up. Bri lives with her mother but years ago when Jay succumbed to drugs after Bri’s father’s death and abandoned her children at their grandparents it changed the way Bri saw her forever. Both Jay and Bri’s brother have tried to do things right, to stay away from the unsavoury parts of the Garden, but it seems like life is still determined to keep them down.

Bri’s extended family also play a large part in Bri’s story. Her Aunt Pooh is Bri’s manager at the very beginning but she doesn’t know how to be a manager. She’s involved with one of the gangs and deals drugs so she’s all too aware of how the messages in Bri’s song will be interpreted and she tries to warn Bri. Bri’s paternal grandparents are very involved in her life, and Bri finds herself torn between her mother and her grandmother, who struggles to see past Jay’s path and how she’s pulled herself up from rock bottom for her children.

“There’s only so much you can take being described as somebody you’re not.”

There was a romantic subplot, which I enjoyed because it didn’t steal the focus from Bri’s character development, her journey or her struggles, and I loved the dynamic between Bri and her two friends; Sonny and Malik. The three of them have been friends since they were children, they’ve stayed close but now their dynamic seems to be changing and Bri struggles to maintain her footing around them, especially Malik.

It took me a little while to get into On the Come Up, and there were some parts of this story that were hard to read. Again with this book Angie Thomas has written a hard-hitting story with a main character whose voice really shines through. You can’t really compare On the Come Up to The Hate U Give, or vice versa, they’re both incredible stories with messages that will stay with me for a long time after reading.

Have you read On the Come Up, or is it still on your TBR list?

Have you read Angie Thomas’s other release, which is your favourite?