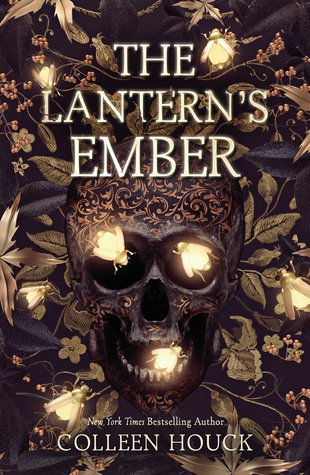 A bold and ghostly stand-alone from New York Times bestselling author Colleen Houck, with all the moodiness of Sleepy Hollow and all the romance her fans love.

Welcome to a world where nightmarish creatures reign supreme.

Five hundred years ago, Jack made a deal with the devil. It’s difficult for him to remember much about his mortal days. So, he focuses on fulfilling his sentence as a Lantern—one of the watchmen who guard the portals to the Otherworld, a realm crawling with every nightmarish creature imaginable. Jack has spent centuries jumping from town to town, ensuring that nary a mortal – or not-so-mortal – soul slips past him. That is, until he meets beautiful Ember O’Dare.

Seventeen, stubborn, and a natural-born witch, Ember feels a strong pull to the Otherworld. Undeterred by Jack’s warnings, she crosses into the forbidden plane with the help of a mysterious and debonair vampire—and the chase through a dazzling, dangerous world is on. Jack must do everything in his power to get Ember back where she belongs before both the earthly and unearthly worlds descend into chaos.

“Jack, the lantern, sat and watched as the carriage made its way to town. Just as it passed him, the curtain moved and a small, white face was lit by a moonbeam. It was a wide-eyed little girl, her brown hair curled in ringlets. She pressed her hands against the glass and her pink mouth opened in a circle as she stared right at him.”

For five hundred years Jack has been a lantern, guarding the crossroads which act as a portal into the Otherworldly. His current post is a quiet sleepy town, until a witch wind blows through the town and Ember O’Dare arrives. Jack knows he should report Ember to his boss, but instead he watches her grow from a distance. However Ember is just as curious about Jack as he is about her, and worse she’s curious about what lies on the other side of the portal he guards.

The Ember’s Lantern is a stand-alone story inspired by the Legend of Sleepy Hollow. It took me a little while to get into the story; it opens slowly as Jack and his boss investigate the witch wind, finding nothing, and then we see the years pass as Ember grows and learns her magic. There was also some info-dumping at the beginning as we learn more about Jack’s past as a lantern and the last three towns he’s guarded where a Witch Wind has blown.

“The persistent tug hadn’t left her, but it had settled somewhat. The feeling would lessen to a tolerable level when she was around Jack, but now that she was finally there, in the Otherworld, she felt right, centred, like she belonged. The great yawning world lay at her feet, and she wanted to open her arms and embrace the whole of it.”

Jack is determined to keep Ember away from the Otherworld, he knows the dangers that will be waiting for here there. But when a vampire from the Otherworld offers to take her back with him, and act as her guide, Ember doesn’t hesitate. Close on Ember’s trail Jack knows he needs to get the witch home before someone discovers her, but there are plenty of people with ulterior motives already seeking Ember; Jack’s boss, the Lord of the Underworld, and Dev who’s motives for Ember cannot be trusted.

Similarly to the ending of the last stand-alone book I read I felt like the ending to The Lantern’s Ember was rushed; there was so much happening in the last few chapters, and it was hard to keep up with it all when compared to the pace the rest of this book had set. The story also felt more like a paranormal romance than a fantasy. Maybe if it had been spaced out more there would have been time to develop the plot and the characters, but as it was I felt like the majority of The Lantern’s Ember was focusing on the developing romances.

“One doesn’t choose to become a lantern. Most of us are tricked into it.”

Jack has been a lantern for nearly five-hundred years, and he’s good at his job, following all the rules to the letter but one. Jack has a weakness for witches in the towns he guards, he doesn’t agree with the methods his boss has used in the past and instead takes a ‘watch and learn’ approach when he discovers Ember. Despite having lived so long Jack has spent most of it separated from humanity, he doesn’t understand people’s nature well and thinks Ember will be content to wait, to heed his warnings, when she is curious and the Otherworld is waiting for her.

“There’s something you need to learn about me,” Ember said, sauntering closer and poking him in the chest. “No one, not even a devilishly handsome, pumpkin-carrying lantern, tells me what to do.”

Ember is a character I really couldn’t connect with. I understand she wasn’t going to wait until Jack allowed her to see the Otherworld, when he decided it was safe, but there’s a difference between making your own decisions and blundering into danger unprepared. Ember was more the latter than the former. She’s also an example of the ‘not like anyone else’ trope; as a witch she doesn’t fit in with her village, and in the Otherworld she is more powerful than any other witch anyone has seen and her power is coveted by pretty much everyone she comes across.

The four main characters in this book were tropes; Ember was the powerful and perfect main character who everyone seemed to fall in love with, Jack is the brooding but honourable love interest, Finney is the boy in love with his best friend but doesn’t really stand a love chance, and Dev is the dangerous love interest. The only two characters who I feel were developed past their tropes were Jack and Finney. Dev I really couldn’t stand because some of his actions seemed to border on non-consensual; as a vampire feeding on people creates a connection between them, and he uses that multiple times on Ember with her seemingly unaware of what he’s trying to do.

“Ember,” he said, his voice husky.
She liked the way he said her name, especially at that very moment. “Yes, Jack?” she answered; her own words sounded throaty and thick and full of longing.
“This was a mistake.”

There’s a love square in this book and I am not a fan of that trope at all. If it had just been a love triangle between Jack, Finney and Ember I wouldn’t have minded so much because Jack and Finney respected one another. At their heart they each want what’s best for Ember; Jack believing that to be a human like Finney, and Finney knowing Ember would never be content with him. However you add Dev into the mix and it becomes the worst example of a love triangle with Jack and Dev each trying to prove their better than one another just to get Ember’s attention.

“It comforted him to see his ember’s glow in the pumpkin’s expression. The light warmed him, giving him hope that somehow, somewhere, there was a spark of freedom waiting for him, even if it was at the end of a very long, weary road.”

The legends mixed into the plot and that Colleen Houck has used as inspiration were mixed well into the plot. Jack’s past as a lantern was interesting to read about; he was there when the Roanoke Colony vanished, he witnessed the Salem witch trials, and was the ghost of Sleepy Hollow. It was the world building itself where this book fell down. While we learnt a lot about the history of the Otherworld, how the Lord of the Otherworld came to rile and what happened to cause all the witches to flee, we never got to see the mechanics of the place.

I’d never read a story inspired by The Legend of Sleepy Hollow before, but The Ember’s Lantern ended up being a letdown and I couldn’t say I had high hopes for it in the first place. There was potential, but it wasn’t developed well; the plot seemed to revolve more about the love square than anything else and some of the main characters were nothing more than tropes with names.

What did you think of The Lantern’s Ember? Was it a favourite of yours or could you just not get into the story? Let me know.

7 thoughts on “The Lantern’s Ember”