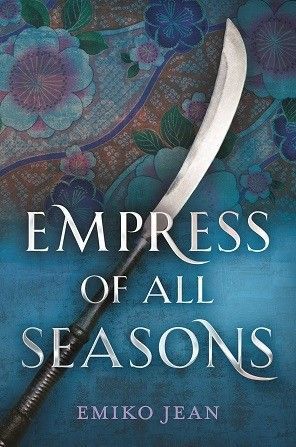 Title: Empress of All Seasons

In a palace of illusions, nothing is what it seems.

Each generation, a competition is held to find the next empress of Honoku. The rules are simple. Survive the palace’s enchanted seasonal rooms. Conquer Winter, Spring, Summer, and Fall. Marry the prince. All are eligible to compete—all except yōkai, supernatural monsters and spirits whom the human emperor is determined to enslave and destroy.

Mari has spent a lifetime training to become empress. Winning should be easy. And it would be, if she weren’t hiding a dangerous secret. Mari is a yōkai with the ability to transform into a terrifying monster. If discovered, her life will be forfeit. As she struggles to keep her true identity hidden, Mari’s fate collides with that of Taro, the prince who has no desire to inherit the imperial throne, and Akira, a half-human, half-yōkai outcast.

Torn between duty and love, loyalty and betrayal, vengeance and forgiveness, the choices of Mari, Taro, and Akira will decide the fate of Honoku in this beautifully written, edge-of-your-seat YA fantasy.

“The rules were simple: Survive the rooms. Conquer the seasons. Win the prince.”

For years Mari has been training to become empress, to conquer the seasons and marry the emperor only to flee with his riches on their wedding night as is the way with animal wives. Deemed as unattractive by her fellow animal wives the only way to prove her worth was for Mari’s mother to claim she would be the one to succeed and bring home a great prize. But Mari is a yōkai, not only is it forbidden for her to enter the contest but if she is discovered in Honoku she will be enslaved or even destroyed.

Empress of All Seasons wasn’t a fast-paced story, we open on Mari’s training and find her trapped in a room with an imperial solider she’s been commanded to kill; instead it takes the time to build up Mari’s situation, both an outsider among her clan and the risks she is taking as a yōkai preparing to take part in the competition to become empress. Mari has never fit in with the animal wives, but she still dutifully follows their plan for her despite knowing it could mean her death.

“We have been pushed around and forced into quiet rooms our whole lives. Nobody’s ever asked us what we wanted. The prize isn’t the prince. It’s the power.”

On her first night in Honoku Mari’s paths cross with Taro, the prince just as unwilling to be part of this competition as Mari is, and unbeknownst to her her friend from the mountains has followed her to the city to offer her whatever help he can. As Mari enters the rooms, battles seasons and the hundreds of other girls who are also competing for the prince, and as Akira becomes more involved in the rebellion it becomes obvious there is more at stake in this competition than just the position of empress.

While most of this story was slow paced, allowing the danger and risk to slowly build up before it all came to a head in the final few chapters, the ending was the opposite. For me it felt like this book ended halfway through the story and the rest of Mari’s journey was told through an epilogue-style overview. I almost think this story would have been better if it had been a duology, and we’d gotten a second book about what happened next once the first battle was over.

Mari is an outsider among her people; she doesn’t really have any close friends bar Akira who she cannot even be friends with, but ever since she was a child her duty has been to compete to marry the emperor and she has followed that duty wholeheartedly. Living in the mountains, safe from what the emperor has done to the yōkai in Honoku, Mari is sheltered. She’s been well trained, she’s strong enough and clever enough to win the competition, but when she sees how another yōkai are suffering she can’t turn a blind eye.

“Someday it would all be Taro’s: the riches, the command of the land, the power. I don’t want it. I don’t want any of it. I especially do not wish to be a prize in some stupid competition.”

Taro doesn’t want to be emperor, all he wants is to be left in peace to continue inventing things. After his last invention was misused by his father, used to enslave the yōkai, Taro is hesitant about sharing his mind with her father. Immediately when they meet, as Taro is preparing to escape before the competition even begins, he is enchanted by Mari. She doesn’t realise who he is and that’s a novelty, and Taro starts falling for her, rooting for her, as the competition begins.

The relationship between Mari and Taro did feel a little like insta-love. It was framed, especially towards the end with everything happening in the last few chapters, as an epic romance but as this was a standalone book I think it was hard to develop and convey that in a short space of time. In the end what we got was insta-one and a connection between the two when they first meet. Together with Taro Mari abandons the plans the animal wives had for her, and instead sees a better future they can create for the yōkai in Honoku.

“In his heart he promised Mari that everything would be all right. He would make sure of it. One last look up at the canopy, at the whisper of green trees. You must take this leap. The jump always makes the fall worth it.”

Akira was my favourite character. He was Mari’s secret friend in the mountains, he knows all her secrets and when he discovers she is to head to Honoku for the contest to begin he offers to help her escape. Akira is in love with Mari and while that would normally mean a love triangle it didn’t in Empress of All Seasons; Mari didn’t lie about her feelings or lead Akira on, she couldn’t return what Akira felt but she still loves her friend.

It’s for Mari that Akira heads to the Imperial City. Having fled with his parents from a village who despise yōkai Akira is sheltered like Mari, but he doesn’t have the strength or training she does. He joins the rebellion in order to get training from the weapons master, all so he can become someone strong enough to can help Mari if she needs it.

“A bar, made from the trunk of a thousand-year-old oak tree, rested across, blocking what was inside from getting out. A relief of a mountain covered in gleaming snow was carved into the wood.
The Winter Room. As with each of the Seasonal Rooms, it could be used for pleasure, or for pain.”

Although this was a stand-alone book, and I mentioned I wasn’t a fan of the development of the romance, I thought the development of the world was really well written. At the very beginning there is a little bit of exposition, letting us know firsthand only what we needed to about yōkai in order to understand Mari’s situation, but the rest was woven into the story. I loved the short chapters of myths that have built up the world Emilio Jean has created, and I think the idea of a palace with four rooms for each of the seasons is a really interesting one. I just wish we’d seen as much of the behind the scenes, how the seasons were maintained and created in the palace, as we saw of the insides the rooms as Mari battles the seasons.

Empress of All Seasons is a solid standalone fantasy I really enjoyed. The majority of the plot is well-paced and developed, it was really just the ending that let it down, and while I wasn’t a massive fan of the insta-love between Mari and Taro, Mari’s individual character development was wonderful to read especially in the finale of her story.

What did you think of Empress of All Seasons? Was it a favourite of yours or could you just not get into the story? Let me know.

17 thoughts on “Empress of All Seasons”