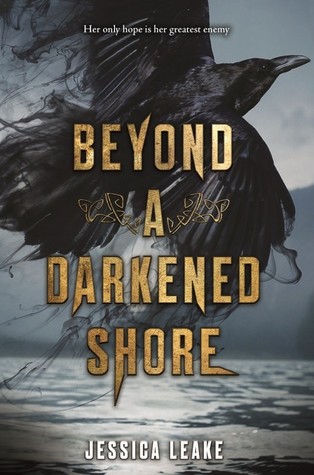 Title: Beyond a Darkened Shore

The ancient land of Éirinn is mired in war. Ciara, Princess of Mide, has never known a time when Éirinn’s kingdoms were not battling for power, or Northmen were not plundering their shores.

The people of Mide have thankfully always been safe because of Ciara’s unearthly ability to control her enemies’ minds and actions. But lately, a mysterious crow has been appearing to Ciara, whispering warnings of an even darker threat. Although her clansmen dismiss her visions as pagan nonsense, Ciara fears this coming evil will destroy not just Éirinn, but the entire world.

Then the crow leads Ciara to Leif, a young Northman leader. Leif should be Ciara’s enemy, but when Ciara discovers that he, too, shares her prophetic visions, she knows he’s something more. Leif is mounting an impressive army, and with Ciara’s strength in battle the two might have a chance to save their world.

With evil rising around them, they’ll do what it takes to defend the land they love…even if it means making the greatest sacrifice of all.

“Were we to fight the gods themselves?”

Ciara has never known a time when her people weren’t at war, fighting back against the Northmen who raid their churches and battle for power. The people of Mide have a weapon in Ciara though, her ability allows her to take control of people’s minds and use her enemies to fight for her instead of against her. Until Ciara comes face to face with a Northman she can’t control, and the crow Ciara has always seen in her dreams tells her to spare his life.

As much as I love mythology inspired stories it’s rare I pick up a book that doesn’t focus on Greek mythology, likely because there are fewer stories out there that focus on other countries and cultures myths. Jessica Leake uses Celtic and Nordic mythology as a backdrop for Ciara and Leif’s story, and this book made me want so much more. Beyond a Darkened Shore was a stand-alone and I felt it was perfectly paced; the plot was steady so it didn’t feel lagging in places and the climax wasn’t crammed in to the end few pages

“There is greatness in you, Ciara of Mide, beyond even what you have accomplished so far. It matters little where your power comes from.”

Hoping to learn more from the Northman she can’t control Ciara takes Leif as her prisoner, but Leif is on a mission bigger than raiding the people of Mide for their land and treasures. There is an ancient evil waking, and Ciara and Leif are the only two people who can defeat it. Ciara was born into her powers and Leif sacrificed everything for his, the two are enemies but if they want to save the world and everyone they love they need to work together, no matter what it costs them to do so.

Beyond a Darkened Shore was a dark story, neither Ciara or Lief shies away from taking lives but they soon realise there’s something bigger to fight than each other. At the beginning of this book the battle between Ciara’s people and Leif’s set the tone, and as the story continues there are more battles the two need to face. As the risks become steeper the story seems to become more grey, with both Ciara and Leif having to sacrifice things they never dreamed of for their chance at victory.

“Demon, they called me in their minds. Changeling. Cursed. And every time I took hold of someone’s mind, I wondered if perhaps they were right.”

Ciara is seen as a monster by her people. As much as her power gives them a better chance at victory when the Northmen arrive on their shores, her ability to control peoples’ minds has left her a pariah. Still she’s willing to do anything for Mide, especially for her younger sisters, and when she sees visions of what the world will become if she doesn’t work with Leif it’s the visions of her sisters’ deaths in particular which motivate her.

As the story continues Ciara goes through some incredible development. Away from her father and her people who hate and fear her Ciara becomes free to master her powers. The more she learns the more powerful Ciara becomes, she’s a force to be reckoned with but it’s when she’s faced with some of the choices she has to make, the sacrifices she has to take advantage of, it’s her inner strength and her determination to do what needed to be done for the greater good that I admired more.

“The turmoil and mental anguish I’d felt toward him was unfounded. Leif was a Northman, an outsider, but he accepted me more than any of my own clan ever had.”

Leif is the only person Ciara has met who is immune to her powers, and he has gifts of his own which he gave everything for. Like Ciara Leif is driven by his love of his family, he knows a lot more about what’s at stake than Ciara does and despite not being born with his abilities he has a greater control over them, but he knows he needs Ciara’s help if he’s going to succeed. Leif is loyal to his family and his people, but the more he’s with Ciara the more he becomes loyal to her as well.

“This is my fight, Leif.”
He grinned. “I appreciate your efforts to emasculate me so early in our relationship, but you know I cannot resist a battle.”

Both Ciara and Leif have been fighting on different sides of a battle waging between their people for years. Neither of them trust one another when they first meet but Leif knows he need a Ciara’s help, her power, if his mission is going to succeed. He trusts in the visions he’s seen and the crow which led him to a Ciara’s shores. Ciara is not so accepting, but she is driven by the vision of her sisters deaths, the vision which showed the end of Mide and the end of the world.

At first neither Ciara or Leif work together, too used to doing things their own way, but the more time they spend together, battling against gods and giants and all manner of creatures Ciara thought nothing more than myth, the more they become a real team.

“The gods of the old world have stood aside, obeyed the ancient laws giving free will to men, and now, when our realm and yours hang in the balance, we are still bound by our covenants. The laws are clear: we can act only through man. And in all the world, there are only two strong enough to defeat them. One born for it, the other through great sacrifice.“

Beyond a Darkened Shore is set in Ireland but as Ciara and Leif prepare to fight for their people and their world the story travels from the outskirts, where Ciara’s people have made their homes, to Dublin, where the king Mide have been fighting against for years rules, and to the North, where Leif’s people come from. The settings were all well developed but what I loved the most about this book was the mythology; the Celtic gods and legends Ciara once worshipped but doesn’t believe are anything more than stories, and the Nordic gods and monsters Leif knows all too well and fears for very good reasons.

Beyond a Darkened Shore is a solid standalone; Ciara’s individual character development really stands out, the story was brilliantly paced, and the world building was detailed and immersive. Before picking up Beyond a Darkened Shore I didn’t know much about Nordic mythology, and I don’t think I’d ever read a book that featured Celtic mythology, but this story left me wanting more.

What did you think of Beyond a Darkened Shore? Was it a favourite of yours or could you just not get into the story? Let me know.

8 thoughts on “Beyond a Darkened Shore”