Top Ten Tuesday is a weekly feature hosted by That Artsy Reader Girl. Each week there is a new topic for bloggers to choose and list their top ten. This week’s theme is a villains freebie, so I picked Top Ten Villains I Loved More Than or as Much as the Heroes.

Every story needs a good villain, and they need to be as well written as the heroes they go toe-to-toe with. As much as I always root for the heroes of every book I read there are times when I can’t help but be more fascinated with the villain, so for this week’s Top Ten Tuesday themed free pick I decided to focus on those villains; characters I loved the most and who I’d love to learn more about. 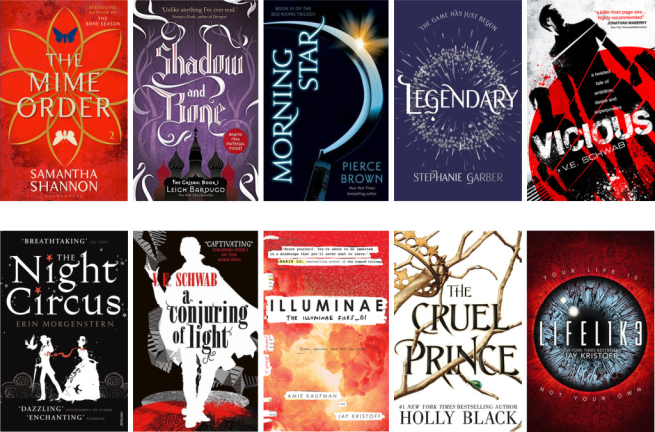 Jaxon isn’t really the main villain of the series, but he’s still an enemy you’d want to keep an eye on. He has a dark past and when it comes down to it he’s just learnt to do whatever he has to to survive, which means siding with whoever he thinks will end up on top once the final battle’s been fought.

The Darkling
Shadow and Bone by Leigh Bardugo

Is there anyone out there who didn’t love the Darkling more than every other character in The Grisha trilogy? He’s such an interesting character and this is considering the fact that we didn’t get a massive insight into his past, which considering what we did learn about him would be extensive.

Cassius is more of a redeemed anti hero considering where his path goes in Morning Star, but his development in that last book was incredible, though heartbreaking. I’ve read Iron Gold, so I know where his story goes in the fourth book of the Red Rising series, but until I see proof I don’t buy it.

Despite only watching from the sidelines as Tella played the game Jacks was a major player in Legendary. Even with the little I know, which is the bare minimum, I feel like Jacks will be a favourite character of mine, the small insights we got have definitely made him the most intriguing in this series.

Something about the way Vicious is told means I feel there isn’t a specific hero or villain to the story. Eli casts himself as the ‘hero’ and Victor the ‘villain’ but reading from Victor’s POV gives us another side to their story, and casts them both as villains. Either way what makes this book is the bond between both characters.

Again these were two characters we didn’t learn much about, always on the sidelines, but who cast their shadows over Celia and Marcus. If we ever got a companion novel to The Night Circus I’d love to read something from their perspective, their pasts and the competitions they’ve forced their students into would make for an interesting story.

Holland
A Conjuring of Light by V.E. Schwab

In the last book of the Shades of Magic trilogy we got to see more of Holland’s past, and what made him the character we were introduced to in A Darker Shade of Magic. It was heartbreaking, but it added so much to his development and made Holland my favourite character in A Conjuring of Light.

This would not be a list of my favourite villains if it didn’t include AIDAN, although as an AI I’m not sure you’d class him as ‘villain’ the same way you can the other characters I’ve featured. AIDAN is programmed to ensure the survival of the fleet and that’s what he does, he just sacrifices countless lives to do it.

Cardin was Jude’s villain in The Cruel Prince, even if he didn’t end up being the main villain in the story. We didn’t get to see much more of him besides the bully Jude saw him as, but based on what little glimpses we got into his life (and that ending) I can’t wait to learn more about his character.

While it doesn’t excuse what he did Gabriel had a heartbreaking backstory behind what led him to become a villain. He’s insane, but he lost someone he loved and as an AI was he ever really ‘himself’? It makes for a very interesting character, and again the ending to LifeL1K3 means I can’t wait to learn more.

So what do you think? Did you take part in this week’s Top Ten Tuesday, if so let me know what you picked for this week’s themed free-for-all. Are any of these characters favourite villains of yours, and which villains do you love more than the heroes of the same story?

54 thoughts on “Top Ten Tuesday: Top Ten Villains I Loved More Than or as Much as the Heroes”