Ever since one of my friends went a few years back and posted some truly beautiful pictures Croatia has been high on my must-visit list. Still I didn’t expect to actually make it there myself for a few more years at least, but when my sister’s original plans fell through guess who got a free holiday.

Well, I had to pay for my flights and spending money of course, so I guess it was a mostly free trip.

We flew into Zadar, and spent the day there. Zadar reminded me of Venice, and when you consider how close Croatia is to Italy that probably isn’t much of a surprise (it certainly explained the amount of Italian restaurants we saw in Croatia). Our hotel was in the centre of Zadar’s Old Town so we spent most of our time exploring the streets, and later we wandered along the coast to the Sea Organ and the Monument to the Sun.

The next day we hired a driver to take us to Dubrovnik, and on the way stopped off at Krka National Park. The waterfall there is probably one of the main images people associate with Croatia, so it was a must on our trip. Me and my sister ended up taking the boat to the waterfalls on the Sunday, which according to our driver is the least busiest day to visit, but it was still packed. We swam in the water around the falls and took plenty of pictures. I also ended up falling in the water, so my beach wrap got drenched, not ideal but it was so beautiful there I couldn’t complain too much. 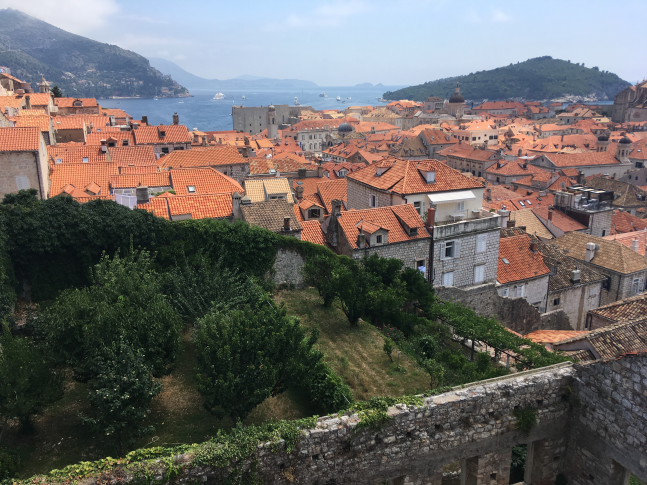 We arrived in Dubrovnik in time for the World Cup Final. Even though Croatia lost the match you wouldn’t have been able to tell; when we went out that evening car horns were honking, people were hanging out the windows waving flags and cheering. I even saw one guy sat on the hood of the taxi while it was driving, waving a flag around.

Dubrovnik is where they filmed Game of Thrones and the second I stepped into the Old Town I could almost see the shots from the TV series, walking through the streets was like walking back in time or walking through King’s Landing. We walked along the Walls of Dubrovnik, which looked out over the top of the city and out to the harbour, and in the evening to make the most of our last night we headed up in the cable car to see the sunset.

Advice (a.k.a. learn from my mistakes) While I’ve now been to Zadar, Krka National Park and Dubrovnik I know there’s a lot more the country has to offer, a lot more beauty to experience, so I will be going back again one day. Overall Croatia was a cheap holiday (which was very handy for me because it wasn’t a holiday I expected to be going on, and given how much money I’d already spent on Dubai and Mauritius I didn’t have a lot of spare cash lying around) so if you’re looking for a budget break there’s no better place (certainly no more beautiful place)!

45 thoughts on “A Postcard from Croatia”