Top Ten Tuesday is a weekly feature hosted by That Artsy Reader Girl. Each week there is a new topic for bloggers to choose and list their top ten. This week’s theme is Top Ten Books with Sensory Reading Memories.

I’ve been reading for a long time; I picked up the Harry Potter series as a child, I picked up Twilight as a teenager, and I never really stopped picking up books. In all the years I’ve been reading there are some books that stick out so clearly in my mind, not so much because of the story or the writing but because of the memory attached to them. The topic this week is ‘Sensory Memories’, but I’ve chosen to feature my more sentimental memories when it comes to books. 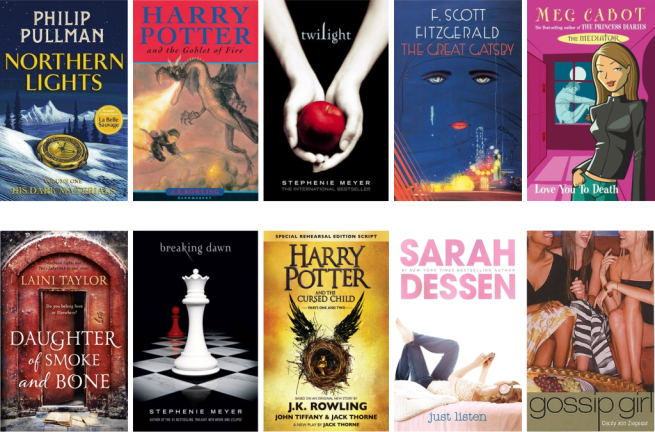 One of my best friends was as big a reader as I was in high school, and one of her favourite series from childhood was His Dark Materials. She spent ages trying to convince me to pick this book up, and I have a really clear memory of us standing in WHSmiths (a UK bookstore chain) talking about this book before I eventually decided to buy it.

No surprise I loved the series so we spent a good while fangirling over the books and the characters. She was also the one I went to see the movie with when it was released, but it’s not a good movie so the less said about that the better.

Harry Potter and the Goblet of Fire by J.K. Rowling

I’ve spoken about this book and this memory before when I took part in the Unforgettable Bookish Memories Tag. My parents gave me a copy of Goblet of Fire as we were heading home from holiday, and I stayed up way too late until it got too dark to see properly reading it. I can’t remember whether I put this book down because my parents told me too or if I fell asleep reading it but I do know I didn’t get to the end of Goblet of Fire in one sitting.

Now I know there are better books than Twilight out there, but this is the book I credit with getting me into the YA genre and I can so clearly picture in my mind when I brought this book as well. I was standing in the Bluewater branch of Waterstones with my friend (the same one who recommended Northern Lights to me) browsing the bookshelves and I picked this one up. I read the blurb and knew Twilight was a book I needed to read.

Once I finished Twilight I dove straight into New Moon, and over the next couple of weeks I re-read both books more times than I can count.

I only read The Great Gatsby after I saw the movie; this isn’t my usual genre but I really enjoyed the film adaptation so I figured I should read the book as well. However that isn’t why The Great Gatsby made my list this week. My sister, who isn’t a big reader at all, loved the movie and wanted to read the book too and this ended up being the one book she took with her when we went to Cancun later that year.

Love You to Death by Meg Cabot

This was a series that defined my teenage years. I picked up these books on the recommendation from a couple of my friends and loved them. I have so many memories of sitting with my friends while we were in maths class (supposedly paying attention to the teacher) talking about these books. The wait for the Heaven Sent was my first experience enduring the agonising wait for a book to be released.

Daughter of Smoke and Bone by Laini Taylor

When I first read this book (it was recommended to me by a friend, the same friend I’ve referred to three times in this post so far) I fell in love with Laini Taylor’s writing and everything about this book, but my favourite part was the way she described Prague. It was this book that led to me going to Prague myself a couple of years later.

You can tell how much of a defining experience the Twilight series was for me growing up just because of the fact that I included two books in this week’s post.

When I went to Milan with my parents one year I was only allowed to take one book with me (cruel I know but we had limit luggage allowance so sacrifices had to be made) so I chose the newly released and anticipated Breaking Dawn. I finished this book on the plane journey over so for the four days I was in Milan I was forced to re-read this book over and over again, and I think it was that more than anything else that made me start hating this series.

Harry Potter and the Cursed Child by J.K. Rowling

So the story isn’t great, I’ll admit that, but I saw the play live in London before the book was even released. Once the first half was over in the interim before the second half started (because I saw part one and part two on the same day) I met a couple of my friends for dinner and we sat in Five Guys for about an hour talking about the play. This book just reminds me of the amazing day I had.

Sarah Dessen is not only one of my favourite YA contemporary authors but the author who led me to the genre in the first place. Just Listen was the first book I picked up by her and I loved it, after I finished reading I immediately went out and brought all the others she’d released at the time.

I ended up recommending this book to my friend (the same one who’d recommended so many amazing books to me) and she loved it as well. While Just Listen is my favourite book by Sarah Dessen, The Truth About Forever is my friends’.

This is the only book on my list which I never read, and to be honest I likely won’t be reading it either. This was a series my friends loved, and whenever I see these books or anything related to the TV adaptation I think of them and all the conversations I overheard as they fangirled over the books and over Ed Westwick.

So what do you think? Did you take part in this week’s Top Ten Tuesday, if so what are some of the books that carry strong sensory or sentimental memories for you? Is there a friend who defined your reading experiences growing up, or has there been a series you and your friends fangirled over while in high school?