Top Ten Tuesday is a weekly feature hosted by That Artsy Reader Girl. Each week there is a new topic for bloggers to choose and list their top ten. This week’s theme is Top Ten Books that Awaken the Travel Bug In Me.

Next to reading and blogging travel is definitely one of the great loves of my life, in fact if it was free to travel I’d never come home, and it doesn’t take much for a book to make me want to drop everything and hop on a plane somewhere far away. There are a lot of books that have inspired me to travel, and I don’t think a lot of these will come a massive surprise because I know I’ve spoke about them all before. 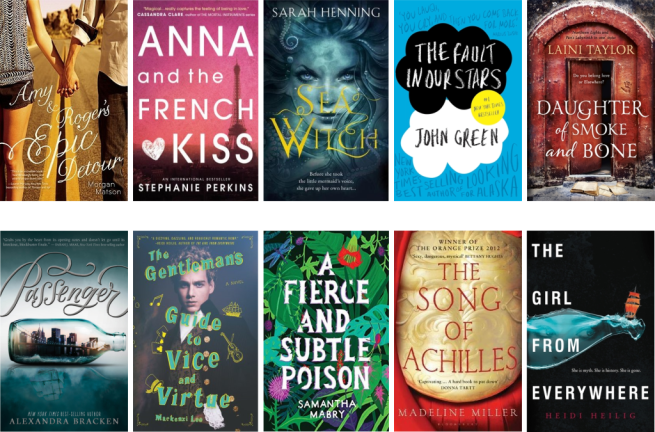 This is both the first book on my list this week, and the one that leaves me feeling the most wanderlust.

Morgan Matson takes us on Amy and Roger’s road trip across the West Coast of the USA and it never fails to make me want to have the same experiences; exploring Yosemite and travelling along the loneliest road in America with a friend on our own road trip.

Anna and the French Kiss by Stephanie Perkins

Throughout the whole of her Anna and the French Kiss trilogy Stephanie Perkins develops the setting as much as the plot. Anna is a new-comer in Paris so we get to see the city through her eyes as she explores the sites with Étienne. I’d been to Paris myself before picking up Anna and the French Kiss, but reading this book made me want to go back again.

While this book takes places in a fictional town somewhere between Denmark and Sweden Sarah Henning has paid a lot of attention to the world and culture of both countries, so while Havnestad may not be real the countries it’s inspired by aren’t. The Lithasblot festival that takes place in Sea Witch, the descriptions of the games and food, made me want to experience it all for myself.

The Fault in Our Stars by John Green

Daughter of Smoke and Bone by Laini Taylor

Of all the books on my list this week this one should be the least surprising.

Laini Taylor is a master when it comes to world building, and she’s written Prague in such a way that makes me believe magic really does exist in the city. I went to Prague a few years back and the main reason I travelled there was because I read and loved this book so much.

As much as I would love to be able to travel through time that’s not the reason Passenger made my list this week. Yes Etta and Nicholas travel through time, but they also travel around the world and Passenger takes us from New York to London to Angkor to Paris to Damascus. There is so much detail paid to the countries they visit, both in terms of the setting and the time period.

The Gentleman’s Guide to Vice and Virtue by Mackenzi Lee

The Gentleman’s Guide to Vice and Virtue is another road trip book so it shouldn’t be a surprise it made my list this week. This time we’re taken on a tour around Europe – though Paris, Versailles, Barcelona and Venice – as Monty, Percy and Felicity try to outrun the trouble Monty has managed to land them in.

A Fierce and Subtle Poison by Samantha Mabry

Nine times out of ten what I think magical realism as a genre does really well is limit the amount of world building but still create an incredible and beautiful story. In A Fierce and Subtle Poison a lot of the magic is simply described away as ‘magic’, but the setting of Puerto Rico itself was wonderfully detailed and expanded on leaving me want to visit the country myself.

The Song of Achilles by Madeline Miller

Granted I’m never going to be able to see Greece and Troy as Achilles and Patroclus did in The Song of Achilles (or Aiaia where Circe lived for thousands of years) but I’ve wanted to go to Greece for so long now that every story set there, or inspired by Greek mythology, just makes me more determined to get there ASAP.

Another time travel book, but this one for a slightly different reason to Passenger.

While Nyx does travel around the world as much as she travels through time it’s the freedom she has to travel at will that inspires the wanderlust in me. As long as Nyx has a map she has a destination; it doesn’t matter what time it is or whether the city is fictional or not, there are no boundaries.

So what do you think? Did you take part in this week’s Top Ten Tuesday, if so let me know what books make you want to travel? Have you been to any of the cities these books are set in?

37 thoughts on “Top Ten Tuesday: Top Ten Books that Awaken the Travel Bug In Me”