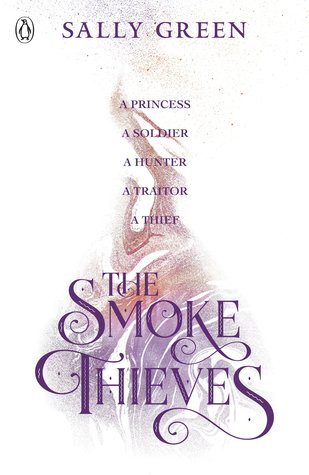 A princess, a traitor, a soldier, a hunter and a thief. Five teenagers with the fate of the world in their hands. Five nations destined for conflict.

In Brigant, Princess Catherine prepares for a political marriage arranged by her brutal and ambitious father, while her true love, Ambrose, faces the executioner’s block. In Calidor, downtrodden servant March seeks revenge on the prince who betrayed his people. In Pitoria, feckless Edyon steals cheap baubles for cheaper thrills as he drifts from town to town. And in the barren northern territories, thirteen-year-old Tash is running for her life as she plays bait for the gruff demon hunter Gravell.

As alliances shift and shatter, and old certainties are overturned, our five heroes find their past lives transformed and their futures inextricably linked by the unpredictable tides of magic and war. Who will rise and who will fall? And who will claim the ultimate prize?

“The money from selling demon smoke was good, although demons were rare and dangerous. The whole process of killing demons and selling smoke was illegal, but the sheriff’s men didn’t bother them if they were discreet.”

In Pitoria we meet Tash as she prepares to lure a demon from hiding so her boss Gravell can kill it and take the smoke which emerges from its dying body to sell on the black market. In Brigant we meet Catherine as she prepares to witness the execution of a traitor, struggling with her feelings for her guard Ambrose when she has already been promised in marriage to the prince of Pitoria. In Calidor we meet March a refugee who’s planning his revenge against the prince responsible for the death of his people.

There are five POVs in this book. We’re told the story from the perspectives of Tash, Catherine and March as well as Ambrose, who seeks the truth as to why his sister was branded a traitor and executed for her crimes, and Edyon, who is the bastard son of the prince of Calidor. I’ve read books with multiple POVs which haven’t been written well but The Smoke Thieves was not one of them. Sally Green introduced Edyon about a quarter of the way through the story which allowed room for the other four characters to be introduced, and I loved reading all the ways the five characters stories intertwined.

“Edyon’s hand reached out and, as he touched the bottle, the smoke seemed to gather round his fingers, as if it were alive to his presence . The bottle was in Edyon’s hands now, heavy, as if full of sand, not smoke. Edyon gazed into the swirling cloud of purple. It was almost hypnotic.”

It’s in Pitoria, the home of princess Catherine’s betrothed, where we meet Edyon, whom March and his friend Holywell are searching for. When Edyon steals a bottle of demon smoke from Gravell he isn’t aware of the events he has set in motion. While Gravell and Tash are determined to get the bottle back no matter the cost and Edyon has no idea what it’s potential really is, the smoke holds the answers Ambrose is looking for and could mean war for Pitoria, Calidor and Brigant.

The beginning of The Smoke Thieves was slow as we were introduced to the world and all the different characters whose journeys we’d be following. There was action to keep my invested in the story, but there was a lot more build up in the opening chapters. It was incredibly well written, small hints dropped and each character had their individual characteristics and motivations explored before they came together.

“What’s that?” Gravell asked.
“Nothing…just thinking.”
“I’ve warned you about that before,” Gravell deadpanned, then added. “Not about bloody boots, I hope.”

Tash is the first character we’re introduced to in The Smoke Thieves, and she’s definitely one of my favourites. Taken from her family by Gravell to help him hunt demons she sees the gruff demon hunter as her family; she’s loyal to him but not blinded by her loyalty either. Tash is only thirteen so she does some stupid and reckless things trying to get what she wants, which more often than not is boots, but she’s smart, tough, and after helping hunt them something of an expert on demons.

It took me a while to fully appreciate Catherine’s character, and by a while I mean it’s only looking back on the story that I’ve realised how well her development throughout this book was written. That said I’m not a massive fan of the love triangle that seems to be developing between Catherine, Ambrose, and Tzsayn.

Catherine was raised in a place where women have no power, and it’s only through her arranged marriage that she gets the opportunity to change that. She wants to make the people of her new kingdom love her so she teaches herself their traditions, adopts their fashions, and makes herself someone to be looked up to.

March doesn’t remember much about his home or his family, having lost both to the war waging between Brigand and Calidor when he was young, but he wants vengeance for his people. There are times when it felt like March was being manipulated by Holywell rather than led by him; before they know the identity of the princes illegitimate son they will be delivering to his enemy all March thinks about is the pain it will cause the prince, but the more he gets to know Edyon the more he questions the choices they’re making.

“This is the crossroads. Your future divides here. The foreign man is watching you, There is a journey, a difficult one–” and she pointed to the wishbone– “to far lands and riches or–” and here she pointed to the cracked thigh bone– “to…pain, suffering and death.”

Edyon’s life has been shaped by the fact that he doesn’t know who his father is. He steals because it’s more of an impulse than anything else, and even knowing it gets him into trouble he can’t resist when he sees the demon smoke among Gravell’s belongings. Edyon has had an easy life compared to March and Holywell, which is a cause of scorn for Holywell, but he trusts them with his safety after having his life saved by March more than once.

The relationship growing between March and Edyon was one I loved reading. While March is hiding the truth from Edyon Edyon is an open book when it comes to the other boy. He doesn’t seem to hold anything back not even his feelings while March is much more hesitant, especially because he is aware of what he and Holywell are planning for Edyon.

“The king’s aim was one her mother had taught her early: he wanted Calidor, he wanted to avenge his defeat and take his brother’s kingdom, which he felt was his by right. And everything he did was driven by that aim, including the marriage of his daughter.”

There was a lot to develop in third first book. There are three separate countries – even if we don’t spend a lot of time in Calidor or Brigand – all with their own rules, leaders politics and way of life that need to be expanded on and Sally Green does that incredibly well in this first book. There is still some things I would love to see developed more in the next book, mainly the world of the demons which was only really glanced over in this book, but I never felt lost in The Smoke Thieves as Catherine travels from Brigand to Pitoria, or as March and Holywell travel from Calidor to Pitoria.

I enjoyed the whole book but the ending to The Smoke Thieves was what stood out for me, it was explosive as plenty of secrets were revealed and our five heroes finally realised what they’d be facing. Sally Green wrote a brilliant conclusion to what I think was a strong start to a new series, and I can already tell it’s going to make for an epic second book.

What did you think of The Smoke Thieves? Was it a favourite of yours or could you just not get into the story? Let me know.