One of the amazing things about reviews is that they can lead you to books you may never have picked up otherwise. The Bone Season series, the Percy Jackson books, Bone Gap. What those books all have in common is that they are stories I love, but ones I doubt I would have picked up had it not been for the reviews I saw on WordPress.

It also works the other way around. There have been books I’ve added to my to-read list that have quickly been taken off again when I saw one too many negative reviews. However, and I’ve said this before a few times, we all have different tastes in books so why do we trust others people’s opinions on books so much without trying giving it a chance ourselves.

How Do Reviews Influence Our Own Opinions and is it a Good Thing?

There’s always something that draws us to a book in the first place, normally the cover because it’s the first thing we see. Even in the case of the three books/series I mentioned at the beginning of this post there was something that led to me clicking on the review in an attempt to discover more about them. After the cover grabs our attention we read the blurb, and once we’ve done that we have a pretty good idea of whether the book in question sounds like something we’d enjoy or not. So why does the star rating, someone else’s review and more importantly someone else’s opinion, sway us.

In the case of good reviews it could be the hype, everyone loves the book so naturally you get a little swept away by it as well. But in the case of bad reviews, when maybe the reason the reviewer knocked off stars because they couldn’t connect with the main character or they didn’t feel the development was well done or the world building was weak, why do we feel the same.

I’m very swayed by negative reviews, to the point where I have removed books from my to-read list because the Goodreads rating was too low or because a blogger whose opinion I trust gave it a negative review. It’s got to the point where I tend to avoid negative reviews because I found they ended up influencing my opinion a little too much. Our reading tastes are our own, and no two people are ever going to enjoy exactly the same books in exactly the same way. While there have been books I haven’t enjoyed that the majority haven’t enjoyed as well – Stealing Snow for example – and there have been books I’ve loved that the majority have loved as well – A Darker Shade of Magic – that doesn’t mean there aren’t people who loved Stealing Snow and people who hated A Darker Shade of Magic. 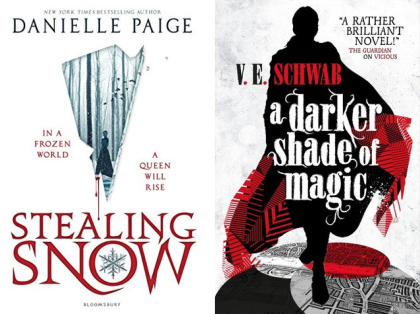 There is probably never going to be a book out there with a perfect five star rating on Goodreads, a book you will never find a negative review for because everyone in the world has read it and loves it. I am aware there are probably some books out there I would really love that I haven’t picked up, and probably won’t pick up, because of the bad reviews they have, but I’m still very much influenced by what the negative reviews have to say.

What’s the opposite of hype? Controversy, and I don’t mean the kind of controversy you could say Angie Thomas had for writing a book that brought light to the Black Lives Matter movement with The Hate U Give. I mean the kind of controversy both Carve the Mark and The Black Witch have. Now I haven’t read these books, all I can say about them is what I’ve heard from other people’s reviews, but as well as the bad reviews I’ve seen a handful of good reviews from people who read one of these books and really enjoyed them.

I said before we all have our own opinion on books and that includes this as well, what one person may see as controversial another may not pick up on. A Court of Wings and Ruin was another book that had a little controversy surrounding it. There were some comments made about how parts of the story were acephobic. I’ve read some good reviews that explain why, and go into more detail about it than I will in this post, however when I was reading I didn’t notice that. Again I’m not saying that parts of ACOWAR weren’t acephobic, or that people shouldn’t take them that way, just that this is my opinion on a book I’ve read.

I’m not saying we should all run out a buy a copy of these books, but maybe if the blurb interests you then trust your gut and give it go, despite what the reviews say. When it comes to reading I know what I like, better than anyone else, because I’ve lived with my reading taste all my life, so maybe I should start trusting myself more.

Do you find yourself easily swayed by bad reviews? Have you ever removed a book from your to-read list because of all the negative reviews you saw?

Why do you think reviews, either negative or positive ones, have so much sway over our own opinions?

When it comes to books do you think it’s better to trust your gut and the blurb or trust the reviews?

79 thoughts on “Discussion Time: How Do Reviews Influence Our Own Opinions and is it a Good Thing?”