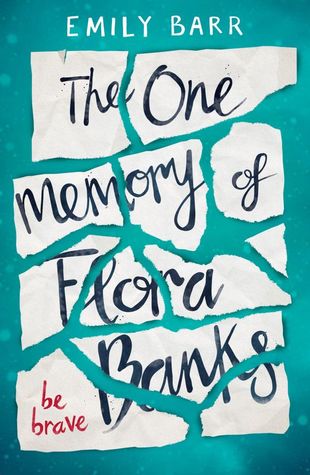 Title: The One Memory of Flora Banks

Seventeen-year-old Flora Banks has no short-term memory. Her mind resets itself several times a day, and has since the age of ten, when the tumour that was removed from Flora’s brain took with it her ability to make new memories. That is, until she kisses Drake, her best friend’s boyfriend, the night before he leaves town. Miraculously, this one memory breaks through Flora’s fractured mind, and sticks. Flora is convinced that Drake is responsible for restoring her memory and making her whole again. So when an encouraging email from Drake suggests she meet him on the other side of the world, Flora knows with certainty that this is the first step toward reclaiming her life.

With little more than the words “be brave” inked into her skin, and written reminders of who she is and why her memory is so limited, Flora sets off on an impossible journey to Svalbard, Norway, the land of the midnight sun, determined to find Drake. But from the moment she arrives in the arctic, nothing is quite as it seems, and Flora must “be brave” if she is ever to learn the truth about herself, and to make it safely home.

“Don’t panic, because everything is probably all right, and it it’s not, panicking will make it worse.”

After having a tumour in her brain removed when she was only ten Flora has been unable to retain any memories, instead she is forced to rely on the words scribbled on her hands to tell her her story. Until the night she kisses Drake before he leaves town to study in Norway, and all of a sudden Flora has a memory that sticks in her mind. However Drake was her best friends boyfriend, and by kissing him, falling in love with him, Flora loses Paige.

When her parents have to rush off to Paris to take care of her sick brother Flora has a chance to discover who she can be without them hovering over her. She starts exchanging emails with Drake and with each one falls deeper and deeper in love with him, until a message arrives that has her running off to Svalbard. Flora is completely alone in a new world, somewhere she is wholly unfamiliar with, but she knows Drake is close and she is determined to find him before her parents discover she’s gone missing.

“Although I don’t know much about anything, I know that I have a story. I know that it is not over. There are shades and shadows of adventures and people and wild new places.”

*Spoilers for The One Memory of Flora Banks below*

The amnesia makes Flora an unreliable narrator. When she finally catches up with Drake he claims he never kissed Flora, that she made up their romance in her head, and this is further proved when the emails Flora exchanged with ‘Drake’ turn out to have come from an account Flora created. I loved this twist, until it was later revealed that Drake did kiss her and lied about it. The second reveal didn’t really add much to the story, and in my mind it actually took something away from the impact of the first twist.

I hadn’t heard much about The One Memory of Flora Banks before I read it, but after reading it I wish I had checked out some of the other reviews because then I would have gone into this book with lowered expectations. It took me a while to connect with Flora’s character and her story, and while I understand that the way Emily Barr wrote this book, repeating sentences over and over, emphasised Flora’s amnesia after a while they became tired reading.

“I see a girl who has suffered a terrible damage to her brain. Someone who, it seems, is shut away by her parents to keep her safe. But inside there is a vibrant person, a traveller, and her memory of this boy Drake has propelled her into action.”

Flora was a great character, granted it took me a little while to connect with her but when I did I loved reading her journey in this book. Suffering from amnesia Flora is essentially stuck at ten, but she has such a pure and adventurous spirit that shines through as the story unfolds. With her parents away from home Flora can make her own decisions, for the first time in her life, and one of the things she decides to do is run off to Norway after the boy she loves.

The relationship between Flora and Drake felt really off to me. It’s insta-love but I think that worked in this book simply because of how child-like Flora was, however that being said it’s kind of creepy that Drake would kiss Flora when she is essentially ten years old in her mind. Physically Flora is older than that – I can’t remember her exact age but it’s around sixteen or seventeen – but you can’t write a character like Flora, a character who hasn’t been able to retain any memories since she was ten years old, and not have the romance between her and Drake feel creepy.

“We have had some times together—I wish you could have those memories, my darling. We’ve walked and laughed and been shopping and played hide-and-seek. We’ve watched films. We’ve sat up all night talking. You’re my universe.”

Unfortunately while Flora was a character I enjoyed reading, I can’t say the same for any of the other characters because they weren’t developed enough for me to enjoy reading about them. Jacob, Flora’s brother, supposedly plays a big part in her journey. His messages reach the adventurer in Flora, the wild spirit she has, but he’s hardly in the story at all and we never hear from him beyond his few emails and texts.

There were also characters who made really bad choices I can’t wrap my head around. Flora’s ‘best friend’ promises her parents she’ll keep an eye on Flora while they’re in Paris, but because of what happened between Flora and Drake Paige cuts Flora out of her life and doesn’t tell her parents that she isn’t checking in on their daughter like she promised. How is this acceptable considering the problems Flora has, and the fact that the amnesia has essentially left her at ten years old?

“There is something that the parents are keeping secret. I write it on a note and stuff it into my pocket. ‘M&D have a secret from me.'”

*Spoilers for The One Memory of Flora Banks below*

At the end of this book it’s revealed that Flora’s parents have been drugging their daughter, keeping her on tranquilisers to keep her adventurous spirit subdued. When he discovered this Jacob ran away to Paris rather than be a part of what his parents were doing to their daughter. I feel like there were better ways this could have been dealt with considering this feels very much like child abuse. The fact that Flora’s parents had to get these drugs off the internet because “no doctor would allow that kind of long-term dependency” (an actual quote from the book here) tells you this is not something social services, or even the police, would allow to happen.

There were things I enjoyed about this book; Flora’s character was endearing, her journey was well-paced, and the setting of Svalbard fuelled the wanderlust in me. However it was everything else about The One Memory of Flora Banks that brought my rating of this book down. The other characters weren’t well written and their choices made no sense which just ended up annoying me.

What did you think of The One Memory of Flora Banks? Was it a favourite of yours or could you just not get into the story? Let me know.

38 thoughts on “The One Memory of Flora Banks”