Top Ten Tuesday is a weekly feature hosted by The Broke and the Bookish. Each week there is a new topic for bloggers to choose and list their top ten. This week’s theme is Top Ten Books I Want my Future Children to Read.

While this could change at the moment I don’t see myself having children. However one of my younger cousins has developed an all-consuming love of Harry Potter, the series that kick-started my obsession with reading, so for this week’s Top Ten Tuesday topic I’ve done a list of series, author and book recommendations for her for once she’s ready to move on from Harry Potter. 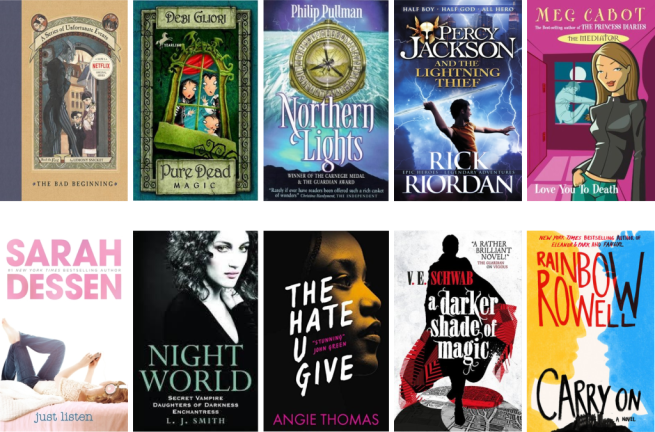 A Series of Unfortunate Events by Lemony Snicket

While I don’t remember a lot of the finer details of Snicket’s A Series of Unfortunate Events I do remember these books being so much fun to read, and when it comes down to it that’s what I want for my cousin, for her to have fun reading.

Think the Addams family but for young children – a series with more magic, slightly less darkness, and plenty of mythical creatures – and you have the Pure Dead books. I think this is possibly the perfect series to jump into immediately after finishing Harry Potter.

His Dark Materials by Philip Pullman

With The Book of Dust having recently been released this is a great recommendation because now the series doesn’t have to finish with The Amber Spyglass, an ending which I still find heartbreakingly bittersweet even today.

Percy Jackson and the Olympians by Rick Riordan

For her Early Teens I’d Recommend…

While I never got into The Princess Diaries Meg Cabot’s Mediator series pretty much defined my early teens. Her writing is fun and bubbly, and I have so many fond memories of gossiping about the books with my friends when I should have been concentrating on my maths teacher.

Just Listen was the first Sarah Dessen book and the first YA contemporary book I picked up in my early teens. I fell in love with her writing and her characters and I think even today her most recent releases are incredible, and her stories definitely stand the test of time.

Before I picked up Twilight I read L.J. Smith’s Night World series and these were the books that got me into the YA/Middle Grade paranormal genre. Although the last book in the series still hasn’t been released there are nine great stories for my cousin to get started on.

For her Late Teens I’d Recommend…

If I were to pick one book that I’d say is the defining read of 2017, for me at the very least, it would be The Hate U Give. This really has been a story everyone’s been talking about, and I think even years down the line when my cousin is in her late teens it will still be an important book.

A Darker Shade of Magic by V.E. Schwab

No one should be surprised to see A Darker Shade of Magic on my list. This is a book I will recommend to anyone and everyone, and really it’s just any excuse to bring up my favourite series and try and get someone else hooked on V.E. Schwab’s writing.

Carry On by Rainbow Rowell

It seems almost fitting that as my cousin is discovering her love of Harry Potter the last book I’m recommending for her to pick up sometime in the future is Carry On. In my opinion Carry On had all the magic of Harry Potter, but with less of the seriousness.

So what do you think? Did you take part in this week’s Top Ten Tuesday, if so let me know what books you’d recommend to the next generation.

57 thoughts on “Top Ten Tuesday: Top Ten Reading Recommendations for my Cousin Through the Years”