Top Ten Tuesday is a weekly feature hosted by The Broke and the Bookish. Each week there is a new topic for bloggers to choose and list their top ten. This week’s theme is Top Ten Yummy Foods Mentioned in Books.

I adapted the theme a little this week. Instead of talking about books that feature yummy foods, I’m going to talk about the books I’ve read that make me want to bake.

Baking is one of my favourite things to do. A year and a half ago it seemed like I was baking all the time; I’d make gingerbread men and sugar cookies, a variety of cupcakes and muffins, cheesecakes and birthday cakes. Granted baking has fallen in the wayside a little as blogging takes up most of my time, but when I read books that feature the most mouth-watering descriptions of food I really want to try my hand at baking them so I can taste the food I’m reading about for myself. 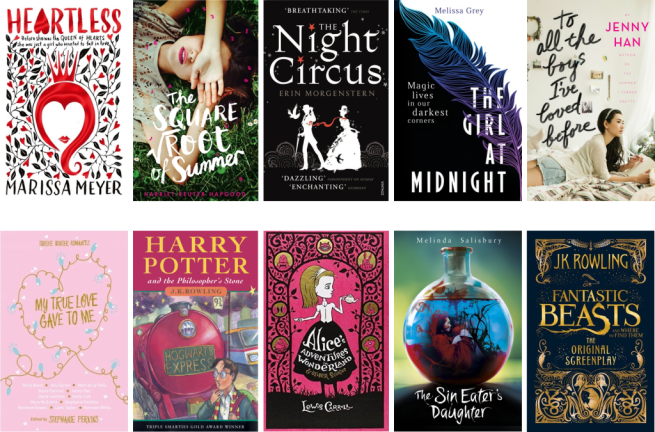 It’s this book, more than any other on this list, that makes me want to bake. It wasn’t just the description of the lemon tarts or the rosewater macaroons Cath made that inspired me, but her passion when she talked about baking or her dream of owning the best bakery in all of Hearts.

The Square Root of Summer by Harriet Reuter Hapgood

This is another book that features a character who’s a baker to inspire me. Thomas comes back into Gottie’s life one day and openings up her world once more; bring in life and colour and cinnamon muffins baked late at night when everyone else is asleep.

The Night Circus by Erin Morgenstern

Every time I read The Night Circus I’m always inspired by the descriptions, not only of the world and the magic but of the food as well. Food you can buy at carnivals, festivals, or circus’ always tastes better than the same food brought and eaten at home. I think it’s because it’s not just the food you’re tasting, but the atmosphere and the magic of the place you’re at.

The Girl at Midnight by Melissa Grey

One of the best things about baking is eating what you make, and there’s a reason I stick to sweet things like cookies, cupcakes and cheesecakes. The Avicen race in The Girl at Midnight series have a sweet tooth, and so do I. Every time Echo visits the nest under New York city there’s some kind of sweet on hand she steals a handful of.

Another character who’s a baker to add to this list (really this post could be called Top Ten Characters Who Bake and Inspire Me). However it’s not just Lara Jean’s love of baking that inspires me but how close she stays to her Korean roots and the way her father cooks her and her sisters’ Korean food.

My True Love Gave to Me: Twelve Winter Romances by Stephanie Perkins (Editor)

There’s something about Christmas in general that makes me want to bake. Gingerbread men and mince pies, Christmas puddings and yule logs, just mention the word ‘Christmas’ and I’m inspired. I read this book in December last year, and one of my favourite stories was Welcome To Christmas, CA featuring a baker and magically tasty gingerbread.

Harry Potter and the Philosopher’s Stone by J.K. Rowling

When I first read this book I loved the descriptions of the food at Hogwarts as much as Harry probably loved eating it. I wanted to go to Hogwarts myself and it wasn’t just because I wanted to learn magic; I wanted to eat Bertie Botts Every Flavour Beans and Chocolate Frogs on the Hogwarts Express, to be a part of the feasts Hogwarts put on for Halloween and Christmas.

You could say this book is similar to Heartless, given it was inspired by Alice’s Adventures in Wonderland, but the reasons they make me want to start baking are very different ones. Alice’s Adventures in Wonderland is full of strange food and drink; from the Eat Me and Drink Me potions that make Alice shrink and grow to the Queen of Hearts jam tarts.

The Sin-Eater’s Daughter by Melinda Salisbury

I’ll admit this book seems like a strange pick for the topic; but as much as Twylla’s past as the Sin-Eater’s daughter shaped her journey in the first book, so did food play a part in her memories of her mother’s job. Every sin had a food attached to it that Twylla’s mother needed to eat to absolve the person of said sin, and any book with food automatically makes me want to bake.

Fantastic Beasts and Where to Find Them by J.K. Rowling

So maybe this one is more of a movie that inspired me to bake than a book. Between Jacob’s dreams of owning his own bakery, Queenie’s magically made strudel, and at the very end Jacob’s creations inspired by the magic he witnessed, it definitely counts in my mind.