Top Ten Tuesday is a weekly feature hosted by The Broke and the Bookish. Each week there is a new topic for bloggers to choose and list their top ten. This week’s theme is Top Ten Book Boyfriends/Girlfriends.

I don’t have book boyfriends/girlfriends, so instead I’ve adapted the theme a little this week and I’m going to talk about ten of my favourite OTPs.

Now this was a topic I did for one of the Freebie Weeks back in January, so I needed to be careful not to feature the same couples twice. I have plenty of OTPs and favourite couples so this wasn’t an issue, but if there are any characters you expected to see on my list this week (namely two characters from my favourite V.E. Schwab trilogy) that aren’t here, it’s because I’ve already featured them back in January. 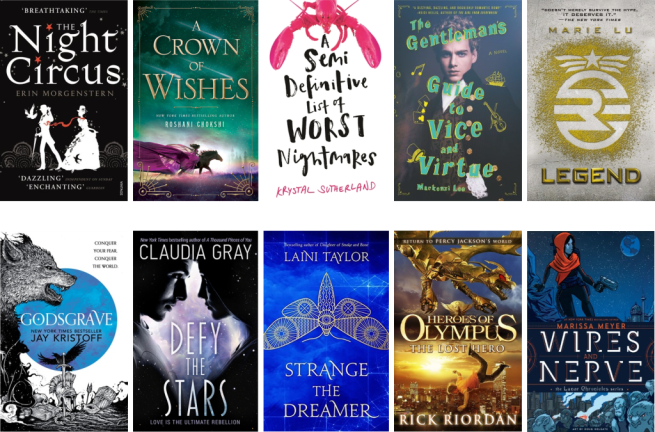 Marco and Celia
The Night Circus by Erin Morgenstern

“Everything I have done, every change I have made to that circus, every impossible feat and astounding sight, I have done for her.”

Vikram and Gauri
A Crown of Wishes by Roshani Chokshi

I actually featured Maya and Amar in my previous post, so it made perfect sense to feature Vikram and Gauri in this one. Their relationship took its time to develop, they went all the way from enemies, to uneasy allies, to friends, and finally to something more.

“It felt silly to say that he couldn’t bear to lose her. He never had her. She was not a thing to be possessed. But her entrance in his life had conjured light. And losing the light of her would plunge him into a darkness he’d never find his way out of.”

This was an incredible book, featuring an incredible relationship between Esther and Jonah. Both characters are broken in their own ways, but together they can forget it all and simply be. Esther is scared of the possibility of being hurt by Jonah but at the same time he makes her want to be brave.

“Yet even there, next to him, the most excellent person in the universe, she couldn’t stop herself from thinking that love was a pitcher plant. Sweet with nectar on the outside, but once you caught the scent and took the plunge, it ate you whole.

The whole time I was reading The Gentleman’s Guide to Vice and Virtue I felt like screaming as Monty and Percy kept missing opportunities and just miss communicating. It did make the moment they finally realised their feelings all the more worthwhile, until Monty put his foot in his mouth again.

The relationship between June and Day was one that was tested time and time again, and there seemed to be so much standing in their way. There were a lot of problems the two needed to overcome but they did it in the end, and always seemed stronger for it.

“Then Day reaches out and touches my hand with his. He encloses it in a handshake. And just like that, I am linked with him again, I feel the pulse of our bond and history and love through our hands, like a wave of magic, the return of a long-lost friend. Of something meant to be.”

*Spoilers for Godsgrave below*

Sorry Tric, as much as I loved you in the first book you were quickly replaced by Ashlinn in the second. The way Godsgrave developed their relationship was incredible, and as much as I hated Ashlinn in Nevernight I came to love her, just like Mia did.

“This feels like a dream,” Mia whispered. “And I don’t want to wake.”

She met her eyes, then.

“This is love,” Mia said simply.

And leaning in, she closed her eyes and gifted Ash a gentle kiss.

Abel and Noemi
Defy the Stars by Claudia Gray

There wasn’t much of a romantic relationship between Abel and Noemi in Defy the Stars but I think, I hope, that’s what the series is leading to. After everything they go through you can see how their relationship changes; Noemi goes from willing to sacrifice Abel’s life for her planet to desperate for another answer to save Abel’s life.

“Silently he traces out a new constellation, one only he knows. One with Noemi at the very heart.”

Lazlo and Sarai
Strange the Dreamer by Laini Taylor

She asked in a hesitant whisper, “Do you still think I’m a…a singularly unhorrible demon?”

“No,” he said smiling. “I think you’re magical, and brave, and exquisite. And…” His voice grew bashful. Only in a dream could he be so bold and speak such words. “I hope you’ll let me be in your story.”

Percy and Annabeth
The Heroes of Olympus series by Rick Riordan

Percy and Annabeth are one of my ultimate OTPs, my ‘I-will-go-down-with-this-ship’ pairing. Their relationship has been developing from the first book all the way to the most recent (I’m assuming considering I’ve only read up to The Heroes of Olympus series) and it’s been an incredible journey.

“We’re staying together,” he promised. “You’re not getting away from me. Never again.”

Iko and Kinney
Wires and Nerve Volume One by Marissa Meyer

Like with Defy the Stars this is another relationship not present in the first book, but where I hope the author will take the characters later in the series. Iko has always been a favourite character of mine, and she deserves not only her moment in the spotlight but to be happy as well.

“I misread the romantic tension, Didn’t I?”

So what do you think? Did you take part in this week’s Top Ten Tuesday, if so let me know what your favourite bookish OTPs are, or what books boyfriends/girlfriends you have.