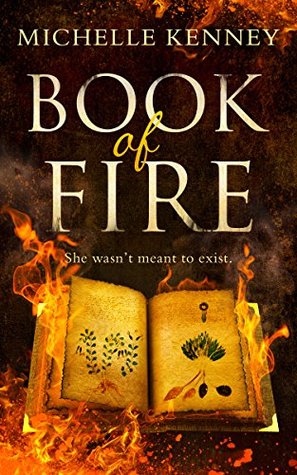 Life outside the domes is not possible. At least that’s what Insiders are told. Twins Eli and Talia shouldn’t exist. They’re Outsiders.

An unexpected forest raid forces Talia into a desperate mission to rescue her family while protecting the sacred book of Arafel from those who would use it as a weapon. As Talia and her life long friend Max enter the dome, she makes some unexpected discoveries, and allies, in the form of rugged Insider August, that will change the course of her life forever.

She’ll stop at nothing to save her family but will she sacrifice her heart in the process?

The Fire Sermon meets Gladiator in this brilliant YA debut.

I received an ARC of this book free from YA HQ. It in no way affects my views on Book of Fire.

“Sometimes I would climb to the top of the Great Oak – the one that had somehow survived the devastating effects of the biochemical warfare – and stare out at the impenetrable, domed expanse of bright white that climbed and dipped as far as the eye could see.”

When nuclear war destroyed the earth the domes were the only place humanity could survive, but Talia’s existence throws that theory out the window. Talia is an Outsider, she lives in a hidden village in the forests that have overtaken the cities, living off the crops her people grow and hunting for food. Arafel has an uneasy truce with the domes, in return for a few specimen from the outside they will be left alone. The Outsiders remain free to live their lives without fear of attack and the people in the domes remain closed off, ignorant to the fact that there the earth outside is once again able to sustain life.

That is until the Sweepers start moving close to their village and a group including Talia’s brother, Eli, her best friend, Max, and her grandpa is sent out to discover more. Determined to help protect them, knowing her grandpa is frail, Talia follows in secret and when an unexpected raid takes Eli and Talia’s grandpa, unwilling to return home without them, Talia breaks in to the domes with Max to rescue her family.

“There was a stony silence while I mentally assessed the chances of making it out of his unit and finding Max, Grandpa, and Eli in this vast, genetically warped and technologically advanced world alone. They were not encouraging.”

Inside the dome is a different place, Talia is quickly separated from Max and lost in this new world where nothing is familiar. She is quickly found by August, a Commander General which puts him at the right hand of Octavia, the head of the domes. Talia isn’t sure she can trust August but she can’t save Eli and her grandpa on her own, and with no clue where Max is she needs all the help she can get.

However Octavia’s plan for Talia’s grandpa is not what she thought. Octavia wants to Book of Arafel, something her grandpa has kept hidden for years, and something he has now passed down to Talia.

When I first read the blurb for this book, particularly the part about the insiders living in domes, my mind went to Under the Never Sky. These two books are completely different but Book of Fire has a really intriguing concept. More of a dystopian story with a mix of fantasy I really enjoyed the plot, and loved Talia’s character because she’s the kind of heroine we need more in YA fiction. However I couldn’t get behind the world building, also there was a love triangle in this book which I saw coming a mile away and which I definitely wasn’t a fan of at all.

“Feral. That’s what they called us. Those who knew of us. It was ignorance bred from fear—fear of life on the outside, and fear of us.”

Talia is an incredible heroine; she is strong without being reckless and smart without being arrogant. When she sees her brother and he grandpa taken by the Sweepers she doesn’t hesitate before going after them; determined to free them, to bring her grandpa home and keep her brother safe the way she has her whole life. At the same time though she doesn’t expect anyone to put their own lives in danger for her mission. She keeps telling Max to return to Arafel, scared of losing him as well, and she doesn’t trust blindly. Even though August offers to help her free Eli and her grandpa Talia doesn’t fully trust someone that close to Octavia.

Family is important to Talia. She lost their father a few years ago, and ever since then her mother has always been fearful of what could happen to her children when they are out of her sight. That thought is what drives Talia when she thinks of how her mother could feel if she returns home without Eli, or later if neither of them ever return home. Eli and Talia have a close bond; Eli doesn’t speak and can’t hear and as such Talia is very protective of him, but Eli isn’t a weak character. He’s just as capable as his sister but in a different way.

I turned to August in confusion. “It’s not Max; they’ve got the wrong man!” I cried, unsure whether to feel worried or relieved.
“Excellent. I didn’t think he was much of a choice for a boyfriend,” he returned.
“You know Max isn’t my boyfriend!” I snapped.

The love triangle I mentioned earlier was one I wasn’t a fan of. It was the very definition of a love triangle trope; main character is suddenly caught between two boys, one is a childhood friend and the other is the newcomer in her life she isn’t quite sure she should trust but does anyway. On its own I could have got behind Talia’s relationship with Max, or her relationship with August, because there would have been more room to develop it. However squeezing the development of both relationships into this one book left me unable to connect with either of them, and most of the time I was just thinking; ‘really? Again?’.

“Her words struck a discord in my head. August’s true motivations were as unclear as ever, and Aelia’s acidity only made my suspicions worse.”

There was also another trope in this book I couldn’t stand; girl hate. When Talia first meets Aelia the other girl is instantly standoffish and abrasive, and as the book continues their interactions never seem to improve. Talia doesn’t trust Aelia, which considering where they are and the fact that Aelia is an Insider is understandable, but when you take into account the fact that August is not only an Insider but a Commander General and Talia trusts him, it’s less understandable.

When it comes to the characters in this book I liked them all individually, and thought they were well developed, but it was their interactions and relationships with one another that felt lacking.

“The scientific team, led by Octavia, looked back over history for a model civilisation to emulate. The success of the ancient Roman Empire stood out, and it didn’t take long for the terminology to follow. Unfortunately, over time more of their…practices have also been adopted.”
His tone has grown dark and I shuddered. I was certain Isca Pantheon was hiding secrets.”

I have mixed feelings about the world building in this book. On one hand I really liked the concept; the idea of humanity recovering in domes to protect them from the after effects of a nuclear war, the idea that outside life had recovered but the general population were being kept in the dark. Talia and Max come into the domes from the outside and find themselves in a complete foreign world where life has been modelled on the Roman Empire, the perfect example of a successful civilisation in Octavia’s mind. However that’s when things got complicated. While it was all well written and well developed the author mixed science with Greek myths and it just didn’t work for me, it felt like two completely different worlds being crammed together like mismatching puzzle piece. The book was well developed but in my opinion it wasn’t well developed enough to connect the science and the myths.

Dystopian books are never going to be a favourite of mine, and while Book of Fire was a good read – the plot hooked me so I was always interested in what would happen next, and the characters were individually well developed – there were just too many downsides. I couldn’t get behind the world building of the characters relationships with one another, and for me those are two important aspects in any book.

What did you think of Book of Fire? Was it a favourite of yours or could you just not get into the story? Let me know.