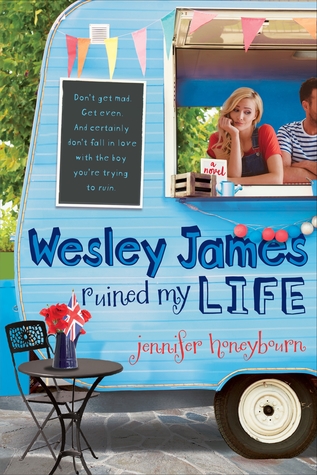 Sixteen-year-old Quinn Hardwick’s having a rough summer. Her beloved grandmother has been put into a nursing home, her dad’s gambling addiction has flared back up, and now her worst enemy is back in town: Wesley James, former childhood friend and life ruiner.

So when Wesley is hired to work with her at Tudor Tymes, a medieval England-themed restaurant, the last thing Quinn’s going to do is forgive and forget. She’s determined to remove him from her life and even the score for once and for all—by getting him fired.

But getting rid of Wesley isn’t as easy as she’d hoped. When Quinn finds herself falling for him, she has to decide what she wants more: to get even, or to get the boy.

“No need for introductions,” New Guy says with a smirk. “Q and I go way back.”
The smile freezes on my face. Because even though it’s been five years and he’s now taller than me and had a light scruff of facial hair, I recognize that smirk. Of course I do.
Wesley James.

Quinn thinks she knows what to expect from her summer; she plans to work at Tudor Tymes to save as much money as she can for her upcoming trip to London, that is until Wesley James moves back to town and back into her life. Once friends Wesley spilled a huge secret before he left when they were eight and now Quinn holds him responsible for breaking up her family. She hates that he is back in town; working alongside her at Tudor Tymes, joining the school band and, as a result, tagging along on her once-in-a-lifetime trip to London.

Wesley wants to put the past behind them, to be friends again, but Quinn refuses to let go until he has paid for what he did. She tries to get him fired, to remove him from her life anyway she can, but the more time her friends spend with Wesley the more they seem to like him, and the more time Quinn spends with him the more she struggles with her growing feelings for this boy she is supposed to hate.

“I may not be able to do anything about Wesley going to my school or being a part of concert band or even having the same circle of friends, but there is one thing I might be able to do.
Get him fired.”

On top of everything with Wesley it seems like the rest of Quinn’s life is falling apart. Her father’s gambling problem is causing big problems that come in the form of scary men asking for their money, and her grandmother, the reason Quinn is so passionate about London, has been put in a nursing home. She has Alzheimer’s and Quinn is struggling to accept that someone she loves no longer seems to recognize her.

What I expected from this story was a cute and fluffy YA contemporary, with a love-to-hate relationship and a quick read to pass the time. All I got was a quick read to pass the time. I couldn’t connect with any of the characters, and sometimes their actions made me really dislike them, I wasn’t interested in Quinn’s personal journey or her growing relationship with Wesley and honestly the reason she held such a grudge against him, trying to get him fired, was kind of ridiculous. I can’t even say I was interested much in the story itself because most of it was Quinn trying to sabotage Wesley and I found that got old very fast.

“I’ve wanted to go to England since I was a kid and my gran would tell me stories about growing up in London after the war. She used to go back every year and she’d always bring the best stuff home for me.”

Quinn has dreamt of going to London her whole life; she wants to walk the streets her grandmother did and see the sights she’s only heard about in old stories. Quinn is determined and hard-working, and she clearly has a close relationship with her family despite their flaws and issues. At the beginning I really liked her character because she was passionate about something and it was something I could relate to. Then Wesley came into the picture.

Wesley was probably the only character in this book I liked. He made a mistake as a child which, yes resulted in Quinn’s parents divorcing, but he was a child. He’s clearly moved on since then and doesn’t understand why Quinn can’t just put the past behind her. Wesley is remaking his life now he’s back in town; he gets a job, joins the school band, and wants to reconnect with the people he knew back then; which includes Quinn and her grandmother.

*Spoilers for Wesley James Ruined my Life below*

I couldn’t get behind Quinn’s actions or her motivation as she tried to get back at Wesley. She spent most of the book trying to get him fired and although she felt kind of guilty about her actions after the fact she never felt guilty enough to actually stop what she was doing. Also, there didn’t seem to be any resolution at the end; Quinn never apologises for what she attempted to do and there doesn’t seem to be any real consequences to her actions either.

A blond girl is standing on the other side of the glass. When Wesley looks over at her, she smiles.
“Do you know her?”
“Uh, yeah,” Wesley says, taking a step away from me. “That’s Jolie. My girlfriend.”

One thing I hated was the introduction of Wesley’s girlfriend, mainly because of the changes it brought about in Quinn’s character. Wesley’s girlfriend was only introduced about two thirds of the way through the story, and her only purpose was to throw a wedge in Quinn and Wesley’s growing relationship (believe me, I use that word lightly here). She was in the story for about two chapters before they broke up and I just found myself thinking ‘this is the most pointless character in this story’.

“I need to know if what almost happened between us at Travis’s party was all in my imagination, or if Wesley really is into me. So instead of knocking Caleb’s hand off my knee again, I lean into him.”

After discovering Wesley had a girlfriend, and believing he had been playing her, Quinn did something which turned me from disliking her character into downright hating her character. She started a ‘fling’ with a boy from her school band, a boy she knew liked her but who she had no feelings beyond friendship for, for the express purpose of making Wesley jealous. At one point Quinn even considers breaking things off with Caleb, knowing she doesn’t have romantic feelings for him, but when she sees how their ‘relationship’ is making Wesley act she keeps it going. She only breaks things off with Caleb when she discovers Wesley has broken up with his girlfriend.

If you enjoyed this book then that’s great, but Wesley James Ruined my Life just wasn’t for me. I couldn’t stand the main character, I wasn’t that interested in the plot, and it felt like the ending was tied up too neatly. It was as if the author had all these loose plot points, realised there needed to be a resolution, and wrapped them up with a sentence or too. It felt too clean and everything was resolved a little too quickly to make room for Quinn’s ‘happily ever after’.

What did you think of Wesley James Ruined my Life? Was it a favourite of yours or could you just not get into the story? Let me know.