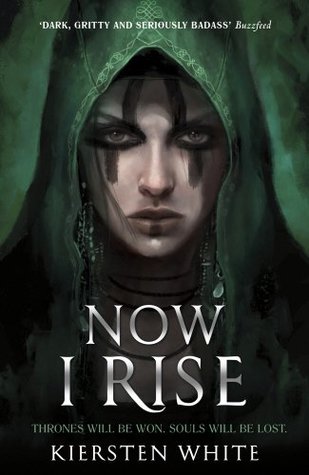 Lada Dracul has no allies. No throne. All she has is what she’s always had: herself. After failing to secure the Wallachian throne, Lada is out to punish anyone who dares to cross her blood-strewn path. Filled with a white-hot rage, she storms the countryside with her men, accompanied by her childhood friend Bogdan, terrorising the land. But brute force isn’t getting Lada what she wants. And thinking of Mehmed brings little comfort to her thorny heart. There’s no time to wonder whether he still thinks about her, even loves her. She left him before he could leave her.

What Lada needs is her younger brother Radu’s subtlety and skill. But Mehmed has sent him to Constantinople—and it’s no diplomatic mission. Mehmed wants control of the city, and Radu has earned an unwanted place as a double-crossing spy behind enemy lines. Radu longs for his sister’s fierce confidence—but for the first time in his life, he rejects her unexpected plea for help. Torn between loyalties to faith, to the Ottomans, and to Mehmed, he knows he owes Lada nothing. If she dies, he could never forgive himself—but if he fails in Constantinople, will Mehmed ever forgive him?

As nations fall around them, the Dracul siblings must decide: what will they sacrifice to fulfil their destinies? Empires will topple, thrones will be won…and souls will be lost.

“What, then, was left to her? She had no allies. She had no throne. She had no Mehmed, no Radu. She had only these sharp men and sharp knives and sharp dreams, and no way to make use of any of them.”

After leaving Mehmed and Radu behind and making her way to reclaim her throne, with only her loyal Janissaries at her back, Lada has finally made it home to Wallachia. However the challenge she faces is not one she was prepared for. Lada needs the support of the boyars before she can go against the prince but none of the boyars are prepared to back a woman, and time and time again Lada is forced back to her men with nothing to show for their long journey to Wallachia.

So instead Lada turns to brute force, terrorising the land, but when that leaves her no closer to her desired goal she is forced to take a close look at the allies she has, and the allies she could form to help her take the throne herself. Lada meets Hunyadi on the road and Mehmed is still willing to offer her support, but can Lada trust the man who orchestrated her father and brother’s deaths, and can she really go running back to Mehmed whenever she needs help.

“He knew Mehmed would build something truly amazing. He knew that Constantinople needed to fall for Mehmed to hold on to his empire. He knew that Mehmed was the greatest sultan his people had ever known. But, like his love for Mehmed, it was no longer simple.
Radu had seen what it took to be great, and he never again wanted to be part of something bigger than himself.”

Meanwhile in his quest to take Constantinople Mehmed has sent Radu into the city as a spy, to try and root out any weaknesses he can, gain a place at the emperor’s side and report back to Mehmed with anything he discovers. However as Radu and Nazira make it into the city they discover Constantinople is nothing like what they were told. The streets are not paved with gold, and what’s more the more time they spend with the people, inserting themselves into their lives in order to support Mehmed’s siege against the city, the more conflicted they start to feel about what it is they’re doing.

One of the things I wasn’t too keen on in the first book was the lack of action in places, And I Darken seemed to set up the world and the characters more than it did the plot, but that wasn’t an issue in Now I Rise. This book was so much more brutal in places, showing us the darker sides of Lada’s and Mehmed’s desires and the war they are each fighting. In the first book we only heard about Mehmed’s desire for Constantinople and Lada’s desire for Wallachia, in this book we see them start moving things in the place to take what it is they want.

Lada is determined to claim the Wallachian throne, and determined that nothing will stand in her way either. However she soon starts to realise how little power she actually has in a world where men rule everything. She is automatically looked down on as a woman, although there are times when she uses that disdain and disinterest to her advantage. Lada is a powerful fighter but she is not a strategist, and that seems to be her downfall when negotiating with the boyars.

As much as she wants the throne Lada is not fighting for the power alone. She wants to make Wallachia a better place, to be a better ruler than her father was and than the current Prince is. Her ideals and, despite her brutality, her sense of duty are what inspire people to fight for her, not just the Janissaries but the Wallachian’s she meets along the way.

Radu doesn’t want to leave Mehmed’s side, not as he plans to march on Constantinople, but Mehmed needs someone on the inside and that someone can only be Radu. Radu is willing to do anything to ensure his place at Mehmed’s side, but he is not equipped for sabotage behind the walls of Constantinople. Mehmed left very little instruction and the more Radu sees of life in the Constantinople, the more he gets to know the people who took him in, the more his feelings become conflicted.

The two Dracul siblings aren’t together in this book but they are never far from the others thoughts. While Lada struggles to negotiate with the boyars and with Hunyadi she really needs her brothers way with people and works, and as Radu struggles to find a way to sabotage the Constantinople he really needs Lada’s quick-thinking-action and brutality. It seems like the two of them work best together but their loyalties now lie in two different places; Lada’s with Wallachia and Radu’s with Mehmed.

“I have met your sister, and I have met Mehmed. They love themselves and their ambition above all else. They love what feeds their ambition, and when it stops feeding that, the love will turn to hate with more passion than either could ever love with. You love with all your heart, Radu, and deserve someone who can answer that with all of theirs.”

Once again the story is told from two POVs, Lada’s and Radu’s, and with Lada in Wallachia and Radu in Constantinople we mostly get their thoughts and memories of Mehmed. However we still start to see a different side to him through Radu’s eyes. Mehmed is a lot like Lada, both are willing to do whatever it takes, no matter how cruel, to get what they want. Mehmed can be almost self-serving and cruel at times, and it is this side of his character Radu gets a glimpse of as the siege against Constantinople begins.

“Wallachia needs you, and you deserve Wallachia. Let your loyalty be only where your heart is. Everything else can fall by the road and be trodden underfoot as we pass to our home.”

In And I Darken the book was largely set in the heart of the Ottoman Empire after Lada and Radu were sold to the sultan by their father, though we still saw Wallachia and Constantinople through the memories, dreams and ambitions of the characters. In this book we finally get to see both of these places without a veil of Lada’s nostalgia or Mehmed’s legend covering them, and each are somewhat less than what nostalgia or legend promised. Despite what the tales say Constantinople is not a Christian utopia in the heart of the Ottoman Empire, it is a city like any other which makes the siege all the more real and devastating. Wallachia is also not the paradise Lada remembers, it is run by an absent prince and cruel boyars who can do whatever they want to the people they rule.

I enjoyed Now I Rise more than And I Darken. Now that the characters, their back stories and the world they live in, have been set up in the previous book this one is set to realise Lada and Mehmed’s ambitions. The plot was fast paced and kept me on the edge of my seat until the very end; if you thought And I Darken ended in an interesting place of Lada’s, Radu’s and Mehmed’s story Now I Rise knocks it out of the water.

What did you think of Now I Rise? Was it a favourite of yours or could you just not get into the story? Let me know.