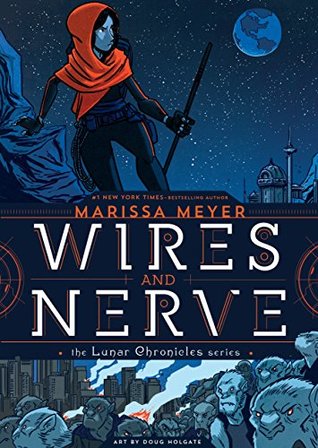 In her first graphic novel, #1 New York Times and USA Today bestseller Marissa Meyer follows Iko, the beloved android from the Lunar Chronicles, on a dangerous and romantic new adventure—with a little help from Cinder and the Lunar team.

In her first graphic novel, bestselling author Marissa Meyer extends the world of the Lunar Chronicles with a brand-new, action-packed story about Iko, the android with a heart of (mechanized) gold. When rogue packs of wolf-hybrid soldiers threaten the tenuous peace alliance between Earth and Luna, Iko takes it upon herself to hunt down the soldiers’ leader. She is soon working with a handsome royal guard who forces her to question everything she knows about love, loyalty, and her own humanity. With appearances by Cinder and the rest of the Rampion crew, this is a must-have for fans of the bestselling series.

“These monsters are after my friends, and I will do anything – absolutely anything – to keep them safe.”

Set in the months after she reclaimed her throne from Levana Cinder finds herself struggling to track down the wolf-hybrid soldiers still on Earth. Unwilling to return to Luna and face possible enslavement at the hands of another power-hungry Lunar monarch they are wrecking havoc on Earth and threatening the hard earned peace alliance between the two planets. Knowing she is the only option, someone Cinder and wholly trust and someone who would be very hard to take down, Iko decides to track down the soldiers and bring them back to Luna to answer for their crimes.

“I’m resilient. I’m trustworthy. And I would do anything for Cinder.
So why shouldn’t it be me?”

However despite her overwhelming success there are still soldiers who escape capture, and it isn’t long before those escapees come back to haunt Iko as they go on the offensive against Cinder and against all the people Iko cares about. Even with help from Thorne, Cress and Kinney Iko does not have an easy task ahead of her.

It was all too easy to jump back into the world of The Lunar Chronicles again. Wires and Nerve was a quick read, with volume one building up to what promises to be an amazing volume two; full of danger, action and more appearances from all my favourite characters.

“I know I’m not flesh and blood. No nerve endings. No heartbeat. Just a robot with artificial emotions and a disposable body.
I know I’m not really human.
But aces and stars, I wish that I was.”

Iko was more of a secondary character in the original series but in this book she shines through as a main character. She is the same android she has always been – loyal to Cinder and the friends she made, bold, bright, bubbly, and unique among androids – but this time we get to see some of her doubts, insecurities, and more human emotions. Despite playing a large part in the rebellion Iko’s role has gone largely unrecognized, and despite her uniqueness she is seen as nothing more than a faulty android by people outside of her small circle of friends.

“I misread the romantic tension, Didn’t I?”

The small hint at a possible relationship between Iko and Kinney in Winter was more developed in this graphic novel, but it is still just an idea. The two have more of a love/hate relationship than anything else but there is definitely romantic tension between the two of them.

Although Wires and Nerve was about Iko’s journey we still got small glimpses at the other crew members from the Rampion. Cress and Throne both played a larger part in Iko’s journey, as did Cinder still in Luna. We got small glimpses of Jacin, Winter, Kai, Scarlet and Wolf and it was wonderful seeing all my favourite characters again in a brand new story.

“Once upon a time, there were nine unlikely heroes.”

Wires and Nerve is a book that bridges the gap between Winter and the last novella in the Stars Above collection. We see Luna healing after the scars Levana’s reign left on the country, we see the treaty between Luna and Earth being threatened by the wolf-hybrid soldiers, and we see Cinder struggling with her decision to abdicate her throne and make Luna a republic. This book allows us to see both planets recovering after the rebellion and allows us to see in more detail the smaller steps that are being taken to prevent someone like Levana ever gaining power again.

Wires and Nerve was a quick but addictive read, I nearly missed my train because I was too engaged in the story. It was wonderful going back and seeing all my favourite characters again, as well as seeing the trials they need to face now Levana is out of the picture. Wires and Nerve Volume One was all about building up the plot for, what I hope, will be an explosive second volume.

What did you think of Wires and Nerve? Was it a favourite of yours or could you just not get into the story? Let me know.

29 thoughts on “Wires and Nerve”