Top Ten Tuesday is a weekly feature hosted by The Broke and the Bookish. Each week there is a new topic for bloggers to choose and list their top ten. This week’s theme is Top Ten Books I Loved Less/More Than I Thought I Would.

A lot of the time I read books I have been recommended by other bloggers, so I tend to love them as much as I expect or a little bit more. A lot of the time when I say I enjoy books more than I thought I already knew I was going to love them I just ended up enjoying them that little bit more. The books I picked for this week’s Top Ten Tuesday theme are books I was genuinely surprised by; five in a good way and five in a bad way. 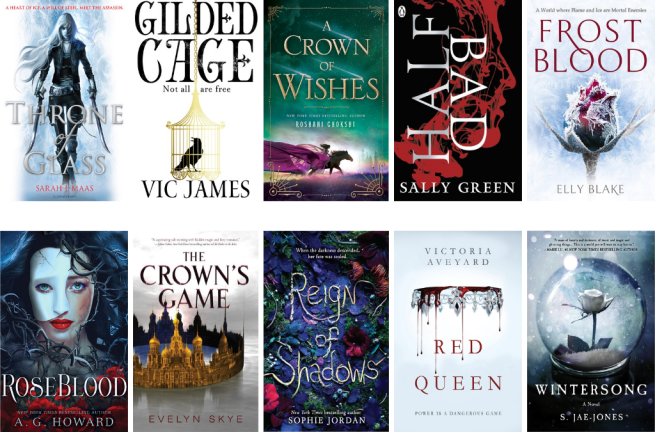 Books I Loved More Than I Thought I Would

In terms of the series the first book is the weakest one, however before picking up Throne of Glass I’d heard a lot of negative things about it. In the end I think my opinions were so low the only place they could really go was up. Throne of Glass had its problems don’t get me wrong, but it was nowhere near as bad as I was expecting.

For a while I’ve been in a dystopian slump. It just didn’t seem like there was anything the genre was offering that I hadn’t already seen before ten times over. Before reading Gilded Cage I loved the sound of it but wasn’t sure whether it would be more the same or something unique. Turns out I loved everything about it, the concept, the characters, the world, and now I’m very eagerly anticipating the release of book two.

A Crown of Wishes by Roshani Chokshi

This is a strange one to have on my list this week because I loved The Star-Touched Queen so much, and I was thrilled when it was announced there would be a second book being released. However when it was announced it was focusing on Gauri I was a little worried. One of the things I loved so much about The Star-Touched Queen was the magic and the world it was set in, I wasn’t sure where Gauri’s story would be set but when I started reading this book I was thrilled to see the same magic and wonder present in her story.

I wasn’t sure what this book was about before I picked it up so I didn’t really have any expectations going into it. Then when the first few chapters were formatted differently than what I was used to, second person POV, I was sure this wasn’t going to be a book I enjoyed. I was proved wrong though, and by the time I finished the third book this had become a favourite series of mine.

Again this was a book I didn’t really have any expectations about going into it. However it had been described as ‘perfect for fans of Red Queen’ which made me a little nervous considering I was not a fan of Red Queen. Still I had a copy and eventually got around to it and pretty much fell in love from the first chapter. Maybe there are some similarities to Red Queen but I enjoyed this book so much more.

Books I Loved Less Than I Thought I Would

Maybe my expectations were too high after reading A.G. Howard’s Splintered series, maybe I should have read The Phantom of the Opera before jumping into RoseBlood. Whatever the reason I was left disappointed by this book. I couldn’t connect with the characters and the story itself wasn’t enough to keep my engaged in the book.

The Crown’s Game by Evelyn Skye

This book was described as ‘perfect for fans of The Night Circus’, and based on the blurb I had some pretty high expectations for what I would discover when I got around to The Crown’s Game. However this book turned out to be a major disappointment. I expected a battle to the death between two powerful magicians and instead what I got was a competition to re-decorate Russia, add to that the insta-love and love triangle between the main characters and I just wasn’t impressed.

There aren’t that many fairytale retellings that use Rapunzel as inspiration so I was thrilled to discover Reign of Shadows. However after reading it there is not one thing I can pick out and say ‘well, at least I enjoyed that aspect of this book’. The characters were flat and it seemed like their development actually reversed the further I got into the story, the plot didn’t seem to go anywhere and the world building was full of holes. This is one series I won’t be picking up again.

The first time I read this book I really enjoyed it, I think I ended up rating it four stars, however re-reading it in preparation for the release of Glass Sword I just couldn’t understand what it was I loved so much about it the first time around. There were too many questions left unanswered in terms of the world and I just couldn’t connect with Mare’s character. Two issues that only got worse in Glass Sword.

I had high expectations for this book, especially when you consider it’s the first YA book I think I’ve ever seen that features goblins, and while the world building was amazing this was a story that really focused on the character development of Liesl. Liesl was a character I just couldn’t connect with, which unfortunately ended up spoiling the book a little for me.

So what do you think? Did you take part in this week’s Top Ten Tuesday, if so let me know what some of the books you loved more or less than you thought you would are.

74 thoughts on “Top Ten Tuesday: Top Ten Books I Loved Less/More Than I Thought I Would”