It’s hard to believe December, and 2016, are now over and I’m posting my December Recap. This year seems to have gone so quickly but at the same time looking back it seems like a long time has passed since January when I was still a relatively new blogger on WordPress. Despite some of the downs there have been a lot of positive moments during 2016 for me; I went to YALC back in July – and am looking forwards to going back again this year – I reached my one-year blogiversary, met some amazing people on WordPress and overall just had a wonderful time blogging during 2016.

December I finally got started on the ARCs I’ve been meaning to get around to for ages. Besides that though I announced the winner of my giveaway and answered all the questions you sent me for my one year blogiversary, I even got around to at least one series I’ve been meaning to for a while now. A good reading month and a good month to end the year as well.

Fantastic Beasts and Where to Find Them by J.K. Rowling

After seeing the film of course I immediately had to read the screenplay and relive the adventure. It’s always wonderful going back to the world of Harry Potter; this time learning more about magic in America and in the 1920’s.

Jennifer Niven doesn’t shy away from uncomfortable topics in her books, but everything is carefully written and gives an honest perspective into the issues. All the Bright Places was hard for me to read, but overall both her books were wonderful stories full of wonderful characters.

Holding Up the Universe by Jennifer Niven

All the Bright Places by Jennifer Niven

Along for the Ride by Sarah Dessen

I’m steadily catching up on Sarah Dessen’s newest releases and the next one was Along for the Ride. This was a wonderful story but then I expected nothing less from one of my favourite YA contemporary authors.

While I wasn’t a huge fan of the first book I am glad I continued this series because the story got so much better with the second and the third. Overall it’s a brilliant, though creepy in places, trilogy.

The Unbecoming of Mara Dyer by Michelle Hodkin

The Evolution of Mara Dyer by Michelle Hodkin

The Retribution of Mara Dyer by Michelle Hodkin

My True Love Gave to Me: Twelve Holiday Stories by Stephanie Perkins (Editor)

Normally I don’t read anthologies but it seemed like the perfect book to pick up just before Christmas, and I actually ended up really enjoying it. Definitely more hits than misses in this novella.

I was thrilled to receive an ARC of this book as it’s one of my most anticipated releases for 2017. Luckily my expectations were met; Wayfarer is the perfect ending to the Passenger duology.

I received a copy of this book from NetGalley.

Another ARC I was really excited for, though not as excited for Wayfarer I’ll admit. Frostblood exceeded all my expectations; it was an incredible book and one I’d recommend to everyone.

The Song of Achilles by Madeline Miller

All the Light We Cannot See by Anthony Doerr

Originally I wasn’t supposed to buy any books in December, and not just because I was on a book buying ban until the end of the year. I overspent on Christmas presents and I asked for a fair few books from friends for Christmas myself as well. However one of these was a pre-order and another was a Christmas present from my sister so overall I didn’t do too bad.

Every time I come up with a monthly to-read list there’s always at least one book or series I never get around to, hopefully January will be different. I have a couple more ARCs I need to get read and reviewed in January, but other than that it’s just going to be whatever I feel like picking up and getting started on. 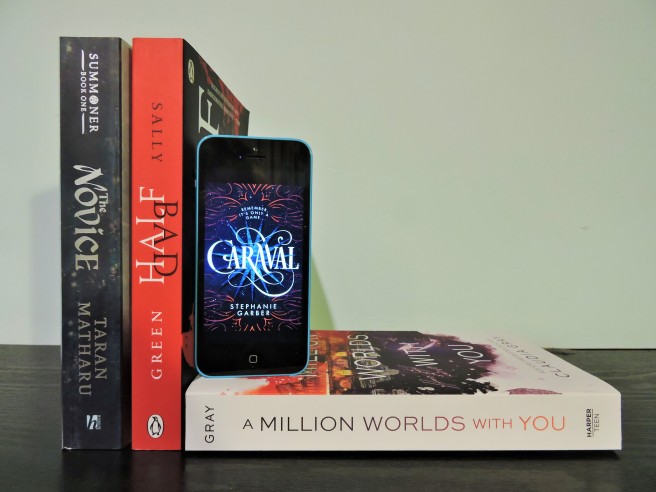 Welcome to Caraval, where nothing is quite what it seems.

Scarlett has never left the tiny isle of Trisda, pining from afar for the wonder of Caraval, a once-a-year week-long performance where the audience participates in the show.

Caraval is Magic. Mystery. Adventure. And for Scarlett and her beloved sister Tella it represents freedom and an escape from their ruthless, abusive father.

When the sisters’ long-awaited invitations to Caraval finally arrive, it seems their dreams have come true. But no sooner have they arrived than Tella vanishes, kidnapped by the show’s mastermind organiser, Legend.

Scarlett has been told that everything that happens during Caraval is only an elaborate performance. But nonetheless she quickly becomes enmeshed in a dangerous game of love, magic and heartbreak. And real or not, she must find Tella before the game is over, and her sister disappears forever.

A Million Worlds With You by Claudia Gray

A million universes. A million dangers. One destiny.

The fate of the multiverse rests in Marguerite Caine’s hands. Marguerite has been at the centre of a cross-dimensional feud since she first travelled to another universe using her parent’s invention, the Firebird. Only now has she learned the true plans of the evil Triad Corporation—and that those plans could spell doom for dozens or hundreds of universes, each facing total annihilation.

Paul Markov has always been at Marguerite’s side, but Triad’s last attack has left him a changed man—angry and shadowed by tragedy. He struggles to overcome the damage done to him, but despite Marguerite’s efforts to help, Paul may never be the same again.

So it’s up to Marguerite alone to stop the destruction of the multiverse. Billions of lives are at stake. The risks have never been higher. And Triad has unleashed its ultimate weapon: another dimension’s Marguerite—wicked, psychologically twisted, and always one step ahead.

In the conclusion to Claudia Gray’s Firebird trilogy, fate and family will be questioned, loves will be won and lost, and the multiverse will be forever changed. It’s a battle of the Marguerites…and only one can win.

The Novice by Taran Matharu

When blacksmith apprentice Fletcher discovers that he has the ability to summon demons from another world, he travels to Adept Military Academy. There the gifted are trained in the art of summoning. Fletcher is put through gruelling training as a battlemage to fight in the Hominum Empire’s war against orcs. He must tread carefully while training alongside children of powerful nobles. The power hungry, those seeking alliances, and the fear of betrayal surround him. Fletcher finds himself caught in the middle of powerful forces, with only his demon Ignatius for help.

As the pieces on the board manoeuvre for supremacy, Fletcher must decide where his loyalties lie. The fate of an empire is in his hands. The Novice is the first in a trilogy about Fletcher, his demon Ignatius, and the war against the Orcs.

Wanted by no one.
Hunted by everyone.

Sixteen-year-old Nathan lives in a cage: beaten, shackled, trained to kill. In a modern-day England where two warring factions of witches live amongst humans, Nathan is an abomination, the illegitimate son of the world’s most terrifying and violent witch, Marcus. Nathan’s only hope for survival is to escape his captors, track down Marcus, and receive the three gifts that will bring him into his own magical powers—before it’s too late. But how can Nathan find his father when there is no one safe to trust, not even family, not even the girl he loves?

Half Bad is an international sensation and the start of a brilliant trilogy: a gripping tale of alienation and the indomitable will to survive.

I hope everyone had a brilliant Christmas and a Happy New Year as well, hopefully 2017 will be better than 2016 for every one of you. Has anyone made any resolutions? I don’t have any concrete ones myself simply because I normally end up breaking them before January is over but let me know if you’ve got any you’re going to try and stick to.