Top Ten Tuesday is a weekly feature hosted by The Broke and the Bookish. Each week there is a new topic for bloggers to choose and list their top ten. This week’s theme is Top Ten New-To-Me Authors I Read for the First Time in 2016.

I’ve said time and time before that I’m shocked how quickly this year has gone, but looking back some of the books I read seemed like something I picked up last year at least. How was it only March that I started reading Sarah J Maas’s work, and was it seriously June that I started Wolf by Wolf? I was honestly surprised by some of the books I read this year because it feels like I’ve loved them, and the authors who wrote them, forever. 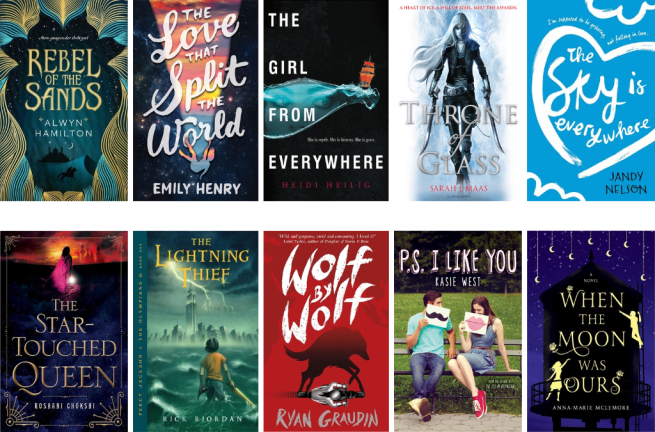 I discovered Alwyn Hamilton’s debut novel, Rebel of the Sands, on NetGalley and knew I had to read it. I was lucky enough to get an ARC and, although the start was slow, it was a brilliant book and now I can’t wait for the second one. I was also lucky enough to meet Alwyn at YALC as well and she is such a lovely person.

It was only after this book was released that I picked it up on a whim and started reading. I quickly fell in love with the characters, their romance, and their story. The Love That Split the World is one of my favourite magical realism books, and one of my favourite reads of 2016 as well. I can’t wait to Emily Henry’s next book to be released, I have high hopes for it after her debut novel.

Time travel is one of my all-time favourite sub-genres. All a book has to do is reference time travel and it goes straight to the top of my to-read list. The Girl from Everywhere sounded amazing and I was desperate to get my hands on it when it was released. It’s an amazing story with such a unique concept behind the time travel as well.

I was incredibly late jumping on the Sarah J Maas bandwagon, but after reading A Court of Thorns and Roses and after reading Throne of Glass I was addicted. I binge read all her books and now I am desperately waiting for the sixth Throne of Glass novel and the third A Court of Thorns and Roses one. There were some mixed reviews for Throne of Glass, which is why it took me so long to get around to it, but my expectation were low and in the end the book more than exceeded them.

The Star-Touched Queen was another book I discovered through NetGalley and, like with Alwyn Hamilton and Rebel of the Sands, as soon as I read the blurb I knew I had to have it. Once again I was lucky enough to get an ARC and as soon as I started reading I fell in love. Everything about Roshani’s writing, the world building and the story she wove, had me hooked.

Am I the last person to have started the Percy Jackson series? Probably not but it certainly feels that way.  Everyone was raving about these books and plenty of people told me to get started on the Percy Jackson series as soon as I could, so of course I did and of course I loved them. I have the rest of Rick Riordan’s releases on my to-read list but I am working my way through them slowly to savour the experience.

I saw so many amazing reviews for Wolf by Wolf before finally picking it up myself and even though my expectations were sky high the first book still ended up exceeding them, and Blood by Blood was even better which I didn’t think was possible. This is an amazing series, Ryan Graudin is an amazing writer, and if anyone hasn’t picked up Wolf by Wolf yet I would highly recommend it.

Next to Jandy Nelson and Sarah Dessen Kasie West is one of my ultimate favourite YA contemporary authors. I picked up P.S. I Like You after seeing an amazing review for it, loved it, and then binge read all the other releases she had. If you’re ever looking for a light-hearted and fluffy romance with a happy ending then Kasie West is an author I would highly recommend.

I received an ARC for When the Moon Was Ours and fell in love. The story was so beautifully written and both Sam and Miel were amazing characters to get to know throughout. Anna-Marie McLemore has become one of my favourite magical realism authors now and I am so excited to see what she comes out with next. Both When the Moon Was Ours and The Weight of Feathers are two books I would recommend for anyone looking for a magical realism story.

So what do you think? Did you take part in this week’s Top Ten Tuesday, if so let me know who some of your new favourite authors whose work you read for the first time in 2016 are.