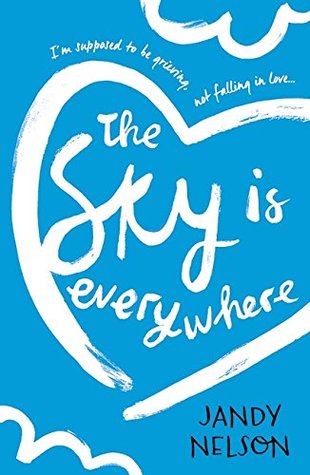 Title: The Sky is Everywhere

For fans of John Green, David Levithan and Rainbow Rowell: a beautiful, funny and heartfelt novel about love and forgiveness. Seventeen-year-old Lennie Walker spends her time tucked safely and happily in the shadow of her fiery older sister, Bailey. But when Bailey dies abruptly, Lennie is catapulted to centre stage of her own life—and suddenly finds herself struggling to balance two boys. One boy takes Lennie out of her sorrow; the other comforts her in it. But the two can’t collide without Lennie’s world exploding…

There once was a girl who found herself dead.
She peered over the ledge of heaven
and saw that back on earth
her sister missed her too much,
was way too sad,
so she crossed some paths
that would not have crossed,
took some moments in her hand
shook them up
and spilled them like dice
over the living world.
It worked.
The boy with the guitar collided
with her sister.
“There you go, Len,” she whispered. “The rest is up to you.”

I adored Jandy Nelson’s I’ll Give You the Sun so as soon as I finished I jumped right into The Sky is Everywhere. Both books focus on the characters and their journey, it shows them broken down by grief and by their actions before it slowly builds them back up again. Lennie lost her sister and suddenly her world is changed forever. It feels like there is a hole in her family where Bailey used to be and nothing can fill that hole. She pushes away her grandmother and her uncle, pushes away everyone except her sister’s boyfriend.

Toby and Lennie are drawn together by their grief, and though both of them feel guilty for betraying Bailey they cannot stop because Lennie feels that Toby is the only one who understands her grief. But the more time she spends with Toby the more she realises all the things she misses about her sister’s last few months, the secrets she kept and the life she would have lived had she survived.

Then when Lennie returns to school again, faces her classmates after the tragedy that fell on her family, she meets Joe; the new boy from France who plays the horn, the clarinet, the guitar. Joe makes her smile again, smile through her grief, he brings her out of her shell.

“I will never stop grieving Bailey because I will never stop loving her. That’s just how it is. Grief and love are conjoined, you don’t get one without the other. All I can do is love her, and love the world, emulate her by living with daring and spirit and joy.”

Lennie is lost without Bailey and she doesn’t handle it well. She seems to latch onto Toby because he was the other half of Bailey’s heart and she needs him to help her find her way through the grief. But Joe makes her smile again, he makes her feel things she never has before. The Sky is Everywhere is split into two parts; the first follows Lennie as she sleepwalks through life and through her feelings surrounding her sister’s death, but then Joe comes along and she seems to wake up again.

“Everyone has always said I look like Bailey, but I don’t.
I have grey eyes to her green,
an oval face to her heart-shaped one,
I’m shorter, scrawnier, paler, flatter, plainer, tamer.”

Lennie is a complicated character but we see her at both her bad and her good and I loved the journey she took throughout the whole novel. She starts off walking around in a cloud of grief. She writes poems for her sister and leaves them all over the city but she refuses to talk about her emotions with her grandmother or her uncle. Instead she bottles it all up, refusing to even pack away her sister’s things, keeping them around as a shrine to her.

But even before her sister’s death Lennie seemed to be slowly retreating into herself. She gave up her clarinet lessons, gave up on first chair in her school’s bad, gave up on her dreams of going to Julliard and gave up on playing. She became almost a shell of herself and it is only as she spends time with Joe that we really see the girl she once was when her sister was alive and when she was still playing.

“When he plays
all the flowers swap colours
and years and decades and centuries
of rain pour back into the sky.”

Joe seems to be the sun to Lennie’s darkness. He is bright, open, friendly, and always seems to be smiling. He likes Lennie from pretty much the moment he sees her and he is the one who reaches out to her; he doesn’t give up when she pushes him away. He draws Lennie out of her shell, makes her smile again; and he seems to do the same for her family. I loved Joe’s character, he is the kind of person everyone wants in their life and from the second they met Lennie clearly felt the same way.

“Oh, God,” he whispers, reaching his hand behind my neck and bringing my lips to his. “Let’s let the whole fucking world explode this time.”
And we do.

Her relationship with Toby was fuelled by grief, fuelled by missing Bailey and not properly knowing how to go on without her. The two seemed to crash together and when it was over they couldn’t seem to help feeling guilty, but at the same time they can’t stop reaching for one another. Lennie’s relationship with Joe was all light and happiness. He drew her from her grief and showed her there was a way for her to move on from what happened to Bailey. Lennie is always going to grieve over her sister, she is always going to feel lost and alone without Bailey but Joe helps her to smile again, to move past what happened and realise her sister wouldn’t want her to go on like she had been. There is kind of a ‘love triangle’ in this book but I didn’t think there was any doubt who Lennie would ultimately end up choosing.

I loved reading Lennie’s relationship with her family as well. Her whole life it had only been her, her sister, her grandmother and her uncle after her mother ran off when she was a baby to travel the world. Lennie and her sister used to make up stories about their mother’s adventures and her grandmother always used to say she would come home one day, but as Lennie discovers more about who her sister was she also discovers more about who her mother is.

“Sadness pulses out of us as we walk. I almost expect the trees to lower their branches when we pass, the stars to hand down some light. I breathe in the horsy scent of eucalyptus, the thick sugary pine, aware of each breath I take, how each one keeps me in the world a few seconds longer. I taste the sweetness of the summer air on my tongue and want to just gulp and gulp and gulp it into my body—this living, breathing, heart-beating body of mine.”

Lennie’s home sounds like such a beautiful place to live; there is so much to see and discover with Lennie as she wanders the woods with Joe or reminisces about the times spent with her sister. But there are still so many secrets in her home which she slowly discovers through the book. Grief plays a big part in this story and it is incredibly well-written, there were honestly parts where I felt like I was going to cry. This book is incredibly moving and everything Lennie felt I did as well as I was reading. She writes poems for her sister and leaves them all over the city maybe hoping Bailey will somehow be able to see them; poems which were beautiful to read. Anyone who has lost someone close to them can relate to how Lennie feels, how lost and broken, and this book was honestly a treat to read. If I could I’d go back and read it all again it was so beautiful.

I love Jandy Nelson, she is now one of my favourite contemporary YA novelists. Her books aren’t all cute and fluffy, there are so many deeper emotions that play a part and effect all her characters. The stories are all so moving you can’t help but love them, and the characters are so well-written and their relationships so touching you can’t help but root for them. Jandy Nelson has become one of my auto-buy authors and I can’t wait to see what she comes out with next.

What did you think of The Sky is Everywhere? Was it a favourite of yours or could you just not get into the story? Let me know.

29 thoughts on “The Sky Is Everywhere”