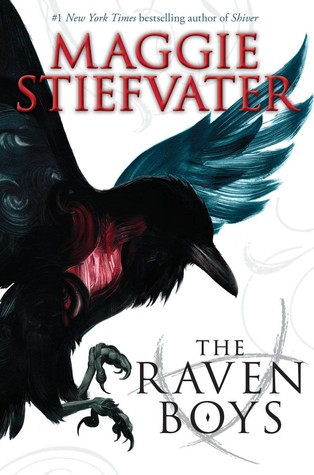 It is freezing in the churchyard, even before the dead arrive.

Every year, Blue Sargent stands next to her clairvoyant mother as the soon-to-be dead walk past. Blue herself never sees them—not until this year, when a boy emerges from the dark and speaks directly to her.

His name is Gansey, and Blue soon discovers that he is a rich student at Aglionby, the local private school. Blue has a policy of staying away from Aglionby boys. Known as Raven Boys, they can only mean trouble.

But Blue is drawn to Gansey, in a way she can’t entirely explain. He has it all – family money, good looks, devoted friends – but he’s looking for much more than that. He is on a quest that has encompassed three other Raven Boys: Adam, the scholarship student who resents all the privilege around him; Ronan, the fierce soul who ranges from anger to despair; and Noah, the taciturn watcher of the four, who notices many things but says very little.

For as long as she can remember, Blue has been warned that she will cause her true love to die. She never thought this would be a problem. But now, as her life becomes caught up in the strange and sinister world of the Raven Boys, she’s not so sure anymore.

From Maggie Stiefvater, the bestselling and acclaimed author of the Shiver trilogy and The Scorpio Races, comes a spellbinding new series where the inevitability of death and the nature of love lead us to a place we’ve never been before.

“Have you heard of the legends of sleeping kings? The legends that heroes like Llewellyn and Glendower and Arthur aren’t really dead, but are instead sleeping in tombs, waiting to be woken?”

Blue Sargent wants nothing to do with the Aglionby boys but on St Mark’s Eve when she sees the spirit of one of the students, a boy around her age who calls himself Gansey, she knows he will die before the year is over and she can’t let it go. She wants to try and help this boy only she has no clue how to find him, and what she’d even say once she has.

But the decision is taken out of her hands when Gansey makes an appointment with Blue’s psychic mother to find answers about what he is seeking. Ever since Gansey arrived in Henrietta he has been looking for Glendower, following the ley lines and camping out in graveyards on St. Mark’s Eve, determined to discover where the Welsh King is buried and wake him. After years he isn’t getting any closer, so when Adam suggests they visit a psychic to find answers Gansey figures it’s worth a try.

Blue and Gansey do not get along and when she sees him in her house, realising he is the Gansey she saw in the church, she doesn’t want it to be true. When she returns his journal to him, packed full of notes on his long search for Glendower, she finds herself drawn into their search and becoming a part of their select group. It’s while with Blue that the Raven Boys find Cabeswater; a magical place where time can either stand still or move through all four seasons in under an hour, a place where the trees talk, and where they see glimpses of the future. A place where magic is real.

“Adam wasn’t certain what came first with Blue—her treating the boys as friends, or them all becoming friends. It seemed to Adam that this circular way to build relationships required a healthy amount of self-confidence to undertake. And it was a strange dirty of magic that it felt like she’d always been hunting for Glendower with them.”

However Gansey has not been quiet about his search, and he is not the only one who has been searching to try and wake the ley lines. Seven years ago someone else attempted the ritual; some who, now knowing that Gansey, Blue, Adam and Ronan are searching for Glendower, decides once more to take up the search. However unlike Gansey and his friends this person is willing to do whatever it takes, stopping at nothing to be the one to wake the ley lines and take the power for himself.

“Blue was a fanciful, but sensible thing. Like a platypus, or one of those sandwiches that had been cut into circles for a fancy tea party.”

Blue is the only non-psychic person in her family, all she can do is amplify their gifts but she has no ‘sight’ for herself. Not wanting to be normal she uses her attitude and her fashion to make herself weird. Living her whole life surrounded by psychics Blue wants to experience magic for herself, instead of only hearing about it second-hand, which is what draws her to Gansey’s search for Glendower. Blue’s mother raised her to be independent, which backfires on her when she forbids Blue from seeing Gansey and Blue disobeys her.

“My words are unerring tools of destruction, and I’ve come unequipped with the ability to disarm them.”

Gansey has spent years in Henrietta searching for Glendower, it is the only reason he decided to attend Aglionby. He is the driving force behind their explorations and their search for the ley lines. His friends follow him but despite that Gansey feels helpless when they start falling apart; when Adam is beaten by his father, when Ronan starts flunking out of school, and when Noah disappears. Gansey is from an old-money family, he was born with that privilege and has never had to do without it, and it often causes him to put his foot in his mouth when talking to Blue or Adam.

It was always foretold that Blue would kill her true love, so when she sees Gansey in the church the connection between the two of them seems obvious. However when they first meet Blue and Gansey do not get along and Blue cannot see herself falling in love with someone like him. However the more time they spend with one another the more they seem to form a tentative sort of friendship. Gansey tries to say the right thing, to make Blue like him, but often without realising it he manages to make her angry instead.

“Being Adam Parrish was a complicated thing, a wonder of muscles and organs, synapses and nerves. He was a miracle of moving parts, a study in survival. The most important thing to Adam Parrish, though, had always been free will, the ability to be his own master.”

Adam is a scholarship student and he is constantly battling under the weight of his own insecurities. He isn’t rich enough to belong in Aglionby but he is determined to make his own way and gets angry when Gansey offers him help or money, thinking it’s pity of charity. He believes in what Gansey is searching for and the promise of the favour Glendower will grant to whoever wakes him, a favour he can use to make himself equal to Gansey and the other Raven Boys

There is something that drives all of them to find Glendower; Adam wants the favour, Blue wants to see magic for herself, Gansey believes he owes Glendower his life, Ronan is willing to follow Gansey anywhere he leads, and Noah has no other choice when it comes down to it.

“The king sleeps still, under a mountain , and around him is assembled his warriors and his herds and his riches. By his right hand is his cup, filled with possibility. On his breast nestles his sword, waiting, too, to wake. Fortunate is the soul who finds the king and is brave enough to call him to wakefulness, for the king will grant him a favour, as wondrous as can be imagined by a mortal man.”

Henrietta seems to be a magical place. A town where a house of psychics can tell you your future, and once a year they travel to an old church to find out the names of the people who will die that year. A place where ley lines exist and somewhere, buried among them, is a Welsh King sleeping through the centuries. A town where a woods like Cabeswater exists; which is magic in and of itself. The town where The Raven Boys is set is very richly written. Reading this book it seems like it could be any other town, where people live and work, but at the same time it doesn’t seem out of place that magic exists side by side with the normality.

The Raven Cycle was one of the series on my to-read list for 2016; I’d been meaning to start these books for a long time, having heard amazing things about them, and now I’m so glad I started the series. The Raven Boys was a little low to start but I loved each of the characters and the story Maggie Stiefvater is weaving with this series.

What did you think of The Raven Boys? Was it a favourite of yours or could you just not get into the story? Let me know.

8 thoughts on “The Raven Boys”