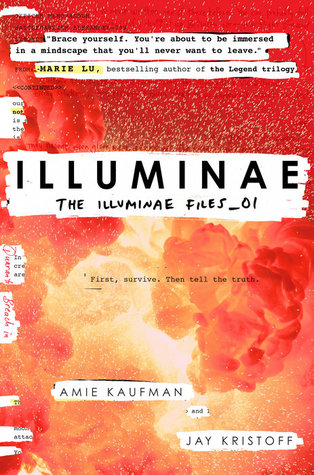 “The universe owes you nothing, Kady. It has already given you everything, after all. It was here long before you, and it will go on long after you. The only way it will remember you is to do something worth remembrance.”

There was a lot of hype for this book, and I’ll admit to being sucked into it a little. The idea of a story being told through hacked documents was interesting and I’d heard some amazing things about the graphics. So, despite the mixed reviews and the fact that I have not read any of Kristoff’s other works Illuminae went straight to the top of my to-read list.

Compared to all the other YA sci-fi books currently out there, even though it starts out like many others, Illuminae was definitely unique. Instead of a typical girl-loses-boy story the morning Kady breaks up with her boyfriend their planet, Kerenza, is attacked. To escape the slaughter and biological warfare unleashed they are forced to flee aboard the United Terran Authority vessels that answered the Kerenza settlements distress calls. Kady finds herself aboard the science vessel the Hypatia and Ezra ends up on the Alexander.

However it seems their problems have only just begun. The Alexander’s AI defence program, AIDAN, was badly damaged in the attack, the plague that BeiTech released on Kerenza is starting to spread, and the dreadnought Lincoln is close on their tails, determined to kill all survivors and witnesses. The engineers on the Alexander struggle to get AIDAN back up and running, aware they are sitting ducks without it, and all the while the Lincoln travels closer and closer.

“I look across the void. See the Lincoln.
The only uninjured member of the Kerenza assault fleet.
I turned the Zhongzheng to ashes and shrapnel.
Crippled the Churchill and Kenyatta and Magellan with a shrug.
But Lincoln…”

As I was reading I couldn’t help but think how similar the plots of both Illuminae and These Broken Stars, another of Kaufman’s collaborated books, are. Two people who have a tense relationship to start off with; but as the danger mounts they find themselves becoming closer and closer realising they can only rely on each other. Check. A big corporation willing to murder thousands of innocent people to keep a dark secret. Check. Fleeing from the enemy all the while digging deeper and deeper into the mystery hoping to uncover the truth and find some leverage to protect themselves. Check. A personal connection with the CEO of EvilCorp. Check. And it’s not that I didn’t enjoy Illuminae and that I don’t love These Broken Stars, but in some places it was like I was reading about Tarver and Lilac instead of Kady and Ezra.

“ATTITUDE: Ms. Grant displays strong anti-establishment sentiments, and has an awkward habit of questioning authority figures at all the wrong moments. This, combined with the intelligence she tries so hard to conceal, makes her something of a liability. It doesn’t appear ego is at play, as she is content to be viewed as average.”

Kady is not content to wait for the UTA to feed her pieces of information they deem suitable, she wants answers and she is determined to find them. She is a very private character, and not one to trust easily, but she cares about Ezra and is determined to do anything and everything she possibly can to save him.

Ezra on the other hand is willing to help the Alexander in any he can. They saved his life and Kady’s when they rescued them from Kerenza. He is a very open and trusting character, and in spite of everything that happened between them back on Kerenza he still obviously loves Kady and only wants her to be safe and happy.

While Kady and Ezra were the main focus of the story I didn’t really feel connected to them, maybe it was because of the way the story was written but they seemed to be very flat characters. We only saw them through IM messages, video surveillance, and emails so I don’t feel like we got to see much of their personality or anything really. Their relationship had the same problem. They had a history before ending up on the Alexander and it seemed like the story jumped into the middle of their relationship without giving us any background. It didn’t seem like there was any real interaction between the two of them which made their chemistry feel real or believable.

“You deserve every star in the galaxy laid out at your feet and a thousand diamonds in your hair. You deserve someone who’ll run with you as far and as fast as you want to. Holding your hand, not holding you back.”

One thing I did like about the characters was that there were no clear good or bad guys, other than BeiTech and the Lincoln. Is AIDEN considered evil because he destroys one the research vessels holding refugees when the Phobos plague threatens the whole fleet, or is he simply doing what he was programmed to do and protect the many at the cost of the few. All the characters are varying shades of grey and it makes them seem more human. They face horrible choices but they don’t shy away from them and instead they try to make the best decisions for the people under their command.

“The hull is torn open like wet paper, a massive gaping wound with the edges melted smooth.
Severed cables spit feeble sparks, crackling like fireworks on a still summer night.
But it’s not the destruction that gives her pause. It is the sight beyond the wound in my side.
The beauty and majesty of it all. What lays inside it. Between it and beyond it.”

While there was a lot of information on the UTA fleet, setting up the situation on the Alexander and the Hypatia, not much else was expanded on. There were so many questions I had about the Kerenza settlement that were just never answered. Maybe there was no way to include this without huge information dumps that would have been impossible to read through, but it seemed like there wasn’t enough background. Things were said by Ezra and Kady during interviews and IM’s that were just supposed to be accepted as fact with little explanation to back them up. There was plenty of action, and Kaufman and Kristoff did not shy away from death or the hard choices that were made but I would have loved it if the world building was expanded on.

While the plot was similar to These Broken Stars and there were a few information dumps in places which were hard to read I did really enjoy this book and I loved the way it has been put together. Amie Kaufman is an incredible author and I am definitely going to read some of Jay Kristoff’s other books after finishing Illuminae.

What did you think of Illuminae? Was it a new favourite of yours or could you just not get into the story? Let me know.